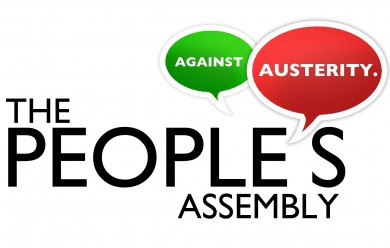 We face a choice that will shape our society for decades to come. It is a choice faced by ordinary people in every part of the globe.

We can defend education, health and welfare provision funded from general taxation and available to all, or we can surrender the gains that have improved the lives of millions of people for over more than 50 years.

We do not accept that government’s austerity programme is necessary. The banks and the major corporations should be taxed at a rate which can provide the necessary resources. Austerity does not work: it is a failure in its own terms resulting in neither deficit reduction nor growth. It is not just: the government takes money from the pockets of those who did not cause the crisis and rewards those who did. It is immoral: our children face a bleaker future if our services and living standards are devastated. It is undemocratic: at the last election a majority voted against the return of a Tory government. The Con-Dem coalition has delivered us into the grip of the Tories’ whose political project is the destruction of a universal welfare state.

We therefore choose to resist. We refuse to be divided against ourselves by stories of those on ‘golden pensions’, or of ‘scroungers’, or the ‘undeserving poor’. We do not blame our neighbours, whatever race or religion they maybe. We are not joining the race to the bottom. We stand with the movement of resistance across Europe.

We are clear in our minds that our stand will require us to defend the people’s right to protest, and so we support the right of unions and campaigns to organise and take such action as their members democratically decide is necessary.

We stand with all those who have made the case against the government so far: in the student movement, in the unions, in the many campaigns to defend services, the NHS, and in the Coalition of Resistance, the People’s Charter, UK Uncut, the environmental movement and the Occupy movement.

We do not seek to replace any organisations fighting cuts. All are necessary. But we do believe that a single united national movement is required to challenge more effectively a nationally led government austerity programme.

We have a plain and simple goal: to make government abandon its austerity programme. If it will not it must be replaced with one that will.

We will concentrate on action not words. We aim to provide the maximum solidarity for unions and other organisations and others taking action. We support every and all effective forms action and aim to build a united national movement of resistance.

Our case is clear. The government’s austerity programme does not work; it is unjust, immoral and undemocratic. Alternatives exist. Debts can be dropped. Privatisation can be reversed and common ownership embraced. A living wage can begin to combat poverty. Strong trade unions can help redistribute profit. The vast wealth held by corporations and the trillions held by the super rich in tax havens can be tapped. Green technology, alternatives to the arms industries, a rebuilt infrastructure including growth in manufacturing are all desperately needed. We are fighting for an alternative future for this generation and for those that come after us.

The People’s Assembly will support every genuine movement and action taken against any and all of the cuts. We support all current industrial actions by the unions. We encourage and will help to organise the maximum solidarity action with the PCS and teaching union members taking strike action the week after the People’s Assembly, as well as with other action by unions planned for the autumn.

Peoples Assemblies against the cuts should be organised in towns and cities across our nations, bringing all those fighting the cuts together into a broad democratic alliance on a local basis.

The national and the local Assemblies, in partnership with Trades Unions, Trades Councils, campaigning and community groups, can unite our movement and strengthen our campaigns. Local Assemblies will help us to organise a recalled National Assembly to review our work in the early spring of 2014.

We will work together with leading experts and campaigners both here and abroad, and friendly think tanks, to develop rapidly key policies and an alternative programme for a new anti-austerity government. We will continue to welcome support from all who fight the cuts.

We will call a national day of civil disobedience and direct action against austerity.

We will call a day of co-ordinated local demonstrations in the early autumn.

We will work with the trade unions and others to call a national demonstration in November.