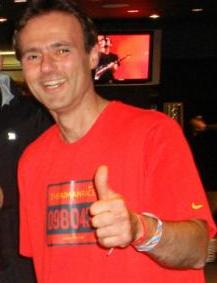 Paul Lorber, leader of Brent Liberal Democrats yesterday denied my story that a potential bid for the leadership LINK failed to materialise when the challenger's backer withdrew support. Lorber said that he couldn't help laughing when he read my blog but went on:

There was of course no attempt to challenge my Leadership of the Lib Dem group – although as a democrat I would have no issue if there was.

Two individuals had originally put their names forward for the Deputy Leadership of the Lib Dem Group. One later changed his mind.

As you know it was the Liberal Democrats who won the Dollis Hill by-election despite all the predictions of an easy Labour victory. We also came a good second in the Wembley Central by election.

I think most people recognise that the only party which can beat Labour in Brent are the Liberal Democrats. Despite giving you a clear run in Barnhill Ward you failed to take advantage of this.

A Labour victory in 2014 is NOT a foregone conclusion and what they fear most is an effective challenge which only the Liberal Democrats can mount. What Labour hope for is fragmented opposition votes so they can win with just 40% of the vote.

There are plenty of places where the Liberal Democrats are 2nd to Labour where some sensible tactical voting will help to kick Labour out. Todays ‘brilliant’ performance from Milliband will make our task so much easier.

The reference to 'fragmented opposition votes' and 'sensible tactical voting' merits further analysis. What message is Lorber seeking to convey?

The Brent Green Party has not yet started their selection process for the 2014 Council Elections.  Labour Party insiders say that their selection process has produced a slightly different profile of candidates,  moving it closer to the current Camden or Islington model. Brent TUSC have said they intend to put up candidates on an anti-cuts platform and some independent candidates may emerge from the various campaigns that have been fought since Labour took office.

On the parliamentary candidate front Martha Osamore LINK has not responded to enquiries regarding her intentions regarding a bid for the Brent Central Labour nomination.
Posted by Martin Francis at 18:14:00