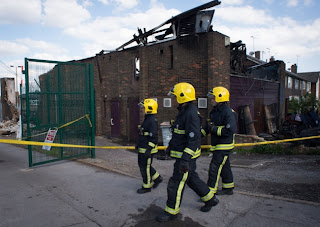 Unite Against Fascism has called a vigil after the letters ‘EDL’ – the initials of the English Defence League – were allegedly found graffitied on the Bravanese Centre in Coppetts Road, Muswell Hill, North London. The Islamic community centre was destroyed in a suspicious fire in the early hours of yesterday

Counter-terrorism officers with the Metropolitan Police are treating the fire as suspicious and investigating whether the attack was started deliberately in a racist attack.

At this stage it is not clear if the fire is linked to the murder of Drummer Lee Rigby in Woolwich two weeks ago but there has been a significant increase in reports of attacks against Muslims since his death
.
Unite Against Fascism says:

We are deeply concerned about the fire of the Bravanese Centre and the reported EDL graffiti. Our thoughts are with the Somali, Muslim and indeed all the communities in the area that have been affected by this incident. We ask people to join us at the vigil.

UAF launched the Don’t let the racists divide us campaign in response to the stepped up activities of the English Defence League (EDL), the British National Party (BNP) and other racist and far right groups in the aftermath of the murder, which have cynically attempted to exploit the murder of Lee Rigby to pursue their own agenda directed against Black, Asian and especially Muslim communities.

This has already led to a spike in Islamophobic attacks and a wave of assaults on Mosques. Muslim communities are experiencing verbal abuse, women’s headscarves have been torn off as well as more serious threats and violent attacks. Racists are simply stepping up their campaign. So too must the anti-racist and anti-fascist movement in response to this hate agenda.