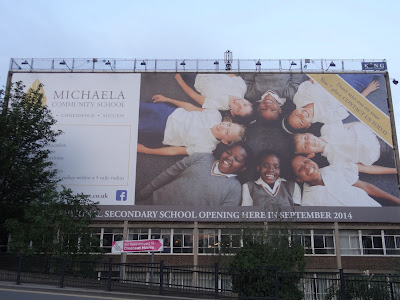 Wembley residents were aghast when they were confronted by this gigantic 'in your face' advertising hoarding opposite Wembley Park station this week.  The hoarding was fixed to the crumbling and possibly asbestos ridden Arena House, site of the proposed Michaela Community School.

Michaela is the free school brain child of Michael Gove acolyte, Katharine Birbalsingh.  The school failed to gain support at its recent consultation meetings and is now getting desperate for custom. Apart from the advertisiing hoarding they have managed to get on the front page of the Wembley and Willesden Observer this week with a plea for parents to get involved.

Despite being funded by tax-payers' money, to the detriment of other local schools badly needing cash for rebuilding, the school promises  'private school values' whatever that means. Krutika Pau, current Director of Children and Families, while admitting that the school was 'experimental' and had no track record, nevertheless thought it accorded with Brent schools' ethos. 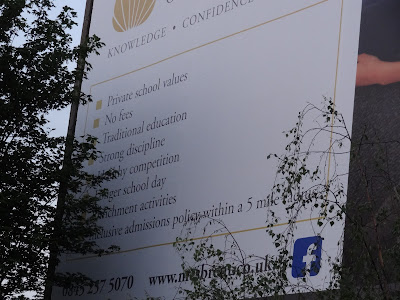 The school is now seeking Year 7 applications for September 2014. Parents should be aware that they will be choosing a pig in a poke compared with other Brent secondary schools which have (with the exception of Ark whose pupils have not yet reached examination age ) examination results and Ofsted reports to back up their claims. Michaela has no evidence to back up their assertions - parents have to judge whether their 'bigging up' of their plans amounts to anything substantial or is a risk too far in terms of their children's future.

Michaela's claim of being an 'Exceptional' school (word obscured by trees on the strap line of the advertisement) is based on nothing more than assertion. What does the Advertising Standards Authority say?
Posted by Martin Francis at 11:35:00

Is this the Old College of NW London building? If so I used to work there as a CNWL lecturer and can state that it is orginally an office block and is quite unsuitable for educational use. This is especially so because of its close proximity to some very busy and noisy railway lines. Even with windows closed teaching was almost impossible on the side neraest the railways, after protest from language lecturers who initially had their classes placed there, classes were mostly moved to the side of the building furthest from the tracks. Inspite of this teaching was difficult and windows tended to be kept closed which in summer meant excessively hot teaching rooms. How much did CNWL get for selling this educational white elephant? Did it actually sell it? How much public money has gone down the pan in the process of the college buying and selling it and other properties in Wembley and Kilburn?

Yes the very same Arena House. CNWL have moved everything across Olympic Way to Crescent House - away from the railway line noise etc. There are also plans to link North End Road up with Bridge Road which would leave the Michaela building on on 'island' between the railway and two roads. Nice eh? and very little play space...

That application was from an advertising company, which wished to put up large advertisements on the side of Arena House for 48 hour periods coinciding with big events at Wembley Stadium. Brent Council rejected the application in July 2008, and the company appealed. The Planning Inspectorate also rejected the proposal, saying that such a banner advertisement would have 'an adverse impact on visual amenity' and that it would be a 'source of distraction for users of the highway and create an unacceptable risk to highway safety'.

So, as well as breaching advertising standards, this giant advertisement from Michaela also appers to be in breach of planning regulations!
Philip.