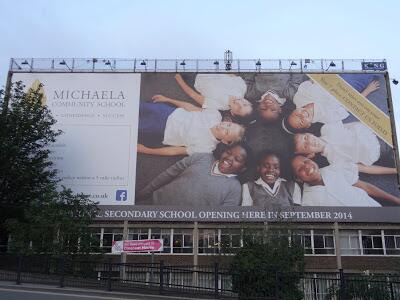 Following complaints from residents Brent Council confirmed this morning that the giant sign on Arena House had been erected without planning permission. Borough Planning Enforcement Officers are now investigating.

Suella Fernandes, vice chair of Michaela's governing body and daughter of a former Brent Conservative councillor, is a barrister specialising in planning law.

In 2008 a planning application for a similar sized hoarding to advertise Wembley events (ref 08/1287) was refused on the grounds that it would:

I would add other safety concerns if the hoarding became dislodged in high winds and ended up on the road or the nearby Chiltern, Metropolitan and Jubilee railway lines. Has the security of the fixing to the building been checked and a risk assessment completed?