I met Cllr Reg Colwill while out campaigning in the Kenton by-election earlier today. He claimed that Labour had been forced to apologise for, and withdraw, a leaflet that they had put out attacking the Conservative Candidate Michael Maurice. The Tories alleged the 'nasty' leaflet was 'full of lies' about their candidate.

According to Colwill, Labour are printing an apology that the Tories will distribute.

Since being recognised as the official opposition by Labour the Kenton Conservatives have been quiescent in contrast to their Brondesbury Park Conservative counterparts.

The spat may change this. 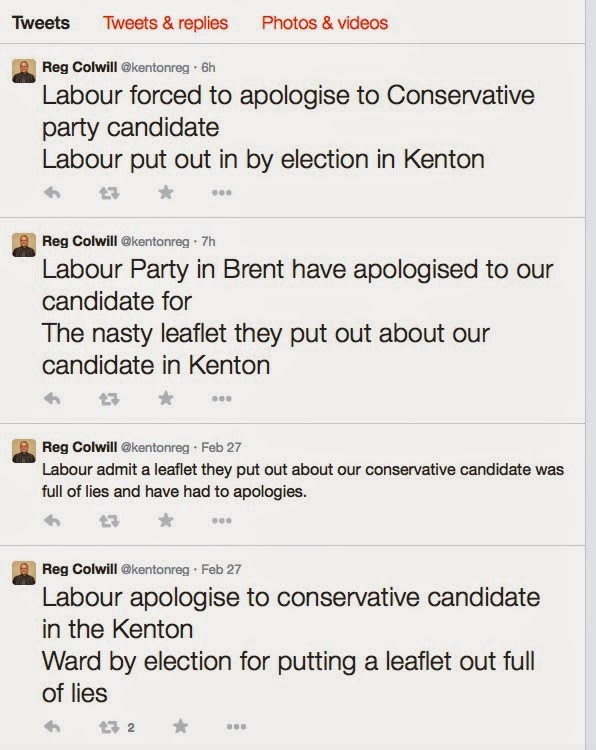 The other candidates in the Kenton By-election, where voting takes place on Thursday, are:

Rather reminds me of 2010, when Butler, John et al, had to write to every resident in Brent Central for the same reason.

It's actually pretty stupid: the agent can be imprisoned, would you believe.

What did the leaflet say?

Frustratingly I haven't seen it. The Labour one I saw today was innocuous - mainly about Labour candidate's rise from family fish and chip shop to accountant at Pricewaterhouse Coopers. Nothing about Maurice.

If it had a Labour strapline credit, then they have to have kept copies. An FoI, perhaps? ;)

Irony is:
Brent Labour complaining about 'cuts', which are the policy of their national party whilst putting forward a candidate that worked at PriceWaterHouse Coopers who are infamous for tax avoidance. What this also shows is that his time in the family business taught him nothing as it is through tax avoidance as aided and abetted by PWC that these multi-nationals are able to undercut small and medium size business and thus destroy our highstreets.

"rise" suggests that honest business is beneath Labour.

Political parties are not covered under FoI legislation and they can put out whatever they like. Would have thought you'd know that with your dodgy bar charts

So they are advertising the fact that he works for the nation's premier tax-dodging advisors? Astonishing!

Indeed. I suspect a chippie is rather more in touch with the everyday, too.

Labour have such a majority and yet have to still resort to dirty tactics.

Let's hope the voting public wake up and see Brent Labour have been fooling everyone for their own means of protecting those at the top.

Can an agent be imprisoned for dodgy bar charts?

Not new for Brent Labour - It happened in Queens Park Ward back when they lost all their seats over the Towerblock.
A very nasty leaflet came out from them with some lies about a very nice lady standing another party.
For some reason they are very very BITCHY and down right nasty.

Reg Colwill spoke to me personally and i reported what he told me. I have also republished his tweets on the matter. I have reported what he has said as 'claims' and 'allegations'. A copy of the apology letter (for Kenton) would be appreciated to substantiate the story.

The text of the apology from James Rooschove, Labour Party solicitor, for Vincent Lo, states that they gave false information in claiming that the Conservative Candidate Mr Maurice was not going to support the Conservatives at the by-election and wouldn't even be voting for himself. 'This was completely untrue and we sincerely apologise for the false information our leaflet gave and we are deeply sorry to Mr Maurice for any harm he has suffered as a result of our mistake.'

Good grief. Who on EARTH thought that was a sensible thing to publish in a leaflet?

PWC benefit Scroungers taking from citizens to put in the pockets of the wealthy.

Kilburn Times has published the story, including a copy of the defamatory leaflet here
http://www.kilburntimes.co.uk/news/crime-court/labour_party_apologises_for_distributing_defamatory_leaflets_about_conservative_rival_in_kenton_1_3975589

They should apologise for attempting to exploit the immigration issue, not just for using forged info.

The subtext of the flyer is that the Tories are soft on immigration, so presumably Labour will be tougher. This is nasty dog-whistle anti-immigration stuff. In Brent of all places. Despicable.

After Cara Davani being found via an employment tribunal to have racially discriminated against a former employee and Brent Labour use similar language !!!

This appears like a National panic from Labour as it may Labours vote in Scotland is likely to collapse.

Is this part of Labour nationally trying to compete with both UK and Tories on immigration ?

Are they saying that Kenton is an area where just because the Councillor's are Conservatives the population doesn't like immigrants?