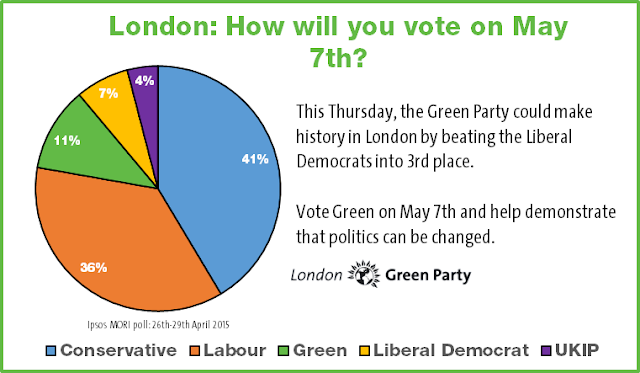 With just four days to go until the general election, polls suggest the Green Party could be about to make history in London by beating the Liberal Democrats into third place.

Polling by IpsosMORI gives the Green Party 11% amongst those certain to vote in the capital with the Liberal Democrats trailing on 7%.

The poll demonstrates a huge rise in support for the Greens in London since 2010 and cements their position as the third biggest party in the capital following their strong performance in the 2012 Mayoral and London Assembly elections.

Tom Chance, Co-Chair of the London Green Party and candidate for Lewisham West and Penge, said:


Of course this is exactly the news we want to be hearing just before the election but it reflects the feeling we’ve been getting on the ground throughout this campaign when our members have been out and about meeting voters. People are feeling let-down by politics in Britain and they’re hungry for an alternative to the austerity message being served-up on a daily basis by the “established” parties.

What is so exciting is that here in London we already have a great basis from which to deliver that change for voters. We finished third in the last Mayoral election. We have two assembly members, an MEP, and four councillors. This is giving us the base we need to build our influence and our presence.

Voters can go out to the polls on May 7th knowing that by voting Green, they’re contributing to a rapidly growing movement in London. We really are on the verge of making history.


Support for the Green Party in London has surged in the past year. Membership of the party has more than trebled and now stands at over 11,000. The party recently announced that they will be standing candidates in every seat in the capital and that they have achieved a 50-50 gender split amongst their candidates.
Posted by Martin Francis at 08:40:00

This poll still puts the Tories in the lead despite all the human rights abuses committed against vulnerable people on their watch.

A problem with opinion polls is that their 'online only' canvassing methods exclude people who for whatever reason cannot access a computer. And thus they become very blinkered into dissing anyone not of that world view when their mission statements say that they want to create a beter world for their customers and canvassers. I have blogged about that Pollsters 'vision' excludes those offline?.

A further problem with opinion polls is that along with mainstream media they increase hegemony and thus increase the marginalisation of vulnerable people. Will Work & Pensions debate sideline abuses against benefit claimants and carers?. Hegemony is "the social, cultural, ideological, or economic influence exerted by a dominant group."

If Iain Duncan Smith bottles out of debating on BBC Daily Politics today about how his government would engineer £12bn further 'welfare cuts', there is very little time to get the message out that the Tory method of censoring such a debate includes not turning up to debates and thus relying on electoral law rather than fairness to win their arguments for them. See Carer Watch's blog: Will Iain Duncan Smith turn up for welfare debate?.

They apply benefit sanctions stopping people's income for missing a jobcentre appointment that the benefit claimant has not received notification about. What kind of sanction could we apply to those who bottle out of debates and leave the outcome to the poisonous impact of smear stories that they have propagated about vulnerable people?

The extent of the unquestioned gulping down of such smear stories by the general public is to the extent that most political parties dare not speak out in favour of vulnerable people for fear of appearing 'too soft' on 'shirkers'. Another factor in lack of opposition to such cruel 'welfare reforms' is the guilt of Labour and Lib Dem politicians for helping set up such nasty laws in the first place.