Welsh Harp Centre to be leased out by Brent Council

Readers will remember that as part of their cuts Brent Council proposed to close the Welsh Harp Environmental Education Centre and a campaign was mounted to keep it open. LINK

We were told that alternative sources of management and funding were being sought including a possible funding agreement with Careys, the parent company of  waste processing company Seneca, which is based behind Wembley Stadium. Careys has extensive property in the area and has its own charity arm. At present they fund an additional teacher at the Centre. Oakington Manor Primary and Roe Green Juniors were also mentioned as having an interest in the continuation of the Centre.

The above advertisement appeared in the Brent and Kilburn Times yesetrday and rang alarm bells.  I have therefore sent the following message to Brent Council:


I refer to the advertisement in the Brent and Kilburn Times Ref: JXH/609/121. (attached)

I would be grateful if you could send me a copy of the Drawing referred to in the notice plus a response to the following questions:

1. How long is it envisaged that the lease to land and premises, including the office in Planet House will last?
2. Is it envisaged that the use of the land and premises will remain for educational purposes?
3. Is the land in question consecrated land subject to any change of use being agreed by the Diocesan of London? (see http://wembleymatters.blogspot.co.uk/2009/11/could-this-let-welsh-harp-rest-in-peace.html)
4. Is it intended that the building and land be leased to one of the following (or a combination): Carey's charity arm, Oakington Manor Primary School, Roe Green Junior School?

See below a copy of the drawing as requested above: 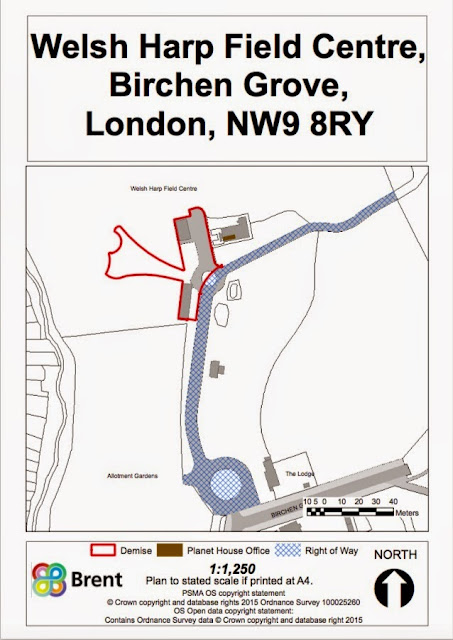