A correspondent has helpfully listed the Brent Labour councillors backing Khan. They are: 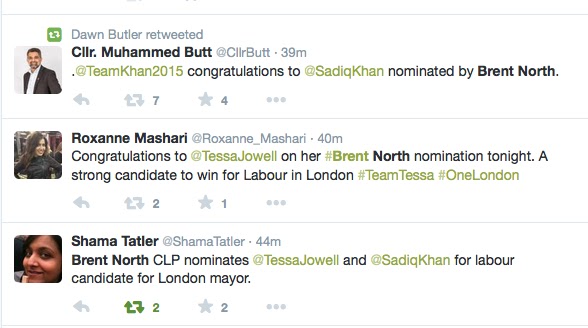 Tessa Jowell has at least actually done things for London, and has an independent turn of mind. Someone I'd perhaps support, which probably means the Brent Labour sheeple won'r.

Roxanne Mashari has been enthusiastically tweeting support for Tessa Jowell

Are the Lib Dems running someone for Mayor Alison?

Tessa Jowell has a great record of delivering for Londoners, like overspending on the Olympics by £6.4 billion. FOUR times the original budget.

Mayor Alison has a ring to it

Yes, there will be a Lib Dem candidate, not chosen yet.

I started off thinking that, but given the mega success they were... well, worth while, perhaps.

Isn't a nomination from Butt like he Kiss of Death?