The sllocation of opposition committee places is on the agenda for the next Full Council meeting on June 22nd.

In addition to the 8th Scrutiny Committee place the other positions are: 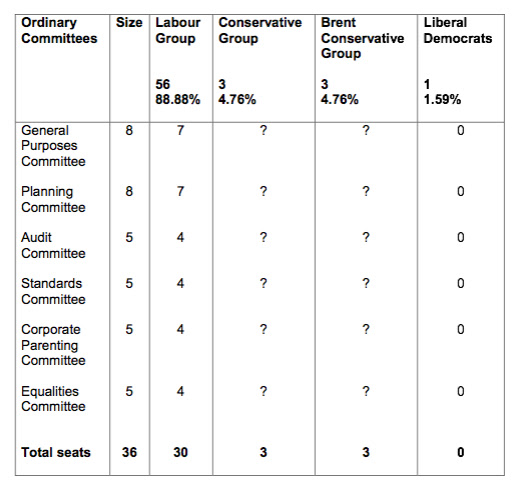 The Liberal Democrats are not recognised as a group because that requotes two or more councillors and they have only one.

Clearly these 6 places can be divided equally between the two groups giving each councillor a role. It will be interesting to see the distribution of 'compliant' and 'awkward squad' places.
Posted by Martin Francis at 11:38:00

There is a case for 6 by-elections here. Complete farce.

I would prefer Cllr John Warren on GP committee, Cllr Shaw on planning committee, Cllr Joel Davidson on Audit, Cllr Reg on Standards, Cllr Kansagra Equalities and Cllr Maurice on Corporate Parenting Committee. My suggestions are based on their past performance.