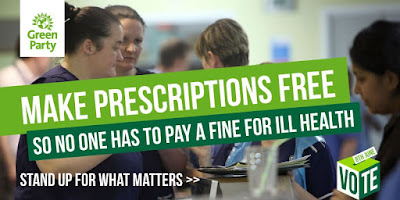 Caroline Lucas has announced the Green Party's plans to scrap prescription charges as part of its commitment to a national health service that’s genuinely free at the point of use.

Lucas said  the Government is fining people for being sick and creating barriers which stop people accessing the medication they need.

GPs have warned that the £8.60 prescription charge in England is forcing some people to make a choice between food and medication.

Scotland, Wales and Northern Ireland have already scrapped prescription charges, and the Green Party wants to adopt the same scheme in England.


Every day this Government is fining people for falling sick by charging for prescriptions. GPs have warned that prescription charges force some patients to choose between spending their earnings on food - or essential medical treatment. This is not acceptable. It’s also a false economy because not taking prescribed mediation can cause people to miss work and lead to additional GP or hospital appointments.


The NHS was founded on the principle of universal access to free, publicly funded and provided health care at the point of use. Prescription charges in England undermine that principle and the Green Party would not make people pay for access to vital medication.

Scrapping prescription fees would cost an estimated £550 million annually The Green Party argue these costs could be more than met by getting rid of the NHS internal market – a move which would save an estimated £4.5bn according to the Centre for Health and the Public Interest.