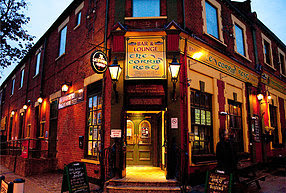 The planning application for the site of the Corrib Rest, Salusbury Road, Queens Park, will be heard this evening at Brent Civic Centre.

Save The Corrib campaigners have written the following to the Planning Committee.

We are campaigning for a better solution for the Corrib Rest pub and community rooms as we do not feel that the planning officers have grasped fully the community value of the Corrib planning scheme and its value to the wider community.

We would draw your attention to details which we consider are important and yet not considered in any detail.  we appreciate the workload of councillors is high and so have kept this simple without great detail and hope you can give this some of your attention.

The report fails to mention that The Corrib started as the Irish Culture Centre in the 1980's, and was a publicly owned building covering an area 4 times the current Corrib. In 2000 much of the Corrib was converted to social housing with the remaining portion being sold on the clear legal understanding that the public function rooms on the first floor were to be protected by the 106 agreement, ensuring that they served as a community facility.  They are, in effect a publicly owned asset, held in trust by Brent for the community.  Ashcross bought the building with the 106 conditions attached, it is these conditions, set in place to protect this asset that he now is asking Brent to ignore. Brent should resist this request and follow the example of Camden and reject the loss of community space.T

The report does not reflected the wider use of the Corrib, which extends well beyond the QPARA area. The report gives, we consider, undue due weight to the QPARA involvement to the exclusion of other parties.  The views of Kilburn, Kensal and Cricklewood residents associations are not recorded, nor are other stakeholders views included, for example, Tulip Siddiq's  letter of objection, is not mentioned. The planning history not addressed and the previous rejections are not outlined in sufficient detail.

The report does not address the local need for community space. The Corrib is the largest community centre in South Brent centre out side the Granville. There is no impact assessment on the loss of this facility and that existing resources are booked up for over 3 months. Brent will look extremely foolish if they give away their interest in this community asset at the same time as advertising in the Brent Magazine for community facilities they can fund, especially in Kilburn

The proposed 106 agreement is not compared with the existing and the report seeks to underplay the loss in space, facilities and access. The so called community room is 70% smaller than the current ones and the usage time is reduced by 50%. The new Corrib can only cater for a max of 225 persons whilst the existing Corrib can take up to 1000 persons

The main first floor function room, with its high ceilings, sky lights, spring floor, kitchen and bar is our "village hall". Its unique ambiance and airiness provide an ideal location for weddings, and musical events etc, as well as the usual leisure activities. The second function room also has a bar and kitchen. Plus the rooms can be combined to form a single room of over 350sqm. The rooms are accessed directly from the street via a magnificence stair case. The facilities also benefit from 2 sets of WC's and showers / changing room, topped of with disabled lift, access via rear.

In contrast the proposed room is 153sqm, has one shared WC opening directly onto it, the ceiling will be low, light and ventilation limited. Access is via 3 sets of doors, difficult for the elderly, impossible for those carrying drinks, also access is right through the bar area, not ideal for children or those who's religious beliefs require them to avoid alcohol. Lack of changing facilities will further reduce its amenity value. As does the lack of street access to Hopefield, as requested by 2 Hopefield residents

Report conclusion says ‘would make efficient use of site and reopen the pub. The Pub was closed by developer solely to enhance planning application and was viable and in use when sold.  It was sold just to fund one partners retirement fund.
The report missed out the fact that the loss of 530 sqm of space on first floor gives a gain to developer of £5M in property value. With a further £3M from the conversion of the 3rd floor.

The report dismisses the threat to the viability to the pub of the community room, which will reduce the bar area by 50% and will put the pub at risk conflicting with Brent’s policy to protect pubs and not convert them. CAMRA define this type of application as a "Trojan Horse", where the reduction of pub size deliberately aims to render it unviable leading to its eventual conversion to residential. The report fails to mention that looking at the layout of the pub it is clear that the massive hall way to the flats separating the community room from the pub will render this room unusable in the long term, thus finally killing the Corrib.

We consider there will be immense material and cultural harm to the community from the loss of this facility . We believe the rooms should be retained as set out in the existing 106 agreement and this application rejected.  We hope, for the benefit of the communities of Kilburn, you will agree also.

Regards
Kevin Barrett and Lloyd Fothergill
for the Save the Corrib Campaign
representing the near 2000 petitioners and 148 objectors
Posted by Martin Francis at 08:36:00