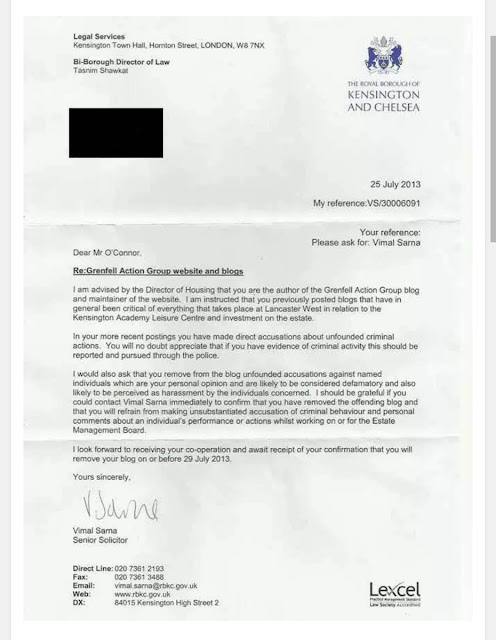 I am sure sure most of WM readers have seen this but in case some of you haven't, here is the letter from the Royal Borough of Kensington and Chelsea seeking to silence the Grenfell Action Group's blog.

I admire the group's courage and tenacity in resisting the threat as they persisted in speaking truth to power.

I see that the blocks at Watling Gardens are at present having work done on the outside of the buildings, and it may be that cladding is being put up. No doubt residents are concerned about safety aspects. It would be good to have some reassurance from Brent Council that this is being done to the highest standards of safety. Could Muhamed Butt give this reassurance?

Reminiscent of when Cllr Butt described this very news blog site as 'The Enemy'.

I can understand why Cllr. Butt has sometimes felt that "Wembley Matters" is his enemy.

It has published blogs highlighting how he has abused his power, such as stopping Martin from presenting a deputation to Full Council in September 2014 which would have given councillors the chance to question his extension of Christine Gilbert's tenure as Interim Chief Executive (which could be considered to have been illegal).

It has published guest blogs from me, which have been highly critical of Cllr. Butt's actions over a number of matters in connection with the Rosemarie Clarke Employment Tribunal case and its aftermath.

And it has given local people, including Council staff and councillors, the chance to comment (anonymously, if they wished to) on such matters, and provide information.

That information may still prove to be useful in challenging abuses of power, up to 2015, by those in leadership roles at Brent, as part of objections by five local electors (of whom I am one) against the Council's 2015/16 accounts, including the pay-off of £157,610 to Cara Davani two years ago, which we allege was unlawful.

Cllr. Butt may not like "Wembley Matters", but I am grateful for Martin's efforts to keep local people informed about what is going on in our area, and for giving us a blog site which provides an opportunity, for those who care, to try and hold the Council and its leadership to account, for the benefit of our community.

I think Butt thinks residents are the enemy. Having seen recently how he lost his temper when challenged by a bunch of them, he obviously has no liking for them. This was, by the way, at a consultation for taking property back in house and abolishing the BHP ALMO. Promises were made that people would be contacted and concerns followe up rapidly. Guess what.