The cost of allotment neglect in Brent 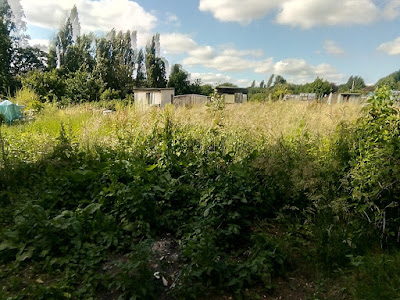 In Spring 2016 Brent Council consulted on the possibility of our allotments becoming self-managing. Allotment holders were not enthusiastic LINK and as far as I know none, apart from Kingsbury which was already self-managing, opted to self-manage.

I spoke up for the then Council Allotments Officer and the fine job she did but shortly afterwards she was gone.  Without a named officer the role was taken over by the depleted parks department - depleted after Veolia took over the maintenance contract for parks and the Green Flag scheme was abandoned.

Now the Birchen Grove site,  where I have two plots, is looking neglected and overgrown.  There seems to be no system of checking on active cultivation and  expediting the reletting of abandoned plots although I understand there is a waiting list and the Council is supposed to be encouraging local food cultivation LINK

The practical effect of plots being overgrown  is that they are much harder to bring back into cultivation and any new allotment holder can become demoralised by the sheer hard work involved. Grass and weed seeds spread over neighbouring cultivated plots and become a nuisance,

I would be interested to hear about experiences on other Brent allotments and perhaps Cllr Krupa Sheth, Cabinet member for the Environment, could look into the issue. It would be useful for the Scrutiny Committee to review the success or otherwise of the Council's Food Growing and Allotments Strategy.

Meanwhile, following other examples of neglect of council resources such as garages on estates, there is a fear that pictures of neglect and low use rates such as those above, could lead to justification for a polocy of selling off  allotments to be used for housing developments.
Posted by Martin Francis at 10:20:00

Brent Council are reputed to be saving a whopping £450,000 per annum on their budget by not cutting grass in all the parks in Brent. Whoopee, now our Municipal Parks look unloved, uncared for, and basically shit. No space for informal play, loads of rubbish caught up in the long grass, Dog mess in abundance as the owner can't find s**t to pick it up. Whilst the NHS claims that Green Open Spaces and Parks save the NHS millions a year. In Brent we only have 14% Green Space. 20 Years ago the majority of Parks in Brent had Green Flag status. Where did it all go wrong? Forget me if I missed the message but didn't Brent Council big up the fact that they wanted a Healthier Brent? They care about Clean Air and want to reduce our Carbon Footprint? Or are we all to believe they just shooting a breeze? and promoting good PR BS.

Where I live (Barn Hill Ward) our grass verges have now been cut twice in the past 6 weeks so I can't complain about that although I know it's down to our local Councillor Shafique Choudhary who keeps on eye on things & makes sure our area gets done. Regarding the allotment issue in the above article it's so obvious that Brent are deliberately running down these areas so that they can sell off the land for more concrete jungles to appear in our 'glorious Borough'!!

Update,King Eddies Park, after much moaning and groaning by me and some other concerned residents Brent Council's contractor Veolia have now cut an area of grass on the right hand side at the top of the park to ensure it's fit for informal play, and now cutting grass at other end where football and cricket is played, however they have still not marked out pitches. As yet no Goal Posts have been installed.

The grass verges on the Sudbury Court Estate were cut for the first time 2 weeks ago having been left to grow for months. The grass cuttings were strewn across the pavements and into the gutters. Should there be any heavy rain the drains will become blocked and overflow. Clearly the operatives did not pick up any of the rubbish lurking within the long grass before it was cut and as a result tin cans, bottles and general litter now add to the layers of grass cuttings. Is this Brent Council's idea of introducing Wild Flowers to the borough ?

Maybe Brent Council should use some of the saved £450,000 to control the Oak Processionary Moth infestation that is rife in Brent. The caterpillars pose a major and serious health risk. The large oak tree near to the entrance of Wembley Primary School has a number of moth/caterpillar nests. This is of concern especially as the tree is on the well-used route into the school by parents and pupils.

Jaine,
I have to say that I agree with everything that you wrote because I also that what we are seeing in terms of poorly looked after parks
is the consequence of brutal cuts to funding.
It was bound to happen because it simply is not possible to maintain high standards ( if they ever existed that is!!!)
on an ever dwindling budget.
Brent council of course expect us to believe that things aren't as bad as they seem
but I think that we know better.
Its just a matter of waiting (in vain) for them to accept it.
As for Brent being 'healthier' I can't see how that is possible when just about every shop in town has more takeaways than they need.
The packaging often ends up being dumped in parks and is often left there for long periods of time.
I don't need to wonder why because the answer is clear to you and I.