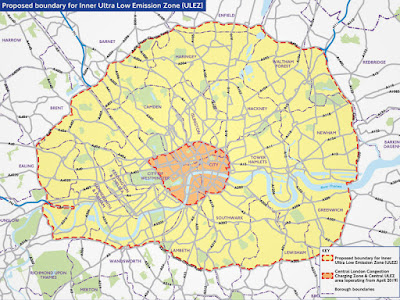 The Government should bring forward a properly funded diesel scrappage scheme to help residents when the Ultra Low Emission Zone expands in 2021, Brent Council said today. The ULEZ and expanded ULEZ will replace the recently introduced T-Charge but the Congestion charge will remain.

The council has been a big supporter of the Mayor of London's campaign to bring cleaner air to the capital, but wants solid measures in place to ease the transition for residents and businesses - in some of the poorest parts of London.

The expanded zone will stretch to cover the south east of the borough, including Stonebridge, Willesden, Harlesden and Dollis Hill. Areas above the North Circular, such as Neasden, Wembley and Kingsbury, are not part of the scheme and neither is the North Circular Road itself.

Residents inside the expanded zone and vehicles with a disabled or a disabled passenger tax class will have a three year sunset period, with a 100 per cent discount ending on 6 September 2023, to give them an additional chance to meet with the standards. Also, minibuses operated by charities will have a two-year sunset period until October 2023 to replace their vehicles.

Although welcoming these concessions the Council wants protection for people who live on the edge of the zone, in addition to a discounted rate within a buffer zone along the new boundary for those residents who need to travel across it regularly to get between work and home if no cost effective travel alternative is available.

With 33% of households in Brent living in poverty, the Council wants to be sure that the expanded zone will not place an extra burden on residents.

It comes as the Council marked National Clean Air Day with stalls and activities at the Civic Centre.

A number of leading clean air groups including; Vehicle Idling Action and Friends of the Earth hosted stalls outside in the Market Square, with local MP's Barry Gardiner and Dawn Butler joining Brent Councillors and others to sign a clean air pledge.


We fully support the Mayor's commitment to getting London's air cleaner, but we need the Government to do more to encourage us all to adopt more sustainable forms of transport. The expansion of the new zone will help, but as it cuts our borough in half we want to make sure that residents won't be unfairly penalised. Hardworking Brent residents and businesses, many of who struggle to make ends meet, should not be adversely impacted.