More on the state of Brent's parks & the 'meadows' debate 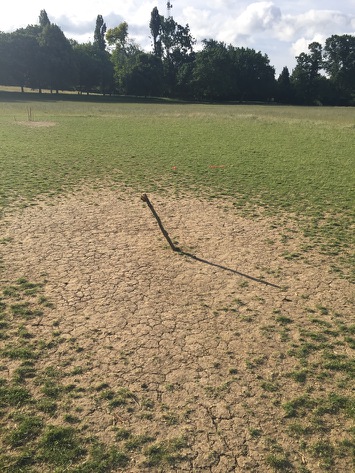 There's quite a debate going on regarding the state of Brent's parks on social media.  The 'creation' of meadows  was a decision based on saving money (£0.5m) backed by a claim that it would support natural diversity LINK. It has been implemented by  simply  not cutting the grass. Some are happy for sections of the parks to be left unmown hoping it will provide diversity for nature but others point out that real wild flower meadows need proper planning and maintenance.

Meanwhile a reader has sent me the above photograph of the 'cricket pitch' at King Edward VII park in Wembley commenting, 'I forgot how much they spent on doing this but they shouldn't have bothered.'

There is an extensive discussion about the issue on the View from Dollis Hill Facebook page regarding Gladstone Park. LINK

As a contribution to the meadows debate here are pictures of the meadows and 'scrape' at Mason's Field in Kingsbury where the Barn Hill Conservation Group has transformed a former playing field into a meadow. The transformation involved a substantial amount of work by volunteers including planting thousands of plug plants. See LINK.

Similar work was done at the University of Westminster wild flower meadow which is hand-scythed at the end of the season. 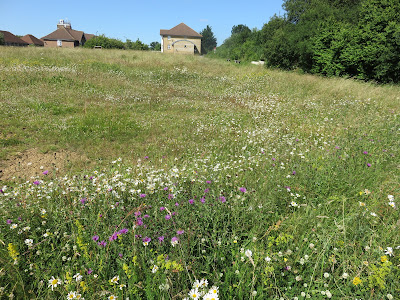 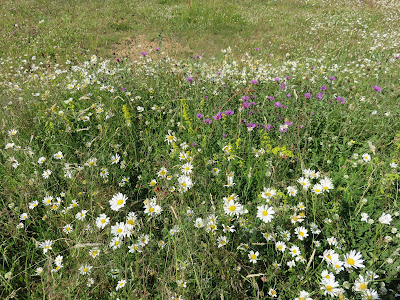 By contrast this is a view of one of the Gladstone Park meadows: 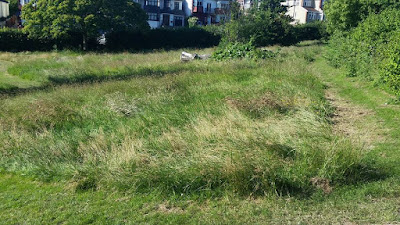 RE WOODCOCK PARK: I have written three times to Brent saying that as part of a group of responsible dog walkers in Woodcock Park, we are having problems finding and picking up poo after our dogs. My dog is very 'private', she goes off to do her business, and when I go to find it, its impossible. On the rare occasion when I have been lucky to find it, its again impossible to pick it up, even with a hand held pooper scooper, because of the long grass. God knows what else is lurking in that grass. Hopefully after your meeting Brent will cut the grass a little bit more often. It used to be such a beautiful park, now it looks neglected!

It would appear that the meaning of "natural diversity" to Brent Council and Veolia is...rubbish,litter and brown dried ground rather than wild flowers.
Congratulations to Barn Hill Conservation Group and University of Westminster. Their areas look beautiful and are clearly the result of a great deal of planning and hard work.

Much of the debate seems to revolve around the question of what constitutes a meadow. This seems to me to largely miss the point. A meadow is essentially a device for feeding animals; an urban park is an area for the leisure and recreation of local people. Even if it were possible to turn all of Brent's parks into meadows, it would not be at all desirable to do so.

It would be perfectly possible to set aside small areas of unmown grass for the benefit of wildlife; this has been done for many years in the Royal Parks and in RBG Kew, and presumably there has been research done into the effects.

At least the unmown grass is the result of a deliberate policy decision. The generally very poor state of all the borough's parks - planted areas infested with weeds, damaged trees, rampant bindweed and brambles - is simply the result of very poor management by Veolia, who do not appear to me (a professional gardener) to employ anyone with any horticultural training. And, of course, the complete failure of Brent to monitor its contractor, Veolia. Philip Bromberg