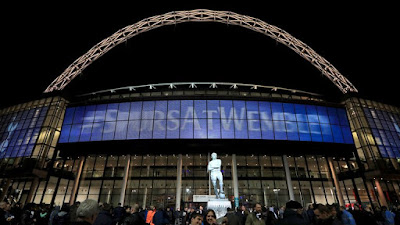 Residents who breathed a sigh of relief that they could soon go about their business in Wembley at weekends without the traffic jams and suspended bus routes associated with Spurs occupation of Wembley may have to think again. Tottenham's stadium may not be  ready for the new season and an announcement on Brent Council's website clearly doesn't see that as a problem:


Tottenham Hotspur will play their first game of the new football season at Wembley, against Fulham on 18 August 2018.

With the development of their new stadium yet to be completed and a number of test events due to take place before it can be officially opened, Tottenham have asked to again use Wembley for their opening fixture.

Tottenham have stated they will move into their new stadium in time for the Liverpool fixture on Saturday 15 September 2018.

However, until that is contractually confirmed, Tottenham retain the option to play home games at Wembley up until 7 October 2018 and Champions League games up until 12 December 2018.

Any Tottenham games at Wembley next season will be accommodated within the existing planning permission for the Stadium, and be part of their agreed programme of events for the year.

They have by passed the need for a new Planning Permission by being accommodated by the FA who are absorbing the Spurs games within the existing 'Large Events'(as per the last sentence above). Local people have therefore been denied of a chance to have their say.

What a load of s**t thought they had long gone. FA specifies they should play all home games at the Stadium for the whole season. Guess it's a case of Money Talks and Bullshit Walks

It's just for one game anyhow. As much as I detest them coming back even I can handle it for just one more game. It's in the interest of Spurs to get into their new stadium ASAP! The FA & Brent Council can dream on if they think they've got them for an entire season again.