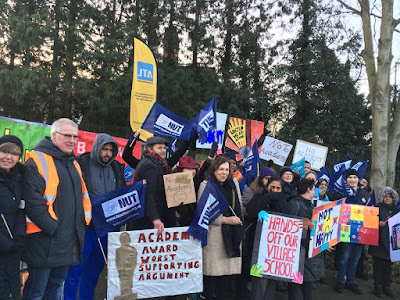 Kay Charles, executive headteacher of The Village School and Woodfield Multi-Academy Trust, has given the National Education Union written assurances on the three outstanding issues involved in the recent strikes which were aimed at safeguarding staff conditions of service following the The Village  School governing board's decision to academise to form the Trust.

1, A clause will go into the school pay policy stating that all national pay awards will be honoured.

2, The TUC model union agreement will be adopted which gives all the union rights, and more, enjoyed by staff when The Village was a Brent local authority school.

3. Human Resources policies will be protected by a 5-way lock (not 6 as requested) but with added written agreement that  model Brent and union policies will be used as a benchmark if any policies are changed in the future, as well as written assurances that policies will go to unions and then staff, before going before  governors and trustees.

On the basis of these concessions a meeting of union members voted by a majority to suspend all strike action pending the governing board's meeting in July when it is hoped these documents will be presented and agreed.

It will be made clear by the NEU that members are not stopping all action; they are only suspending it for now and it would re-start if the decisions are reversed.

Jenny Cooper, NEU,  The Village School, in a message to members said:


For now, things are looking good. What we have now is the most democratic and union friendly Multi-Academy Trust anywhere in the country and that, for us, is a massive victory and has only been achieved through the sheer determination, sacrifice and fight of all of you united.

None of the protections we now have were intended. We have got them purely because of the campaigning, bargaining, twelves days of strikes and three threatened strikes, plus a 100% yes vote in our last ballot and a 100% yes vote in Woodfield's indicative ballot.

We done to you all. We feel really proud to be reps of a union group that is famous across  the country and influencing so many other campaigns.

Hold on to that thought, hold on to your dreams and fighting spirit (it may be needed again), stick together and support each other.