UPDATED: Brent Council set to borrow £110.5m part of which is to purchase units from Quintain for key worker housing 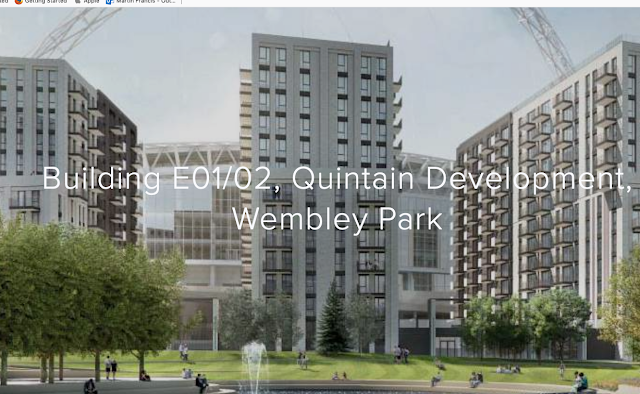 This article has been updated with additional clarification and correction from Brent Council.  The Room 151 article on which the original article was based contains errors according to the Council so I have removed it from this post.  Apologies for any confusion over what is a very complex proposal. MF


The Brent Council Cabinet is poised to approve a huge financial arrangement part of which would be for the purchase of units in a block which is one of four in the Quintain  development known as E01 and EO2. The particular block would cost a proportion of the proposed loan of 'up to' £110.5m.  The amount has not been disclosed publicly yet due to ongoing commercial negotiations with Quintain.

In addition there will be purchase of  shares by by Brent's investment company i4B or its housing company First Wave Housing for Phase 2 of the scheme.

The four blocks range from  12 to 15 storeys and are close to Wembley Stadium. The Cabinet paper refers to just one of those blocks.  Some of the flats would provide key worker homes for those on moderate incomes.

The Council would purchase 153 units: 63 one bedroom and 90 two bedrooms.   Key worker housing is badly needed in Brent with social workers, teachers, police and NHS staff being priced out of the borough and resulting poor recruitment and retention rates.

A £21.8m share purchase for Phase 1 was for the existing programme of purchasing homes to provide affordable housing for Brent residents who might otherwise be placed in bed and breakfast or other temporary accommodation. Brent Council says that more than 500 homeless residents have already found homes through i4B and the £21.8m is part of the financing package for these homes.


The acquisition is subject to negotiations with Quintain lead by the Operational Director of Property and Assets on behalf of i4B and FWH. Negotiations includethe timing of payments to Quintain and potential future financial obligations. The loan drawdown will be executed once these terms are agreed.

It is suggested that i4B/ FWH’s drawdown of funds to purchase the Quintain E01 02 block is contingent on the usual due diligence relating to blockpurchases and providing loans.

It is recommended delegated authority is given to the Director of Finance to determine when the due diligence is adequately completed. For example, the Director of Finance’s considerations would include:(i)the robustness and affordability of operating assumptions relating to theblock; and(ii)the adequacy of protection for i4B/ FWH under different scenarios, including contractual default by Quintain.

A decision by the Treasury on Wednesday to increase the Public Works Loan Board 50 year new maturity loan rate from 1.81% to 2.82% may put the kibosh on the Council's plans. LINK

The Cabinet report notes the benefits and risks of the proposal:

(i) any future financial obligations entered into as part of the Heads of Terms with Quintain;
(ii) operational profits or losses associated with managing the block;
(iii) the block’s value increasing or decreasing over time (capital gains or losses).