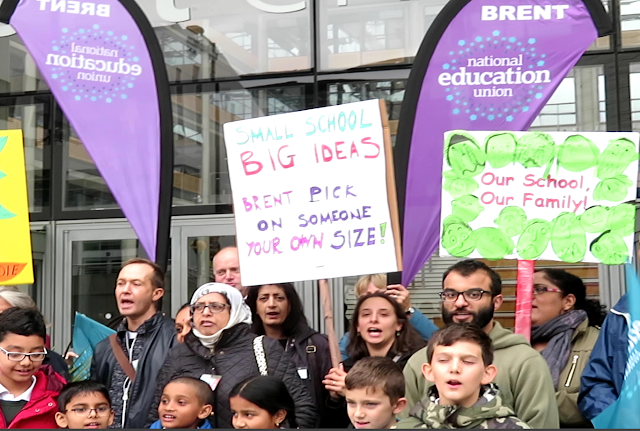 Tonight staff, parents, pupils and supporters from the community will converge on Brent Civic Centre in Wembley to demonstrate solidarity with Roe Green Strathcona School's spirited fight against Brent Council's decision to close the school. There will be a demonstration outside the Civic Centre from  4.30pm and then people will attend the 6pm Scrutiny Committee which is hearing the call-in of the Cabinet's decision made by eight Labour councillors.

A broad range of speakers are expected to argue that the closure decision was based on inaccurate information with the Council failing to properly consider the strength of local feeling and the alternative proposals put forward by the school.

The closure decision is important as it sets a precedent for other potential moves to close, shrink or amalgamate schools as a result of falling pupil numbers. The National Education Union will be keen to protect their members, who now include support staff as well as teachers, from compulsory redundancy. Most Brent primary schools still come under Brent Council oversight and the Council is the ultimate employer.

The last time falling school rolls hit the primary sector was in the middle and late 1970s resulting in considerable disruption and despondency. With Brent primary schools currently  performing well against national standards it is essential that parents and staff have confidence in the fairness and effectiveness of the local authority.

At a national policy level falling rolls present an opportunity to reduce class sizes in the state sector to begin to match those of private schools.
Posted by Martin Francis at 08:49:00