If you were standing in Kingsbury around 20,000 years ago, you probably would have had cold feet! The area was just at the southern edge of the ice sheets that covered much of Britain during the last Ice Age. The glaciers had left a covering of gravel over the underlying clay, and as they receded, the melt-water formed rivers that flowed south into the Thames. Over the centuries, they cut valleys into the landscape. Two small rivers, the Dollis Brook and Silk Stream, combined to form the River Brent, and that is where our story begins. 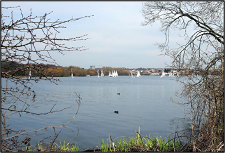 1. Looking across the reservoir towards West Hendon, c.2010.
Although some of this series is based on my own research, I could not have written it without the knowledge I gained from my friend and fellow local historian, Geoffrey Hewlett, who sadly died last year. I assisted him, mainly on the illustrations side, with his 2011 book “Welsh Harp Reservoir Through Time”. I learned so much of interest from him about this beautiful area, at the heart of our borough, that I want to share with you during this difficult Covid-19 period.

We don’t know when people first lived in this part of Brent, but they were definitely here by the late Bronze Age (around 1,000 to 600BC). There are old records of pottery funeral urns, dated by archaeologists to the Deveral Rimbury period, being uncovered during work near the edge of the reservoir. Unfortunately, these have disappeared, and the exact location of the find was not recorded. Geoffrey worked at Brent Council, and when he was asked to suggest a “historical” name for a new road near the reservoir, off of Birchen Grove, he wrote down Rimbury. A typist misread his joined-up writing, so Runbury Circle commemorates the find!

Moving on into the Iron Age, farmers from Celtic tribes (originally from Central Europe) came to the area, and the Brent is thought to have got its name from their goddess, Brigantia. The Celts were pushed further west by later immigrants, and the next hard evidence we have of people living here is of farms during the Roman period, on the more easily cultivated gravel soils at the top of Dollis Hill and Blackbird Hill. Finds of 3rd/4th century Roman pottery have been dug up at both sites, as well as a Roman coin of Constantius II (337-361) in the reservoir. 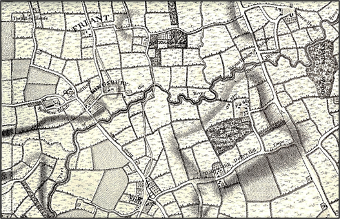 3. The River Brent valley between Kingsbury and Dollis Hill on the 1745 Rocque map. (Brent Archives)

I covered much of the Kingsbury area’s agricultural history in The Fryent Country Park Story, so I will jump forward to the 18th century, and developments which would lead to “the Welsh Harp” being created. Britain’s “Industrial Revolution” had begun, with the need for much greater quantities of raw materials and manufactured goods to be moved about. Roads were in a poor state, and a horse could pull much more weight in a boat than on a cart (as well as more safely for fragile items like Staffordshire pottery). It was time for canals.

Many shorter canals had been built since the 1760s, but it was the Grand Junction Canal, from the Midlands to the Thames at Brentford, that provided the main link to London. Even while this was being built (1793-1800), an Act of Parliament in 1795, allowed the construction of a branch from it direct to Paddington, on the outskirts of London itself. A new brickworks at Alperton, using suitable clay from a local field, provided bricks for some of the bridges required, and the branch canal opened to the Paddington Basin in 1801. 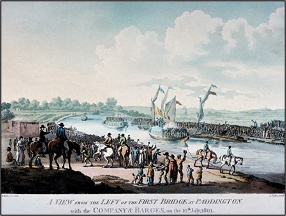 4. The opening of the canal branch to Paddington Basin, 1801. (Image from the London Metropolitan Archive)

Canals need to be topped up with water, and this was especially the case after the canal company started supplying piped water (pumped straight from the Basin!) to homes in the rapidly developing Paddington suburb. The River Brent was soon identified as a likely source, and although a reservoir was considered, the cheaper option of a “feeder” was constructed in 1810/11. This ran from a bend in the river at Kingsbury, through the parish of Willesden, to the canal at Lower Place. You can see its course on a map from that time, and it is still there today. 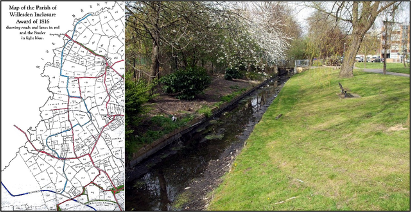 Water supply again became a problem when the Regent’s Canal was opened in 1820, joining the Grand Junction branch at what is now known as Little Venice. A drought in 1833 gave the final push to plans for a 61-acre reservoir at Kingsbury, and by late 1834 the canal company had accepted a tender from William Hoof, to build the dam and associated works for the sum of £2,747 (and six shillings!). 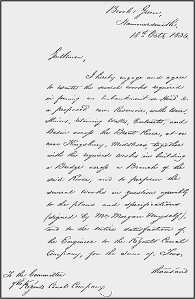 6. Hoof's letter to the Regent's Canal Co. of October 1834, agreeing terms for constructing the reservoir.

Work on the reservoir’s construction must have been carried out quickly, because a plaque inside Old St Andrew’s Church, Kingsbury, records the deaths of four Sidebottom brothers ‘who were drowned in the reservoir near this church on the 14th of August 1835’. The inquest found that Alexander, William and Edward accidentally drowned while bathing, and that Charles died ‘while attempting to save the lives of his three brothers’ - a tragic start to the reservoir’s story. 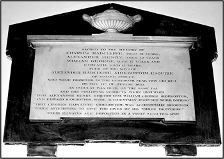 Even before the original work was finished, the canal company was buying more land, so that the dam could be raised and the reservoir extended. Their haste was to have severe consequences. The winter of 1840/41 was so cold that the ground was frozen to a depth of 20-30cm. The six days from 10 to 15 January saw heavy snow and rain, and water was seen overflowing the reservoir’s dam via a “waste weir”. On 16 January there was a rapid thaw, and at around midnight a fracture occurred in the dam wall.

There was already some flooding at Brentford, where the Grand Junction Canal and River Brent met the Thames, but just before 4am on Sunday 17 January 1841 ‘a great body of water’ hit the town, lifting boats out of the canal, which then caused damage to other boats and property as they were flung about by the flood. Three men died, and around twenty barges and their cargos were destroyed or seriously damaged. 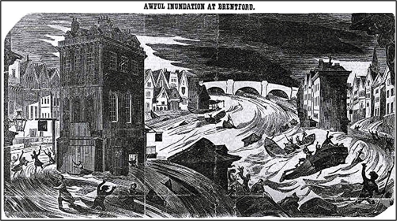 8. A February 1841 newspaper illustration, depicting the flood at Brentford (with some artistic licence!).

Records of the inquest on William Spruce, a 19-year old “barge boy”, show the lengths the coroner went to in order to establish the cause of the flood, and reason for his death. A surveyor representing the Regent’s Canal Company said that the Kingsbury dam ‘was of a proper strength’, and claimed that the water which escaped because of the fracture would not have reached Brentford before 5am, so could not have been responsible. The jurors decided that it was flood water from the reservoir that caused Spruce’s death. The canal company’s directors ordered urgent strengthening of the dam, but continued to resist any claims for compensation! 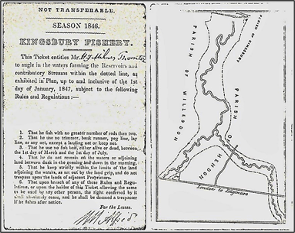 The rebuilding of the dam was completed by early 1843, and a cottage was built near the Kingsbury end of it for a keeper. He would control the flow of any excess water from the reservoir, using sluice gates above the new waste weir, reached along a wooden walkway above the dam. After this, the Brent or Kingsbury Reservoir (both names appear to have been used) settled down to a few quiet years, when fishing and birdwatching were enjoyed there. 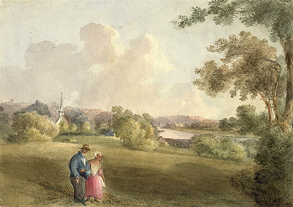 Water supply for both the Regent’s Canal from the docks at Limehouse, and the branch through Alperton and Willesden, soon became a problem again. In 1851, Parliament passed an Act allowing them to increase the height of the dam and create a much larger reservoir. More land was purchased, including a public house just north of the Brent Bridge on the Edgware Road. Its tenant was removed, and an embankment had to be built, to protect the pub from flooding. 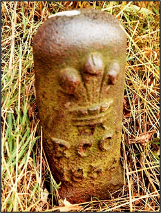 11. A Regent's Canal Company boundary post from 1854, near the reservoir. (Photo by the late Len Snow)

New boundary posts (bearing the Prince of Wales crest of the former Prince Regent, later King George IV) were put in place around the company’s land, and by 1854 the reservoir had been filled to cover around 400 acres. As the former meadows became flooded, and the habitat changed, the bird life around the reservoir was studied by two keen naturalists living in Kingsbury, Frederick Bond and James Harting. The latter’s 1866 book, “Birds of Middlesex” has a wonderful frontispiece showing the reservoir. 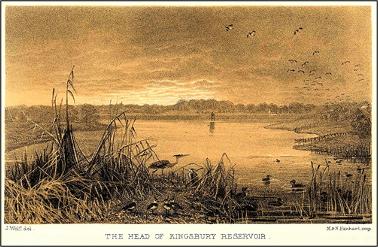 12. The frontispiece to Harting's 1866 book "Birds of Middlesex". (From an original copy at Brent Archives)

Around 1858, a new tenant took over the public house near Brent Bridge, and we will look at his part in the reservoir’s story next weekend. I hope you will join me then.