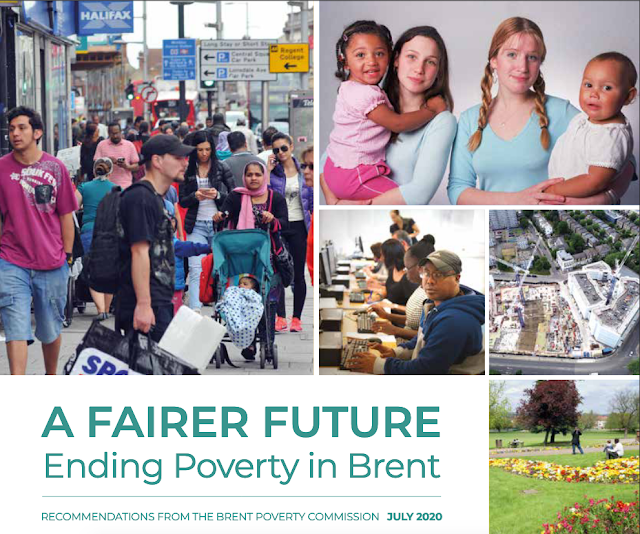 Today (Monday 17 August), Brent’s Poverty Commission delivered its findings, following a six-month review into poverty in the London borough. It points out 1 in 6 households (17%) live below the poverty line, doubling (to 33%) after housing costs are taken into account. More than 1 in 5 (22%) of children live in poverty, doubling to a startling 43% after housing costs.

The report draws on evidence from residents, politicians and expert local and national organisations and presents powerful first-hand experiences, bringing home what it means to live in poverty in Brent.

The Commission found that the borough’s proximity to wealth and the skilled employment offered by central London has driven housing costs up without raising pay locally, creating an affordability gap which pushes people into poverty and is a key cause of homelessness. It points to an acute shortage of social housing which has forced people into the private rented sector where rents are two or even three times higher.

To address this, the Commission recommends Brent Council builds on its ambitious plans to generate more affordable homes, using its borrowing powers to build, working with housing associations and taking advantage of post-COVID opportunities to buy from developers and landlords who are exiting the market. It also urges the council to launch an in-depth review into the private rented sector, and enforce decent standards, not least to reduce fuel poverty and health problems caused by poor conditions.

Keeping the sharks at bay

With the second highest number of furloughed workers in London and high rates of in-work poverty due to low pay, the Commission highlights the importance of active labour market policies in the wake of COVID-19 to support job creation and improve local earnings.
Recommendations include using the council’s local influence and procurement powers to secure more quality apprenticeships and specialist skills training, as well as to encourage more small and medium-sized employers to pay the London Living Wage. In particular, prioritising activities to raise the aspirations of young people in the borough.

To break cycles of debt that COVID-19 is likely to exacerbate, the Commission encourages the council to take forward work recently started with credit unions to provide low-cost loans to cut down dependence on unscrupulous lenders.

Our report makes recommendations to ease poverty in Brent by raising incomes. It also shows that poverty is driven by high costs, specifically of private sector housing rents, that lead to more than 2 out of 5 children living in poverty. We call for urgent action to generate the social housing that can address this problem.

Because the causes of poverty are so complex, too often policy makers reach for sticking plasters. We wanted to understand how this web of problems, from wages to housing, debt and opportunity, come together to harm people’s quality of life in Brent.

I am extremely grateful to Lord Best for leading this Commission. We will offer a full response in the coming weeks, but I’m optimistic that this marks a new chapter in how we address poverty in Brent.