Guest blog by Chris Coates of Preston Community Library. Plenty of material here, especially the video,  for local teachers who are teaching the Second World War to Year 6 next academic year.

Part 2 of The Preston Story ended in the early years of the 20th century with Preston still a rural hamlet. Its small population were employed on farms or as servants in the large houses starting to appear along Preston Road – their middle-class residents now able to commute into London from the ‘request stop’ Halt on the Metropolitan Railway. At weekends, the population was swelled by visitors to the two golf clubs, the shooting grounds and the various sports grounds owned by London-based companies. 1.A 1930s postcard of Preston Hill, with bridge over the Wealdstone Brook in the distance.
(From the Wembley History Society Collection – Brent Archives online image 8979)

The years following the First World War brought fast moving change to Preston. Local farms had specialised in producing hay for the 1000s of horses in London - Uxendon and Forty Farms were 100% meadow land in 1900. As motor traffic increased the demand fell, so some farms closed while others down-sized. In 1907, there were 66 farms in Wembley and by 1937 there were only nine. 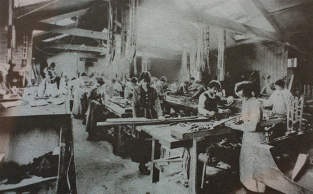 At the same time, new industrial areas near Preston attracted workers away from agriculture and, during the war, women were encouraged to leave domestic service for better paid, though often dangerous, work in factories. In Kingsbury, there were 4 aeroplane companies including The Aircraft Manufacturing Company, which by 1918 was employing 4,400 people, more than half of them women. Another company, Hooper & Co, moved to East Lane, North Wembley in 1917 to build the Sopwith Camel and produce spare parts for other planes. The site – later the GEC estate – covered 40 acres including a flying ground and railway sidings. British Oxygen also moved to East Lane in 1918, as did the Wrigley [chewing gum] Company in 1926.

From 1921, Christ Church College, Oxford, Harrow School and other landowners sold their Preston estates for building development. Developers were attracted by the good transport links both into London and to the North. Local roads, including Forty Lane, had been widened and improved to ease visitor access to the 1924-5 British Empire Exhibition and the train network had been extended and modernised. The Metropolitan Line was electrified through to Harrow by 1908 and the Bakerloo Line, running on L. & N.W.R tracks, electrified out to Watford Junction by 1922. A large triangle of land was created between the lines where commuters might find the Metroland dream of a modern home in beautiful countryside plus a fast rail service into London.

3.The cover of the 1921 edition of the Metro-Land guide. (Image from the internet)


The term "Metro-land" was coined by the Metropolitan Railway Company’s marketing department in 1915 to promote sales of housing on its land in the North-west London suburbs. The Company did not build housing in Preston, but other developers were clearly influenced by the Metroland ideal of Tudor Revival design. Sadly, John Betjeman gives only a passing [literally!] reference to Preston in his many Metroland poems: 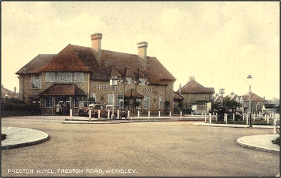 Housing and shops spread along Preston Road in the 1920s. Several builders were involved in the development, notably Clifford Sabey who built the Preston Hotel (now The Preston) c.1927 and Preston Park Primary School in 1932. The lovely Harrow Golf Clubhouse, that we saw in Part 2, overlooking peaceful fields and the meandering Crouch Brook, was demolished in 1928 and the Preston Park Estate began to cover the whole golf course and fields beyond up to the Bakerloo Line boundary, taking some 12 years to be completed. 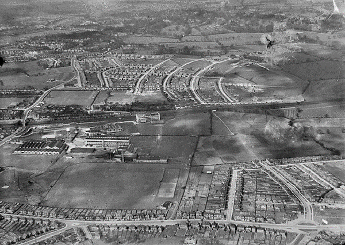 This aerial photograph, taken in 1932, looks west across the growing Preston Park Estate. Logan Road, Carlton Avenue East, College Road and Preston Road down to St Augustine’s Avenue can clearly be seen, with the Crouch Brook crossing Glendale Gardens, the school grounds and the fields beyond. Sudbury Court Estate in the distance is nearing completion.

6.Exterior and interior views of The Windermere, built 1938. (Images from the internet)

Some developers included outstanding designs. The Lawns Court estate on The Avenue, was built in the Moderne style on the old Forty Farm estate around 1931.  The Windermere, a Grade 2 listed pub in Windermere Avenue, was built in 1938 in the Dutch style, with Art Deco interiors. To enhance the attraction of the area for commuters, the old Halt was replaced with a proper Preston Road station, built to the west of the road bridge in 1931-2, and a new station, South Kenton, on the Bakerloo Line, was opened in 1933. 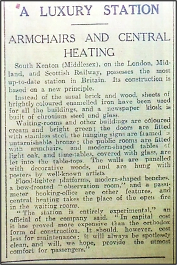 7.A newspaper article about South Kenton Station, from the Nottingham Evening Post, 1 February 1934

By now it was clear that the new heart of Preston would be to the south of the old hamlet. More shops appeared around the station in the 1930s and by 1936 Preston was being described as ‘a high class and rapidly growing residential area with a population of between 6,000 and 7,000 people’. Under Wembley's Town Planning Scheme 1931-2, the remaining country lanes in the area were improved and Clay Lane re-named Preston Hill - both it and Preston Road became straightened and widened suburban streets by 1937. Preston Manor Secondary School was built in 1938 for the families moving into the area. 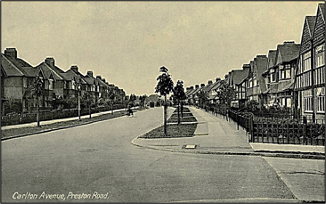 
Development moved north-east of Preston when the Metropolitan Railway extension from Wembley to Stanmore (later the Bakerloo and today the Jubilee Line) was opened in 1932. The final remnants of the old Uxendon Manor estate that we looked at in Parts 1 and 2 were demolished to make way for it. Forty Green began being built over as early as 1923, but in the years that followed housing covered the whole of Uxendon, except for Barn Hill Open Space, which had been purchased by the Council from the owners of Preston Farm in 1927.


The demand for building workers far outstripped local availability. As in previous times, migrant or incoming labour was vital. Government schemes brought unemployed workers from ‘Distressed Areas’ in the North to meet the inter-war development boom in the South East. My father came down from Durham on such a Scheme and was put to navvying on building sites in Kingsbury. After finding work more suited to his skills, he, like many generations of migrant workers before him, settled in the area. 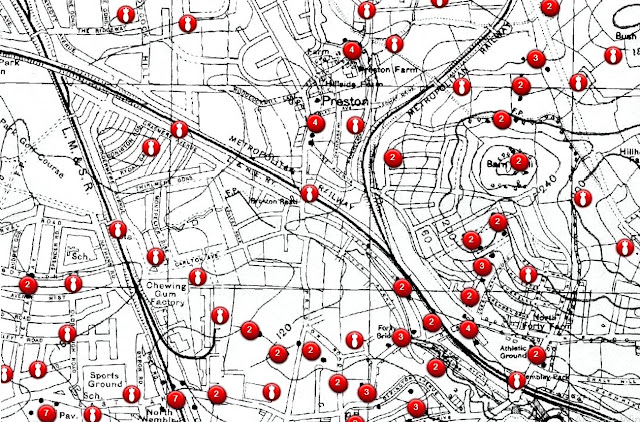 The Second World War came to Preston in August 1940, when incendiary bombs were dropped on Barn Hill. Later in the Blitz, the area was hit more severely. This bombing map from the 1940s shows 43 High Explosive Bombs dropped from October 1940 to June 1941 in Preston, probably aiming for the rail networks or for North Wembley’s industrial complex - especially the GEC Research Centre where radar systems were being developed.

The A.R.P. [Air Raid Precautions] Post above was in The Avenue, Wembley Park. The wardens’ name-sign for their base shows a rattle, to warn residents of a possible gas attack, and a bell to signal the ‘all clear’ afterwards. A.R.P. wardens also enforced the ‘blackout’. Heavy curtains and shutters were required on all private residences and commercial premises to prevent light escaping and helping enemy bombers locate their targets.

At the start of the war, Government evacuation schemes moved children out of the cities. In 1940, the City of Benares, an evacuee ship on its way to Canada, was torpedoed by a German submarine with heavy loss of life, including 77 evacuated children. Many Wembley children were on the Benares and 7 pupils from Preston Park Primary School were among those who died. Further plans to relocate British children abroad were cancelled. 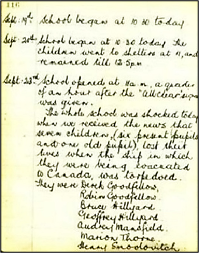 British Restaurants were set up for those made homeless, but later became open to all, serving meals each day at 1 shilling for 3 courses. There were 8 British Restaurants in Wembley, including Preston [1943] at 3-7 Lincoln Parade, Preston Road - the building survives at the junction with Carlton Avenue East.


Everyone on the Home Front was expected to contribute in some way – in war work, ARP, the Home Guard or the War Savings Campaign. Elmstead Avenue’s War Savings Group managed to collect £40,000 for the war effort through its activities. Children were encouraged to help collect recycling. There is a short silent film of Kenton Boy Scouts doing just that in Woodcock Hill!

Families with space were expected to accept billeted essential workers, Land Army women working on the remaining Preston farms, or refugees. Wembley’s Empire Pool acted as the Middlesex Reception Centre for European refugees and many were found temporary homes locally. The Church of the Ascension church hall [built 1937] in The Avenue set up a refugee club. The Church itself was not built until 1957. 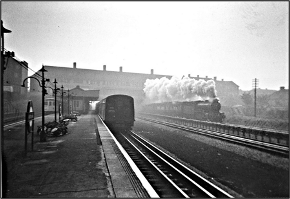 13.Metropolitan trains come and go at Preston Road Station, while a steam train races past on the British Rail tracks. (Photograph taken by a trainspotter in October 1962 – Brent Archives online image 8654)

After the war, a prefab estate was built for bombed-out families at Tenterden Close, Woodcock Hill, and was there until the late 1960s. Housing development continued to the north and east of Preston Road, and The Mall was extended to the Wealdstone Brook, cutting across playing fields to make a more direct route from Preston Hill to Kingsbury.  In 1947 another place of worship, a Liberal synagogue, was built on Preston Road. By 1951 Preston's population had risen to 12,408. The company owned sports fields on Woodcock Hill were bought by Middlesex County Council for Wembley in 1957 and renamed the John Billam Sports Ground after a previous Mayor. 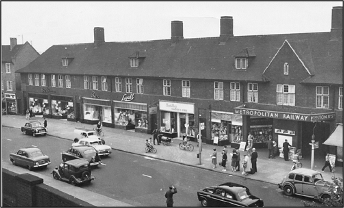 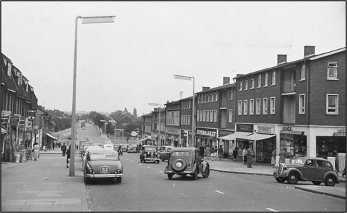 
By the early 1960s, all of Preston's old buildings in the original hamlet had been lost. Preston Farm, Hillside Farm and the Preston Tea Gardens demolished for flats and John Lyon’s farm replaced by John Perrin Place – a council housing estate. After hundreds of years with little change, within 50 years the tiny village of Preston had become a radically different place – and very much part of London.

If you have memories of Preston in the Second World War or the years following, please share them in the Comments box below. Do return for Part 4 of the Preston Story when we will look at our area today.