Guest post: Our borough has been hit hard by the racist and classist algorithm used by Ofqual to decide students' grades 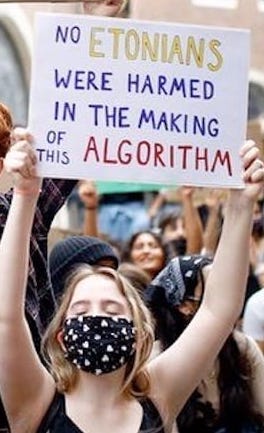 Just before the Government's screeching, rubber-burning U-turn on A Level results ,Macsen Brown, Brent Green Party Youth Officer and a Brent A Level student sent me this Guest Post:

Results Day in Brent has brought with it a wave of anger and despair similar to that seen across Britain. As an area with particularly high numbers of working-class communities and People of Colour - our borough has been hit hard by the racist and classist algorithm used by Ofqual to decide students' grades. Beyond that we've seen a delay in BTEC results that will impact students wanting to start or resume their courses in the next academic year, universities who are refusing to honour the offers they made to students appealing their grades and to top it all off - cheaper travel for school students in London is in danger of getting cut.

At every face of this issue, the young people of Brent will be amongst those hit hardest by the incompetence and prejudice of the Conservative government. We're more likely to be downgraded, we'll need to pay more if the Zip Card is abolished, and our schools remain fatally underfunded.


This results fiasco has been a toxic combination of the war this government is waging on the public sector and the ideological drive to inject artificial competition into places where it wouldn't naturally be found. Education is a clear example of how the state seeks to create competition to enforce a mean and reactionary vision of society down our throats. By forcing us to comply with rankings, league tables, percentages and ridiculous, manufactured bell curves the Government creates inequality and hierarchy where they simply do not belong. Exams are not a sign of any sort of personal worth, but rather how well an individual takes a test relative to their peers.


This is undeniably a competition, and in my view stands against the spirit of education and learning.
HERE