Two weeks ago, we celebrated the 1908 Olympic marathon race on its 112th anniversary, with a video including newsreel film of the two leading runners, with a crowd in Wembley High Road watching them. 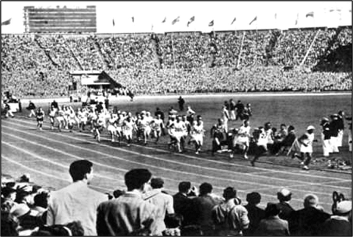 The Olympic marathon runners on a circuit of the track, before leaving Wembley Stadium, 7 August 1948.

When I wrote to Joe Neanor, who had made the video, he said that he had also recently run the 1948 Olympic Marathon race route – and he supplied a link to a colour film of the race, which took place 72 years ago today. That race started and finished in Wembley Stadium, and went out and back along Forty Lane, Fryent Way and Honeypot Lane to Stanmore, with a loop through the countryside of Hertfordshire. It was a tough course, with plenty of hills to climb! 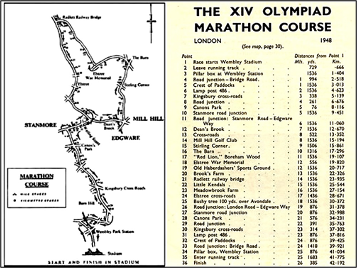 The 1948 Olympic marathon course map and details. (Images from the internet)

If you watch the video below, it will take you back in time, and you will spot scenes you recognise, as they were in 1948, including Olympic Way and the Town Hall. As the runners head back towards Wembley, there are some key moments in the race, along Fryent Way with what are now the fields of Fryent Country Park in the background. And the finish in the stadium is almost as dramatic as that in the 1908 Olympic marathon!

As you can see the International Olympic Committee has banned live viewing of the video on Wembley Matters but you can view it on You Tube by clicking on the embedded link or use this LINK.