The second part of a series of four by Chris Coates

We left the end of Part 1 of the Preston Story in the 18th century, with the landscape scarcely changing over the previous 500 years. In the early 19th century, the population grew slowly – in Preston and Uxendon together there were 64 people in 1831 and 105 in 1841. Preston was still very much a rural area, but not a contented one. 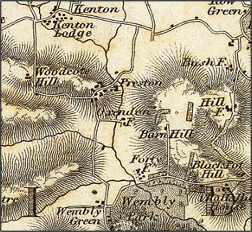 Preston and its surrounding area, 1832. (Extract from the Environs of London Map, 1832)

The agricultural depression after the Napoleonic Wars caused problems for both farmers and their labourers. Following the Enclosure Acts 1803 and 1823, the continuing fencing off of common land by large landowners caused problems for tenant farmers. An ‘Anti-Inclosure Association’ distributed manifestos throughout Harrow Parish and there was a petition to Parliament in 1802 and fence breaking incidents locally in 1810. In 1828, when there was a further outbreak of violence in the area, Harrow’s only fire engine and six crew were called into action at Uxendon as desperate workers burnt haystacks and threatened local landowners.

Unrest continued and in 1830 local workers were active in the Swing Riots, a widespread protest across South East England, which used arson and machine breaking against the increasing use of agricultural machinery and the subsequent unemployment and lower wages. The Uxbridge yeomanry cavalry and the militia were mobilized to shield London when rioting spread to the Harrow area at the end of November 1830. 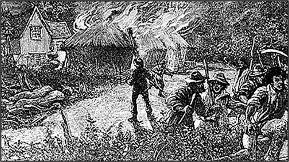 Tenant farmers called for a reduction in rents. Lord Northwick, who held the manor of Harrow with land bordering Preston, accused local farmer Thomas Trollope, the novelist’s father, of conspiracy and had his crops seized. Anthony Trollope described Lord Northwick as 'a cormorant who was eating us up'. Northwick received a threatening ‘Swing Letter’ demanding a reduction of rent and warning that “our emisaris shall and will do their work - you have ground the labouring man too long”. The 1834 Report of the Poor Law Commissioners showed wages of agricultural labourers in Harrow district to be around 10/- per week or £26 per annum “supposing work is available all year round - which for most it is not “.

Despite poor wages, the area continued to attract migrant labour. In 1841, there were 415 migrant haymakers, mainly from Ireland, living in barns and sheds in Harrow. The 1851 census clerk for Preston and Uxendon notes these conditions for in-house migrant workers: “All persons entered as lodgers are those only who occupy generally part of a bed, at the usual charge of 1/6 per week, including washing and attendance, with a seat by the evening fire”. Some seasonal workers settled down in Preston. In 1851, the Irish family occupying Forty Farm cottage had a child born there, and there are Irish and West Country domestic servants elsewhere. 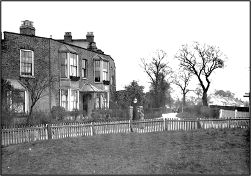