Mutual Aid network in Kilburn comes to the aid of a tree scheduled for removal - and saves it!

Local councils removing trees agains the wishes of residents is a hot button issue. Sheffield has doubtlessly been the worst example of this  LINK  but here in Brent plans to remove trees saw produced a well organised and eloquent defence of mature trees and opposition to their removal in Furness Road. The result was a commitment from the council to fashion a new approach with removal being a last resort LINK .

So when notices appeared last Friday (24th) on trees at either end of Algernon Road, Kilburn, warning that one was scheduled for removal the following Monday, it became a small scale test of this new policy. The good news is that thanks to local residents quickly raising the alarm, along with fast responses from local Brent councillors and officers alike, the decision has been reversed and the tree saved. How it happened is at least as important as the fact that it did happen.


Like many other areas, Kilburn has set up a number of mutual aid groups, at both ward and hyper local street level. While the intention was to support neighbours in need during the lockdown to counter the Covid pandemic, it has of necessity meant that people not necessarily in direct contact with one another before now have the ability to communicate quickly when issues come up.
This is exactly what happened in this case. WhatsApp messages and tweets went out on Friday evening. Emails were sent to local councillors and officers that evening and over the weekend, protesting that the tree was not "dead” as the signs claimed. One councillor, Faduma Hassan, asked for her email address to be circulated so that residents could contact her and she could show the strength of opposition to the plans and contacted the lead member for environment. Others contacted residents in nearby streets - put in touch via the street level groups - who had some experience of dealing with the council over tree preservation.
Monday morning rolled around and when one of the residents went to talk to the contractors who had arrived, they discovered that the council had indeed changed the work order. The trees at one end were to be pruned and a stay of execution of two weeks place on the tree scheduled for removal. Further good news came the following day, with an email from the council tree officer. Gary Rimmer said they now thought that the tree could be saved and would be pollarded, not removed. He included a welcome apology for the lack of notice too.
So this was a great result, with Brent being pushed to re-examine their plans and change them, in less than 48 hours.
It would not have happened but for the ability to circulate information so fast, without excellent and timely responses from Councillor Hassan and Gary Rimmer, taking residents concerns seriously - and perhaps being aware of the pressure from previous incidents, thank you Furness Road campaigners and Harlesden Area Action for acting so fast back in November 2019. It’s also worth noting that in that instance too, the local councillor, Jumbo Chan was quick to back residents concerns LINK .
There are two concerns remaining, however. A new housing development, at the other end of Algernon Road is nearing completion. These photos show how many trees were removed to make way for it: 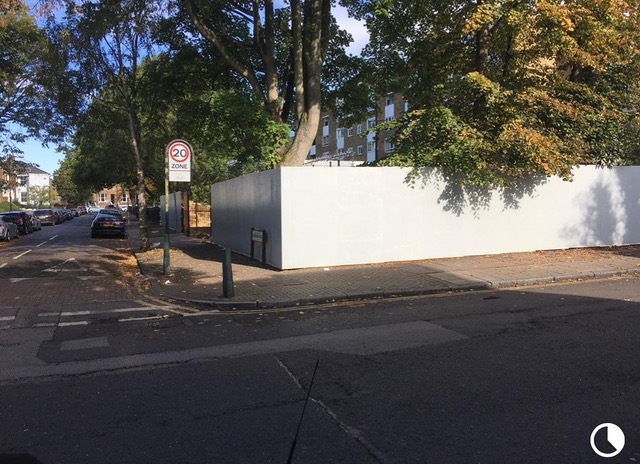 When the building is completed, Brent needs to be held to its commitment to replace the lost trees with ones on the same spot or, in this case, nearby. Brent needs to acknowledge that replacing a mature tree, wide canopy and all, with a young sapling, is not really replacing anything at all. See LINK .
Brent declared, rightly, a climate emergency. We need to make sure their actions on this are as serious as their warm words. It may well be that local mutual aid groups, set up to support isolated neighbours needing shopping and having prescriptions filled have a longer term role in the maintenance of local democracy, too.

Thank you for this excellent guest blog.

It underlines the importance of residents working together, and with their local councillors and Council officers, to make local democracy work.

Our elected councillors are meant to represent the views of people in their Wards to the Officers and Cabinet members who have the power to make decisions that affect our lives.

If that connection breaks down, or if those in power ignore the messages coming up to them from residents (who are both Council Tax payers and voters), it damages trust, and the Council is seen to be out of touch, and not to care about the people whose interests it is meant to serve.

Algernon Road is a good example of how this can work in practice (although how the tree was wrongly "condemned" in the first place does raise concerns).