Welcome back to this look at the history of our local reservoir. If you missed Part 1, you will find it here (just “click” on the link).

1. The Old Welch Harp coaching inn, in a 19th century painting. (From Geoffrey Hewlett’s collection)
In the 1850s, the reservoir had been expanded, so that it covered around 400 acres. An embankment had been raised, to protect a public house from flooding. The Welsh (or Welch) Harp tavern had been built in 1736, just north of the Brent Bridge. It served as a coaching inn beside the Edgware Road, one of the main routes north-west from London, which followed the line of a Roman Road, known by Saxon times as Watling Street.

In 1858, William Perkins Warner became the landlord of the tavern. He had spent his childhood at Blackbird Farm in Kingsbury, before going to train as a butcher in London. During the Crimean War of 1854-56, he worked for the governments’ Commissariat Department, a uniformed civilian force that supplied food to the army. On his return, he married the daughter of a Kilburn builder, and at the age of 26 he began a business that would make the Welsh Harp name famous. 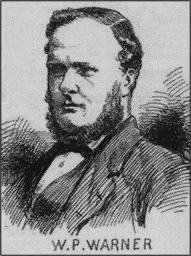 2. A drawing of William Perkins Warner. (From the collection of the late Geoffrey Hewlett)

A horse bus service from London to Edgware had started in 1856. Warner realised that this could bring him many extra customers, as long as he provided attractions that would make it worth their while. He rebuilt the tavern, adding a large dining room that would also stage music hall entertainment. He also leased adjoining fields, to provide gardens and sports facilities, and acquired the rights to use the reservoir for fishing and boating. 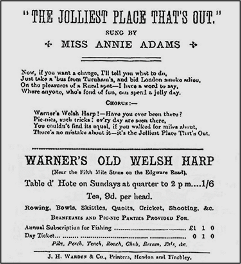 3. Parts of Warner’s song sheet for "The Jolliest Place That's Out". (From Geoffrey Hewlett’s collection)

One of the top music hall singers at this time was Annie Adams. Around 1864, Warner had new words written to one of her most popular songs, “The Merriest Girl That’s Out”. After she had performed it at his venue, printed lyrics of “The Jolliest Place That’s Out” were circulated, with an advertisement for the attractions of Warner’s Welsh Harp at the foot of the page. People knew the tune, and would be singing the chorus as they went about their daily lives! 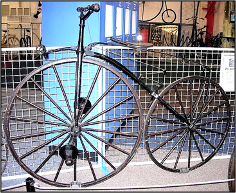 As well as the regular sporting attractions of the tavern’s grounds and reservoir, Warner staged special events to bring in larger crowds of customers. Whit Monday, the day after the Christian festival celebrating Pentecost, was often taken as a public holiday, even before this was officially recognised in the Bank Holidays Act of 1871. In 1868, Warner organised England’s first ever bicycle race at the Welsh Harp, and presented a silver cup to the winner, Arthur Markham. He was riding a “velocipede”, made in Paris by the Michaux brothers. Today, the world’s most famous cycle race is the Tour de France, and that country can claim to be the home of cycle racing, although its first bicycle race was held just one day before Warner’s! 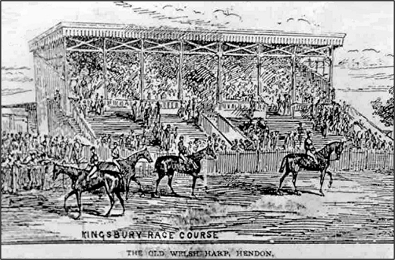 5. Crowds at Warner's Kingsbury race course in the 1870s. 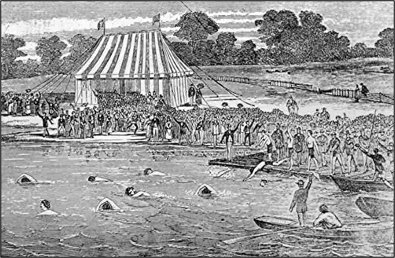 6. A swimming gala in progress at the Welsh Harp, c.1870.
(Both of these images, from Geoffrey Hewlett’s collection, are probably from “The Illustrated London News”)

Warner brought racing on a larger scale to the Welsh Harp in 1870, with the opening of his Kingsbury race course. His Spring steeplechase meeting, with a course that went across the fields of Kingsbury as far as Preston, was famous in its day, but the Racecourses Licencing Act of 1879, banning horse racing within ten miles of the capital, put a stop to this venture. The summer of 1870 also saw the first of the Welsh Harp’s swimming galas in the reservoir. 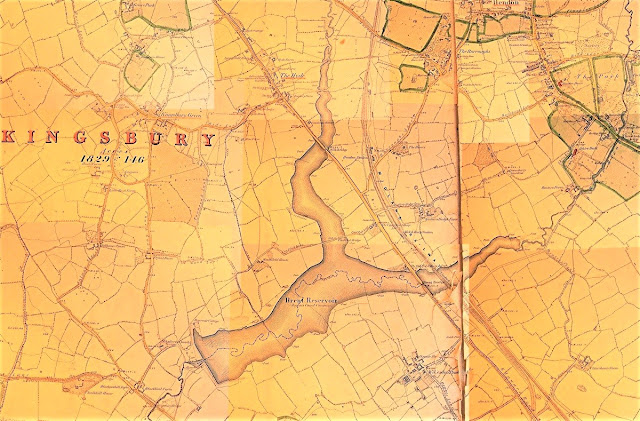 This extract from an Ordnance Survey map shows the Brent Reservoir as it was in 1873. You can see that its waters stretched east and north well beyond the Edgware Road. To give you an idea from the area today, part of the Brent Cross Shopping Centre and most of the Sainsbury’s superstore at West Hendon would have been under water. The map also shows the Midland Railway line, which opened in 1869/70, crossing the reservoir on a viaduct.

Warner was quick to see that the railway could bring many more people to events at his pleasure grounds. The trip from Hendon Station might put some people off, so he persuaded the railway company to build a Welsh Harp Station, which opened in 1873, just two minutes walk from the tavern. This was to their mutual benefit, with the Midland Railway running special trains on Bank Holidays to bring thousands of Londoners to the attractions that Warner staged.

A succession of very cold winters from 1879 onwards saw the reservoir freeze over, sometimes for a number of weeks. Warner, never one to miss an opportunity, was soon advertising public skating on the Welsh Harp. He also brought down professional speed-skaters from the Fens, for one-mile races that drew large crowds of spectators. The Warner Cup, in January 1880, was won by the English champion, George “Fish” Smart. With milder winters now, even if the surface freezes, please don’t venture onto the reservoir – you would be “skating on thin ice”!

9. A newspaper advert for skating at the Welsh Harp, and "Fish" Smart winning the Warner Cup race. 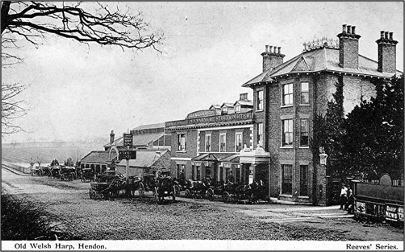 William Warner died at the Old Welsh Harp in 1889, aged just 56. You can see in the photograph above, taken in the 1880s and used in a later postcard, what the public house he took over thirty years earlier had developed into under his management. His widow carried on their business for another ten years until the lease ran out, assisted by William’s brother, John. As well as the many sporting and entertainment facilities that the tavern and its grounds offered, they continued to put on special attractions, such as a parachute descent from a balloon by the fearless Miss de Voy of London in 1890.

Her gas-filled (from the mains!) balloon took off from the tavern’s grounds, watched by a large crowd. It disappeared into the clouds, and several minutes later Miss de Voy’s parachute was spotted. Unfortunately, she was blown off-course, and the crowd following her along the bank saw her land in the water, near the Cool Oak Lane bridge. A local newspaper report says that W. Leicester, a youth from Willesden, threw off his hat and coat, and dived into the water to save the brave aeronaut, but she was rescued by boat before he could come to her aid. 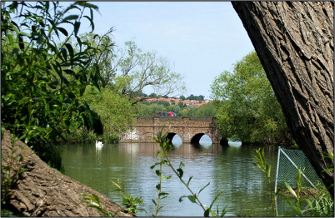 Even while the Old Welsh Harp was in its heyday, things were beginning to change around the reservoir. About 200 terraced houses were built in West Hendon in the 1880s, on new streets stretching down from the Edgware Road towards the water’s edge. But other parts of the surrounding land remained as rural countryside, where people could enjoy country walks on a Saturday or Sunday, if they were not making use of the livelier attractions on offer at the tavern. 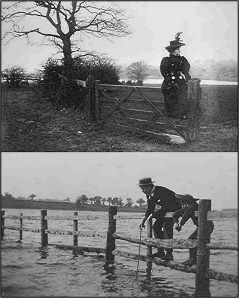 12. Two photographs taken during a family's Sunday afternoon walk by the Welsh Harp in 1897.
(From the collection of the late Geoffrey Hewlett, copies donated to him from a Kingsbury family’s photo album)

The popularity of the Old Welsh Harp declined after Mrs Warner left, and the Midland Railway closed its station in 1903. There were other attractions that Londoners could enjoy, including the ambitious, but short-lived, pleasure grounds at Wembley Park. For his zeal in putting on sports and entertainment that brought in the crowds, W.P. Warner could be compared with Arthur Elvin, and his efforts to promote Wembley from the late 1920s onwards. More than fifty years before Elvin used greyhound racing as a way to save Wembley Stadium, Warner had staged England’s first greyhound race using a straight track and a mechanical hare, at the Welsh Harp in 1876. Unlike most of his ventures, that one ended in failure. 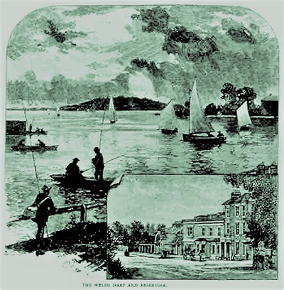 13. The reservoir and the Welsh Harp, in an 1898 illustration. (From Geoffrey Hewlett’s collection)

William Perkins Warner has been largely forgotten, but he has left a lasting legacy. Although its official name is the Brent Reservoir, because of his efforts most people know this stretch of water as the Welsh Harp. Its story will continue into the twentieth century, next weekend. Don’t miss it!