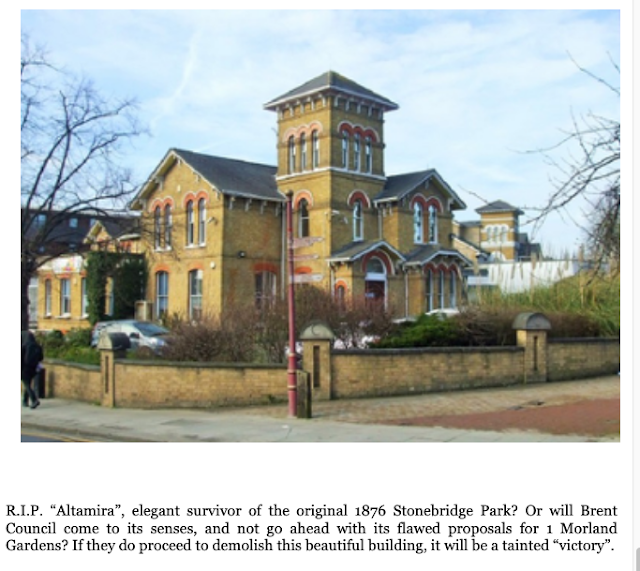 
In 1955 the then Wembley Borough Council demolished the Barham Mansion within the grounds of Barham Park which had been the home to first the Copland sisters, and later General Crawford-Copland, and ultimately the Barham family, including Titus Barham.

The Coplands and Titus Barham were major benefactors to various projects and activities within the Wembley area including Wembley Hospital, St John's Church, etc etc.

The old Mansion had been used during the war and due to lack of money was neglected and in poor state of repair. Its loss is felt to this day.

Brent Council has clear policies about preserving its ever diminishing heritage assets. The old Willesden Library building was preserved on two occasions despite it being in the way of new developments.

The Villa at 1 Morland Gardens is clearly unique and will represent a massive loss of heritage buildings in Brent. The decision is both odd and also clearly in breach of the Council's own policy developed only a few years ago. What is the point of a heritage policy at all when it is ignored in a case like this.

As you know I have been critical of the planning process in Brent. Planning officers with little connection or history with Brent have far too much power and influence and Councillors are bullied into making decisions with threats of possible appeals. Officers move on no doubt claiming on their CV the achievements of getting decisions through - however damaging those decisions may be to our local area.

In this case the failure to properly follow the Council's heritage policy means that the decision should be suspended and reviewed. We simply cannot allow the destruction of the Brent's heritage in this way.

I recall walking the desolation of this area in Stonebridge in the early 1970s when all the terraced houses had been demolished and replaced by the unsuitable Bison Wallframe buildings. The Villa survived that onslaught only to face demolition now when we claim that we have learned of the failed policies of 'slum' clearance.

We should not make the same mistake and we should not allow for another important of Brent's heritage building assets to be lost.

I trust that you will instigate an investigation and review before it is too late.

Altamira is a beautiful historic building, unique in Brent and a great asset to the local area. Knocking the building down goes against Brent's own planning policy, and the promises the Council has made about valuing Brent's heritage. Brent Council must re-think!

Well said! It's a beautiful building that should be kept. Brent Council seems to have a serious problem with the areas older history, which when one uncovers with a little research, reveals a rich tapestry of ancient forests, great estates created by some of Britain's most renowned architects and landscape designers of the time, as well as home to some of the great writers and artists, either living in Brent, or passing through. We should celebrate, or at the least explore our heritage, not hide it away, demolish it out of existence.

Brent council for once do the right thing and preserve some of our heritage which has almost all be destroyed in this borough now.

Demolishing this building would be a great loss to the area, which already consists of a great deal of high-rise buildings. It's so rare to see such lovely architecture in the area as it is so important for residents to be able to see and enjoy the heritage of the area instead of just the new flats, which dominate that road in particular. I sincerely hope the council reconsiders and goes with the plan to incorporate the original building.

Standard procedure in Brent. They demolished Dollis Hill House, despite being Grade 2 Listed. They connived with the new 2010 Conservative/Liberal coalition Govt and Eric Pickles the Environment Secretary signed the death warrant. Disgusting behaviour by all politicians at that time.

Sorry Martin but Dollis Hill House, as you well know, had been reduced to a pile of bricks by numerous cases of arson by 2010. All the insurance proceeds the Council received had been used up to encase it in scaffolding and iron sheeting. The residents group supported financially never came out with a financial viable scheme to fund repairs or future maintenance. Ken Livingstone as Mayor of London promised funding but when it came to the crunch never delivered as he realised that a viable project could not be recreated from a pile of bricks. To raise the wreck of Dollis Hill House as some sort of realistic comparison is nonsense.

Following my email to Carolyn Downs, and the support for it from Paul Lorber, I understand that Brent's new Strategic Director of Regeneration, Alan Lunt, is looking into this matter, and hopes to respond by the end of the week.