We left Part 3 (“click” if you missed it) just after the British Empire Exhibition had closed in 1925. Its site and the buildings on it had cost around £12m (equivalent to over £700m now), but the Liquidator’s attempt to sell them at auction as a single lot was withdrawn, with the highest offer at £350k. It was later bought for just £300k by Jimmy White, a speculator who paid 10% of this “up front”, with the balance payable as the buildings were sold off.

Many of the people who worked at the exhibition had been unemployed ex-servicemen. Arthur Elvin was one of these, working in a cigarette kiosk in 1924. He saved as much of his £4 10s wages as he could, and leased eight kiosks himself when the exhibition reopened in 1925, selling sweets and souvenirs as well. He bought and demolished his first small building on the site in 1926, selling the metal for scrap and rubble as hardcore for road construction. After reinvesting the profits several times, within a year he offered £122,500 for the stadium. 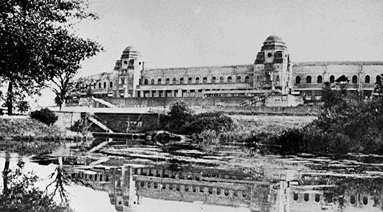 1. Wembley Stadium, after demolition of the BEE pavilions, c.1927. (Image from the internet)

Elvin had paid £12,500 deposit to White, with the balance payable over ten years, when in August 1927 the Official Receiver demanded it all within a fortnight! Jimmy White had only ever paid the initial £30k for the buildings, gambled away the rest, and then shot himself. By working together with friends and banks, Elvin managed to complete the purchase. Aged 28, he was the managing director of the Wembley Stadium and Greyhound Racecourse Company Ltd.

2. Greyhound and speedway racing events at Wembley Stadium. (Images from old books on the stadium)

Few had thought the stadium could be saved from demolition, with the Cup Final as its only annual booking. The company name is a clue to how Elvin believed it could be made profitable. He introduced greyhound racing, three times a week, from 1928, and motorcycle speedway, with his Wembley Lions team, from 1929, both with regular crowds in excess of 60,000. The pre-match entertainment he put on for the football final, including community singing (“Abide with me”), attracted the Rugby League cup final in 1929, with Wembley as its home ever since.

With greyhounds the only winter attraction, Elvin saw another possibility to keep Wembley’s 400 employees in full-time work during the early 1930s depression, after watching an ice hockey game at Earls Court in 1932. His plans crystalized when the second British Empire Games were planned for London in 1934. Working with Sir Owen Williams, who had designed the stadium, the Empire Pool was constructed of reinforced concrete in just nine months. 3. L-R, Duke of Gloucester, Sir Owen Williams and Arthur Elvin at the Pool opening. (From an old book)


The Pool was opened on 25 July 1934, just in time for the swimming and diving events of the Games. The boxing and wrestling competitions followed, in a ring on a bridge across the pool. Then the public could enjoy the pool for swimming throughout the summer. As soon as the speedway season finished in October, its fans could support a new Wembley Lions ice hockey team. The pool was drained for the winter, and the rink on a floor above it could be used for public skating, when the Lions or a second team, the Wembley Monarchs, were not playing. 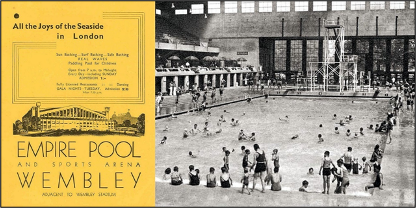 4. A 1934 Empire Pool advert, and swimmers enjoying it. (From a Pool programme, and an old book)

5. Ice hockey programme, and a match at the Empire Pool, both late 1930s. (From old programme and book)


While Arthur Elvin was making Wembley Park a major sporting venue, the exhibition buildings that had not been demolished were put to new uses. The former Lucullus Restaurant, alongside Wembley Park Drive, became a film studio. The huge Palaces of Industry and Engineering were split up into units for manufacturing or warehouses. Elvin used the Palace of Arts as storage space, for the platform which supported the ice rink, and the banked timber track used for cycling races inside the Empire Pool, but it was soon to be required for another purpose.

In the late 1930s, Germany under Adolf Hitler aimed to become a dominant force. The Empire Pool hosted the European Swimming Championships in 1938, and Germany easily topped the medal table. After war broke out the following year, Wembley Council took over the Palace of Arts as the centre for its A.R.P. organisation. When thousands of British troops were evacuated from Dunkirk in May 1940, many were brought to the stadium, which was used as an emergency dispersal centre. Refugees from France, Belgium and Holland followed, and were given temporary accommodation in the Empire Pool, before being rehomed across the country. 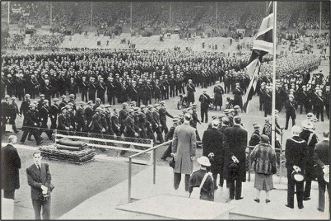 Wartime parades and reviews made use of the stadium, and other events, including greyhound racing, continued throughout the war. Service men and women could attend free. There were many charity matches, like an England v. Scotland football international in February 1944, with King George VI, Princess Elizabeth and Field Marshall Montgomery in the Royal Box, which raised a record £18,000. Others were inter-service games, including baseball and American Football between teams from the U.S. ground and air forces in 1943/44, ahead of D-Day. 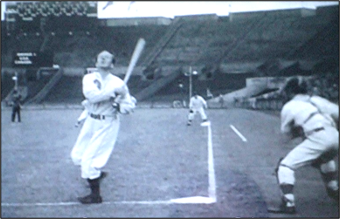 7. A U.S. Services baseball game at Wembley Stadium in 1943. (Still image from a newsreel film)

The stadium was used as a landmark by the Luftwaffe, on their way to raids north of London, but Wembley Park was also a target. A German airman, whose bomber was shot down locally, had a map marking the location of an R.A.F. storage depot (the former Palace of Industry!). Bombs hit the stadium on three occasions, and a V1 “doodlebug” landed on the kennels, killing a number of greyhounds, in 1944. Each Christmas, during the war, Mr and Mrs Elvin and their stadium team provided a free Christmas dinner for hundreds of local service personnel who could not get home. In 1945, Elvin was awarded the M.B.E. for his wartime efforts.

There had been no Olympic Games in 1940 or 1944, and when London was invited to stage the 1948 Olympiad, the Government almost declined the offer because of post-war austerity. Then, at the start of 1947, Elvin offered his facilities at Wembley Park, free of charge, so the Games could go ahead. The Stadium company also agreed to build a new access road from the station. Until early 1948, about one third of the labour on this project was provided by German prisoners of war. The new road, named Olympic Way, cost £120k and opened in July. 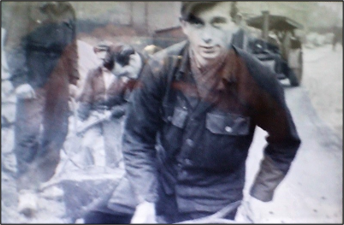 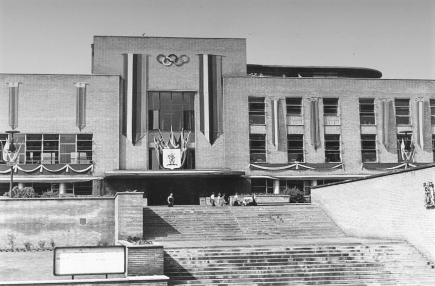 The Borough of Wembley really got behind the Games. Many residents took paying guests into their homes, as there were few hotels for spectators to stay at. Entertainments for visitors were arranged by the Council. A school in Alperton was one of those used to house male competitors, and the families of several pupils played host to some of their female team mates. 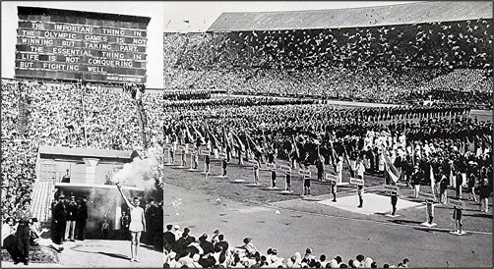 On 29 July 1948, packed crowds watched the opening ceremony. Boy Scouts from Wembley carried the names of the 59 countries taking part, in front of their teams in the parade. Thousands of residents lined the streets, as a relay of local runners carried the Olympic torch on its way to the stadium, ready to light the flame that marked the start of the Games. 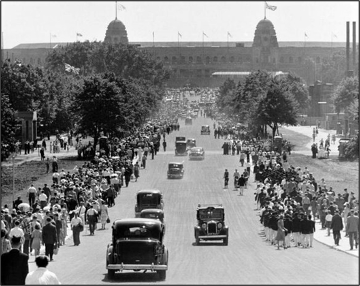 11. Olympic Way, with crowds going to the stadium for the Games, July 1948. (Image from the internet)

For over two weeks, Wembley Park and its new Olympic Way were full of visitors to this great sporting occasion, and they were not disappointed. New heroes emerged, like Emil Zatopek of Czechoslovakia, who won gold in the 10,000 metres and finished second in the 5,000m by just 0.4 of a second, and Arthur Wint, winning Jamaica’s first ever Olympic gold medal in the 400m, after silver in the 800m. Housewife and mother, Fanny Blankers-Koen of The Netherlands was the heroine of the Games, winning four athletics golds.

Elvin, now Sir Arthur, must have enjoyed the event that made “his” venue the centre of the sporting world. As well as the opening and closing ceremonies, the stadium hosted the athletics events, football and hockey finals and the show jumping competition. The Empire Pool staged the swimming and diving, the water polo final, and then, after bridging the pool again, the boxing bouts. Part of the Palace of Engineering was used for the fencing competitions, and the Palace of Arts was taken over by the BBC, to become the Broadcasting Centre for the Games.

Could Wembley Park ever match the “high” of the 1948 Olympic Games again, or would it simply be forgotten as the years moved on? There will be more of its story to discover next weekend, and I look forward to sharing it with you.

Please use the comments section below if you have any questions from the series so far, or if you have information on Wembley Park that you would like to share, with me and others.