Welcome back to this final part of Wembley Park’s story. In Part 5 (“click” if you missed it) we reached the point where Wembley had won the bid to be the home of England’s new football stadium. In 1999, the Football Association bought the old stadium for £103million, through a new company, Wembley National Stadium Ltd.

Even though the plans for the new stadium were still vague, an Australian company, Multiplex, agreed to build it for £326.5m, just before the old stadium’s final match (an England v. Germany international) in October 2000. Many people had thought that Wembley’s iconic “twin towers”, which were Grade II listed buildings, would be retained. However, Brent Council agreed to the whole stadium being demolished, although work did not begin on that until 2002. 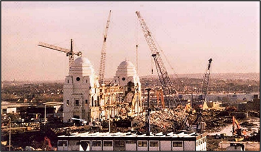 1. Wembley's "twin towers", about to be demolished in January 2003. (Photograph by Pete Tomsett)

Although the old Wembley Stadium estate included over 100 acres of land and buildings, the F.A. had decided that they were ‘not in the business of regeneration’. By 2002, around 85 acres, including Wembley Arena (in 1978, the former Empire Pool was officially renamed), had been sold to the developers, Quintain Estates. They began drawing up a masterplan for the regeneration of Wembley Park, in consultation with Brent Council.

Early in 2003, the world watched as the towers of the old stadium were demolished. Rubble from them was used for part of the foundations of the new Wembley. What I didn’t know, until a few years ago, was that a concrete flagpole base, from the top of one of the “twin towers”, was saved as a memory of the old Wembley. If your “lockdown” exercise walk takes you to Brent River Park, you can see it by the footpath on the east side of the river, near Pitfield Way. 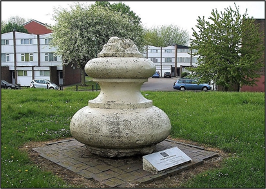 2. The “twin towers” flagpole base, at Brent River Park.

The demolition of the old stadium


While work was underway to build a new stadium on the site of the old, Quintain were also beginning their efforts. The Arena was still a thriving venue for over 150 shows a year, but it too was getting old. By 2005, a £20million upgrade was in progress, and you can see this in the photograph below. The 1934 building is having a facelift, with its entrance being moved to the eastern end, from a new Arena Square, while in the foreground is the roof of the former Palace of Industry. You can also see the round Conference Centre, the triangular office building Elvin House, and the exhibition halls and multi-storey car park of the 1970s Wembley Complex. 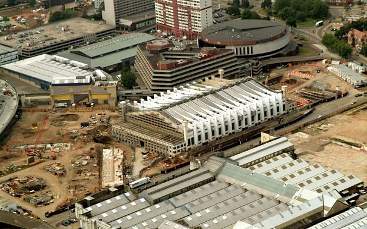 3. Aerial view of Wembley Arena and surrounding buildings in 2005. (Image from the internet)

The Arch, which was to be the distinctive feature of the new Wembley Stadium, was raised into place in 2004. However, there were problems and delays with the construction project, and it was not until March 2007 that stadium was ready, at a final cost of £757m. A new “White Horse Bridge” provided improved pedestrian access from the High Road, and Wembley Central and Stadium stations. Local residents got the chance to look at the new stadium, before the start of what it was hoped will be a legendary history to match that of the “twin towers”. 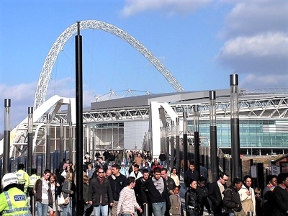 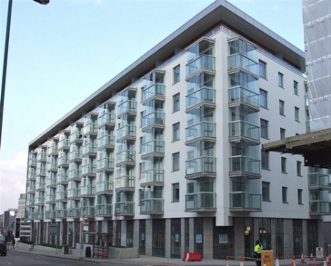 5. Forum House, in 2009, with construction on the former Conference Centre site underway beside it.

The refurbished, 12,500 seat Wembley Arena had reopened in April 2006, hosting the London leg of Depeche Mode’s “Touring the Angel” tour. Other construction work, for what Quintain originally called Wembley City, was going on nearby. Forum House, between the Arena and Empire Way, was their first residential block to be finished. By 2007, the Conference Centre next door, and other 1970s buildings, were being demolished to make way for larger schemes. 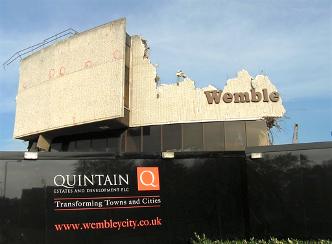 Among the projects completed over the next few years were the 4-star Hilton Hotel, across Lakeside Way from the Arena, the Quadrant Court flats and several blocks of student accommodation. With more people living in the area, a gym and small branches of Tesco and the Co-op on the ground floors of several new buildings helped to provide amenities. However, the most striking student block in Wembley Park, Victoria Hall (or “the helter-skelter”), which opened in North End Road in 2011, was not one of Quintain’s buildings. 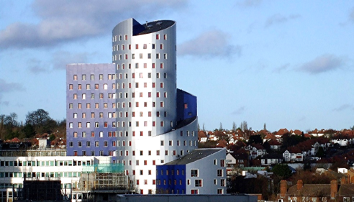 7. The Victoria Hall student accommodation building, as seen from the stadium in January 2012.

The Olympic Games returned to Wembley in 2012. Although the main venues were at the Olympic Park, in East London’s Stratford district, both the stadium and the arena hosted sports events. For the 90,0000-seater stadium it was, of course, football matches, with three group games involving Great Britain’s men’s and women’s teams, two semi-finals and both finals. Wembley Arena hosted both the badminton and rhythmic gymnastics competitions. These required extra facilities, which were housed in temporary buildings on the former Palace of Arts site, with a special footbridge built over Engineers Way to link them to the arena.

While new buildings were going up, one of Wembley Park’s oldest buildings was almost destroyed by a fire in 2013. The Lodge to Richard Page’s estate (at least a century old when it was pictured at the start of Part 3) had already seemed accident-prone after it was hit by a runaway bus in 1973. Sadly, this Grade II listed cottage, at the corner of Wembley Park Drive, is still in a terrible state, with its repair hampered by the alleged arson that started the fire.

2013 was also a milestone year for the regeneration of Wembley Park. Quintain’s London Designer Outlet (“LDO”) opened in October. This large development of shops, eating places and a multi-screen cinema was a visitor attraction, and a facility for local people. Under an agreement with the Council, Quintain were allowed to cover the Bobby Moore Bridge tile murals with large vinyl sheets advertising the LDO. That autumn also saw Brent Council move its 2,000 staff from the Town Hall in Forty Lane, and other buildings, into a brand-new Civic Centre. 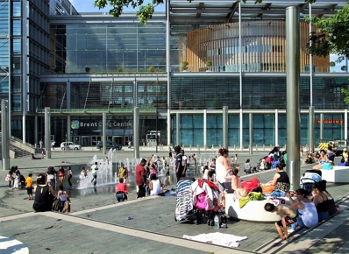 Brent’s new civic home had been built on part of the former Palace of Industry site, and the last section of this final relic of the 1924 exhibition had been knocked down in 2013. One of the first events put on by Brent Museum in the Civic Centre was a display marking the 90th anniversary of the British Empire Exhibition. Quintain had saved some of the concrete decorative lion heads when the “Palace” was demolished. Wembley History Society, and the Exhibition Study Group, worked with Quintain and Brent Council to put a “Wembley Lion” on permanent public display. It was unveiled in July 2014, on the green space in Wembley Hill Road, near the LDO. 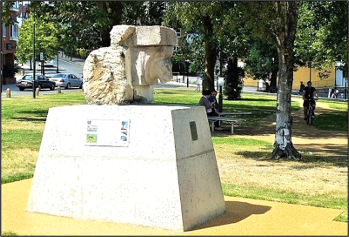 The use of the site opposite the arena for the 2012 Olympics had delayed its redevelopment by Quintain. Their large development of “Tipi” branded rental apartments, finally came on stream in 2016. The brick-faced blocks were around a private green space, and were known as Emerald Gardens. A road behind them was intended to commemorate the Palace of Arts, which had previously been on that site, before being demolished in the early 2000s.
Although Quintain still had plenty of land at Wembley Park to develop, they acquired some more in early 2016, when they bought Fountain Studios. From 1993, Fountain had been using the former Studio 5 building, and hosted the production of many famous TV shows. They had to close by the end of the year, with their last ever broadcast the live semi-final of that year’s “X-Factor”. Plans have since been put forward to redevelop the area as the Fulton Quarter, but the building reopened as Troubadour’s temporary Wembley Park Theatre in October 2019. 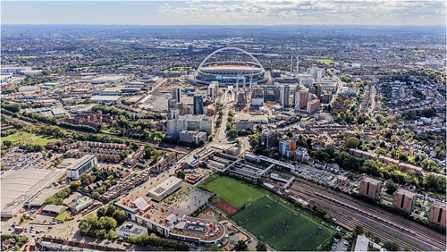 11. An aerial view across Wembley Park in 2017. (Courtesy of Julian Tollast / Quintain Plc)

At first sight, Wembley Park seems to be drowning under a sea of tall buildings in recent years, but there are some mitigating factors in its planning. Just as at the 1924 exhibition, there are green spaces between the concrete buildings, such as Elvin Gardens, behind the Civic Centre. A seven-acre park will soon be open, including a water feature. A community centre, The Yellow, has been provided, in a road remembering Wembley Park’s heritage. The long-promised primary school has yet to be built, however, and I am one of those who believe its proposed site, on York House’s car park, beside a main road with poor air quality, is a mistake. 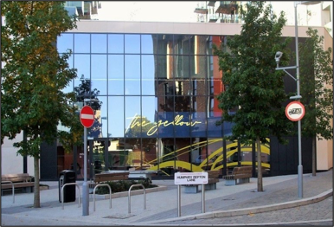 A major upgrade of Olympic Way was announced in 2017, with Brent Council agreeing to give Quintain a £17m contribution to its cost out of Community Infrastructure Levy payments. In April 2018, Wembley History Society asked both parties to put the Bobby Moore Bridge tile murals back on permanent public display, as part of those improvements. Among the features that have appeared beside the main route to the stadium, along with new trees, is the BoxPark food hall and entertainment venue. 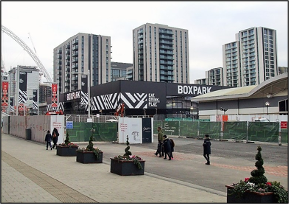 13. Olympic Way improvements in progress, January 2019, with the new BoxPark and blocks of flats.

Despite strong opposition from local historians and residents, Brent’s Planning Committee agreed in July 2019 to allow the tile murals in subway to be covered with LED panels that can be used for advertising. Quintain had agreed to put one of the mural scenes, showing England footballers at the old “twin towers” stadium, on display as part of their public realm upgrade. In January 2020, three more scenes were put back on display for a few weeks, at the start of Brent’s London Borough of Culture year. Wembley Park’s sports and entertainment heritage covers more than just football, and I hope that its story will, in time, be properly celebrated! 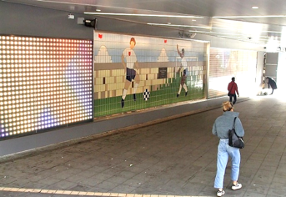 14. The Bobby Moore Bridge subway in November 2019, with lights, and one tile mural scene on show.

Thank you for reading Wembley Park’s story; I hope you’ve enjoyed learning some interesting things about it. This series has ended, but there will be more local history next weekend!

Thank you very much Philip for all your work on this really interesting series of article.