Five years ago there were protests about what was called a 'land grab' of a Wembley open space popularly known as Copland Fields.  When Ark Elvin took over Copland High School the government found money for a brand new school for the academy chain. Copland had been campaigning for years for a new building because the school was in such bad condition.  There had been plans for a 'Copland Village' development at the time to pay for a new build but the plans never came to fruition.

Muhammed Butt,  leader of Brent Council, then a governor at Ark Elvin who have been in favour of the academisation of Copland, strongly backed Ark's  plans but found himself in conflict with local residents, who valued the access to green space in a heavily built up area.

The plans were approved and Ark Elvin got its new building and extended its footprint, while Elsley Primary doubled its size with an additional new building, and both they and St Joseph's enclosed part of the space that they'd had access to by covenant.  Residents were left with a redirected Public Right Of Way (PROW) which is a path lined on both sides by a high fence and warning signs that this previous publicly used space was now 'Private Land.' 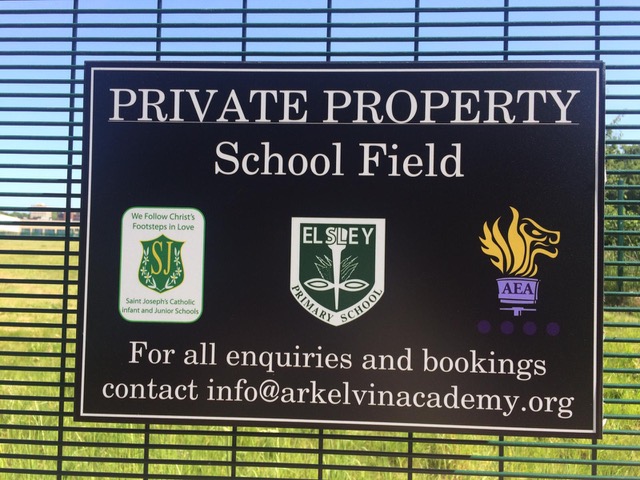 Local residents had used routes across this space to access the schools and Alperton via the bridge across the railway. A map of these routes was submitted at the time. 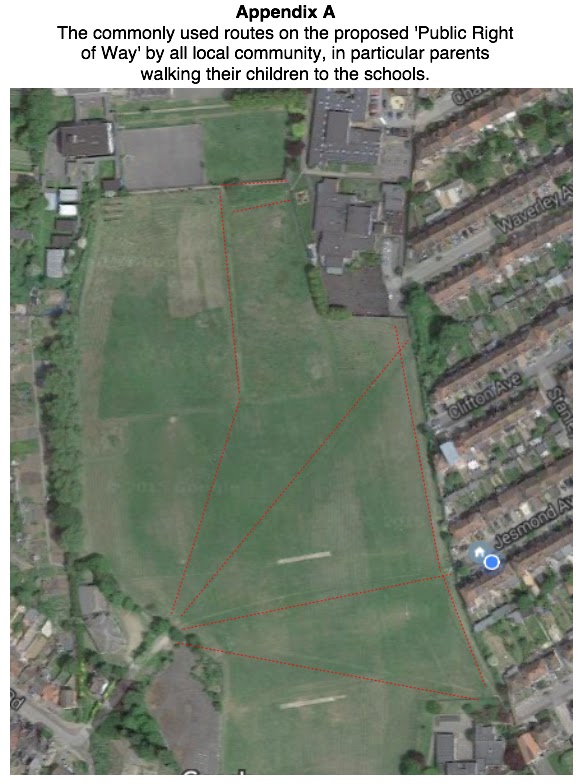 Those routes are now closed except for the main footpath. At the time local  resident Chetan Patel told Annabel Bates, the headteacher of Ark Elvin:


With respect to ARK's planning application (ref 15/3161) for the school redevelopment, I believe your proposal breaches the community's 'Public Right Of Way' onto the existing fields in accordance to Highways Act 1980 Section 130A.

The community has had access to the existing park without any objections from ARK or from the previous management of Copland Community School for many decades now. The law assumes that if the public uses a path without interference for some period of time – set by statute at 20 years - then the owner (ARK) had intended to dedicate it as a right of way.

ARK's proposed development of the school can only be described as 'land-grab' with no consideration for the community users and the Law.

You may well ask, why is this coming up again 5 years later/ The answer is that since then we have had major housing developments in Wembley Central: Elizabeth House, Brent House and the Twin Towers with more to come alongside the Chiltern line and at Ujima House and on the former Copland site fronting the High Road.  Planners admit most are deficient in amenity space but point to the accessibility of  King Edward VII Park in Park Lane.

During lockdown residents have told Wembley Matters that King Eddies is now overcrowded because of the many new residents who have no gardens in which to exercise and enjoy fresh air. Longer term residents are now referring back to that loss of Copland Fields and reflecting on the access they used to have:

Since moving to Wembley in the mid 1980s, Coplands Fields as it was known, was open to the public,  myself and friends always exercised our dogs freely on this open space,  flew Kites, off road remote control cars, played ball games, Rounders etc.  It was a well used space by Asian cricketers (on designated hard surface - which I think no longer exists)  Numerous local Football groups (Somali and Romanian) played regularly at weekends and during the week early evenings.  Wembley Youth Club had unlimited access.  A Volleyball Group set up their own nets in the far corner near Elsley Primary.

One of the best things about this open space  was it allowed you to fly kites, remote control planes and helicopters as it has no trees in the middle, unlike King Eddies which does have obstructions such as trees.   The public footpath and fields provided a quick short cut from Alperton to High Road, It was consistently used by parents from Wembley Central and Alperton area walking their children to schools St Josephs RC School, Elsley and Oakington Manor.  All the people living in Tokynton Ward are completely cut off from using this space.

No CCTV evident on footpath which is like a dog's hind leg and nowhere to run if attacked.

St Josephs regularly (or did prior to Covid) use the space, Ark Elvin does not as it has its MUGA's designed in with artificial grass, and does not have access via a gate or anything unlike St Josephs and Elsley.

The Wetlands you refer to is within the boundaries of the Ark Elvin Academy.  I seem to remember discussing this with a Biology Teacher who at the time said it was going to be utilised by the students to grow stuff and create a bio-diverse environment for nature and study.

I might add it makes a mockery of Brents Green Park and Open Space document, which clearly states that Wembley Central is massively deficient in green space, considering in the last few years more than 1800 new flats have been built with yet more to come.  In 2011 census the pop of Wembley Central was approximately 15,000 I think we are now in excess of 25,000 and when all these flats are let we will be double in less than 10 years.  The Brent House development in the report clearly states its deficient by 20% in its amenity space with respect to the number of residents it will hold.

It is hard to convey the nature of this enclosure of land in words so I have made this short video of the path of the redirected public right of way:

Four years ago Brent Council wrote to a resident to say what needed to be done to claim a right to access to the other footpaths across the Copland Fields as shown on the map above LINK.

The evidence sheet that needs to be submitted is HERE and Guidance from the Ramblers Association HERE.

It is late in the day but if nearby residents think it is worth the effort then good luck to them.