While most Brent Council committee meetings have been cancelled or postponed, as well as the Council's AGM which was due to be held this week, the Planning Committee continues via the internet.

Nex Wednesday's meeting considers a number of heavy-weight planning applications, worth millions, including two that were deferred at the May 6th meeting.

The application for Ujima House, on Wembley High Road, was deferred after a late objection was received from the landowner of neighbouring Lanmor House. His email objecting is not available on the Planning Portal (it is just noted) and of course as usual the 'Consultee' comments are linked but not actually published.

The email's contents can only be gleaned from the Planning Officers' summary LINK:

Objections have been received on behalf of the owner of the adjoining site at Lanmor House (370 to 386 High Road) and part owner of 26-29 Ecclestone Place.

A summary of the concerns are set out below:

1. Consultation
The objector considers that there was a lack of consultation with the adjoining land owner during both pre-application and application stages.

With regards to consultation requirements for the planning application itself, the Council did post site notices outside the application site and the application was advertised in the local press. In addition, consultation letters were sent to all nearby occupiers. This included the commercial space and all flats within Lanmor House, and 26 to 29 Ecclestone Place.

The Council therefore exceeded its statutory duty for consulting on the planning application.
Further details of the comments received (including an objection received from 27 Ecclestone Place) are discussed within the “consultation” section below.

The NPPF paragraph 40 states that local planning authorities should encourage applicants to engage with the local community before submitting their applications, and Brent's adopted Statement of Community Involvement reinforces this by setting out recommended pre-application engagement for planning applications. For an application of this scale, discussions with neighbours and public meetings and exhibitions are recommended. However pre-application engagement is not a statutory requirement. In this case, local residents were invited to attend two public exhibitions and give feedback on the proposals, although non-resident property owners were not explicitly invited.

2. Accuracy of reporting
The objector considers that there was a lack of consideration of the proposal upon Lanmor House, taking into account the recent planning history and works carried out to Lanmor House. They also raised concern about the scale of surrounding buildings not being accurately reported and inaccurate reference to the building line being in line with adjoining sites where in fact it projects forward, and the resulting impact of the forward projection upon neighbouring amenity.

The above matters are discussed within the "remarks" section below.

3. Building scale and mass of envelope parameters
The objector has expressed concern about the footprint and resulting depth of the building and the impact on neighbouring occupiers, specifying that there would be an overdevelopment of the site.

Once again, this is expanded upon within the "remarks" section below.

5. Daylight and Sunlight
The objector considers that there are inaccuracies within the daylight and sunlight report in terms of the reporting of the windows within Lanmor House and no consideration of the impact upon the communal roof top garden in Lanmor House.

This is expanded upon within the "remarks" section below.

7. Highway matters
Matters have been raised with regards to construction traffic, servicing and delivery traffic, and access to the proposed building.
This has been discussed within the remarks section below.

8. Streetscene
The objector considers that the assessment of the impact on the streetscape does not consider the curve in this part of the High Road and the potential for a “canyoning” effect along this part of the High Road with the nine storey building on the opposite side. Concerns are raised with the impact on the micro-climate wind tunnelling effect. They also believe that the Design and Access Statement misrepresents the building when viewed from the east as it is only shown as nine storeys.
These matters are discussed within the "remarks" section below.

The  officers find reasons to reject the objection (see report linked above) and recommend approval of outline planning permission but it appears likely that the owner of Lanmor House will take things further.

The second deferred item is the development at Sudbury Town Station. This was initially rejected outright by the Planning Committee but officers' quickly proposed that it be deferred so that they could talk with the developer, Transport for London and this was, controversially, accepted by Committee members. LINK

These discussions have resulted in an offer by the developer  to contribute £600,000 to 'enable the provision of six 3 bedroomed houses' off-site. Committee members may wish to explore the mathematics involved.

The developer has also offered one additional blue badge parking space and confirmed that the offer of contributing to the cost of a CPZ would be available for 10 years.

The officers report LINK  gives a blurb for the Committee to adopt if they are minded to still refuse the application. 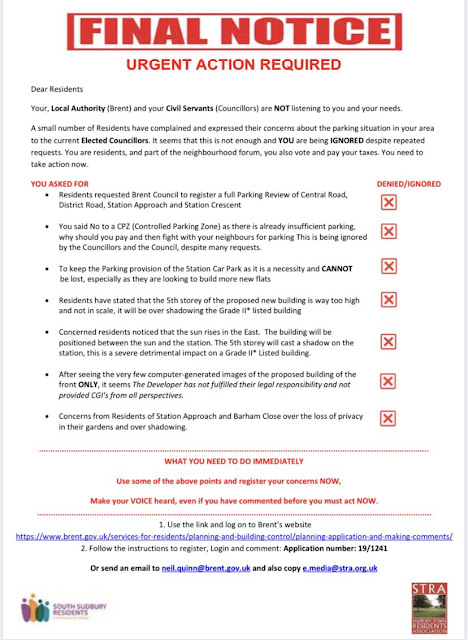