Thank you for joining me again, on our journey through Wembley Park’s history. Part 4 is here, if you missed it. We are moving into times within the life of many of you, so please feel free to add your own memories to (or correct, if necessary!) anything that I write from now on. 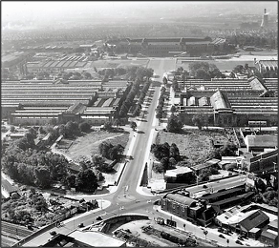 1. Wembley Park, seen from above the station, late summer 1948. (Britain from Above image EAW018314)
After the Olympic Games, in the summer of 1948, Wembley Park returned to “business as usual”. The Palace of Industry was a warehouse for His (then Her) Majesty’s Stationery Office, storing stocks of its publications, from Acts of Parliament to the Highway Code, and millions of envelopes and paperclips for the Civil Service. A wide variety of businesses used other surviving buildings in the former (British Empire) Exhibition grounds. 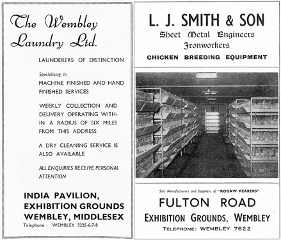 The Empire Pool’s swimming bath was never used again after the Olympics, and the arena became a year-round sports and entertainment venue. The Wembley Lions ice hockey team played there throughout the 1950s, but ice pantomimes also began here in 1950. Other regular annual fixtures from that year were the All-England Badminton Championships and the Harlem Globetrotters basketball matches. Six-day cycle races, and amateur and professional boxing, also featured in the programme, together with the Horse of the Year Show from 1959.

In 1955, a second television channel was launched in Britain, funded by showing adverts. The ITV franchise for weekdays in the London area was awarded to Associated-Rediffusion, who bought the former film studios in Wembley Park Drive to use for making programmes. They soon had more ambitious plans, and built the largest TV studio in Europe, next door to their existing premises. Wembley Park’s Studio 5 opened in June 1960 with “An Arabian Night”, a spectacular 3-hour show which was broadcast live across the whole ITV network. 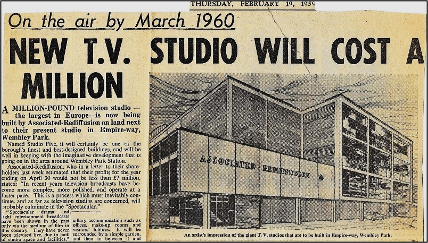 4. A cutting from the "Wembley Observer", about plans for the new studio. (From the late Richard Graham)

More building work was going on nearby, with several new office blocks appearing on either side of Olympic Way, close to Wembley Park Station. Apart from that, however, much of the former British Empire Exhibition site remained in drab industrial and commercial use, with firms such as Johnson Matthey & Co (metals) and Fisher Foils among them. Even the former Neverstop Railway station in North End Road was used, as a car repair workshop. 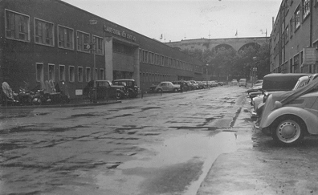 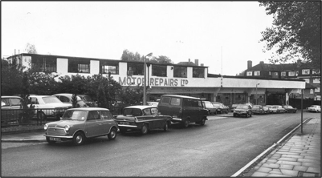 My own first memory of Wembley is arriving on a chartered train, packed with boys from East Sussex, in April 1959. Schoolboy football international matches had begun at the stadium in 1950 (women’s hockey internationals, to attract groups of schoolgirls, started the following year), and I was one of the 95,000 who had come to watch England v. West Germany. We won 2-0, but I have fonder memories of another Wembley match between the two countries, seven years later, which I saw (in black and white) on a television set at home with my family!

7. A 1963 poster and 1966 programme for famous events at Wembley Stadium. (Internet / Terry Lomas)
Wembley Stadium had been fitted with a new roof in 1963, so that all spectators would be undercover. This did not apply to events where part of the crowd was “on the pitch”, such as the memorable boxing match in June that year. Henry Cooper, who lived in Wembley, knocked down Cassius Clay (later known as Muhammed Ali), but still lost the contest. The 1960s also saw a new sport come to Wembley Park, with the opening of a 24-lane ten pin bowling alley, the Wembley Bowl and Starlight Restaurant, between the arena and Empire Way. This was converted to a Squash Centre in 1974, and later to a bingo club. 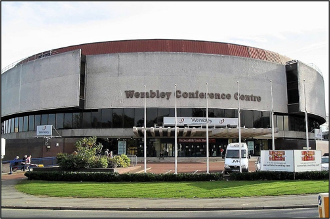 Sir Arthur Elvin had died in 1957, and by the 1970s his Wembley Stadium company had become a subsidiary of the British industrial conglomerate, BET. They set about adding to Wembley Park’s attractions, with a new hotel, large exhibition halls and the Conference Centre. This opened in 1977, just in time to stage the Eurovision Song Contest. It hosted many other major events including, from 1979, the Benson & Hedges Masters Snooker Tournament. From the 1970s, the stadium car parks were home to the popular Wembley Stadium Sunday Market. 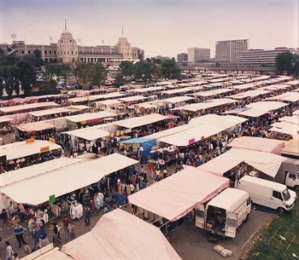 Popular music shows at the Empire Pool had begun in 1959, with the first single act concert by The Monkees in July 1967. Wembley hosted its first Stadium concerts in the early 1970s, and within a few years had become one of the “must play” venues for top performers on their tours. In July 1985, it staged the Live Aid charity concert, raising funds for famine relief in Africa, watched on television by an estimated 1.9 billion people around the world. The “Free Nelson Mandela” 70th birthday concert in 1988 helped to bring about his release from prison, and Brent’s Mayor was able to welcome him to Wembley for an anti-apartheid concert in 1990.

The former Palace of Engineering was demolished in the early 1980s, to make way for more modern commercial and retail buildings. Under the planning agreement for this development, Brent Council adopted Olympic Way (a private road, built by Wembley Stadium in 1947/48) as a public highway. In 1991, when Wembley was a key part of England’s bid for UEFA’s Euro ’96 football tournament, the Council decided to pedestrianize this main route to the stadium.

As part of this scheme, a wide subway was created under Bridge Road, to give people on foot a safer journey to Olympic Way from Wembley Park Station. The walls of the subway were decorated with specially designed ceramic tile murals, celebrating sports and entertainment events from the history of the stadium and arena. Named “The Bobby Moore Bridge”, the new structure was opened in September 1993, by the widow of England’s 1966 World Cup-winning captain, who had died from cancer a few months earlier. 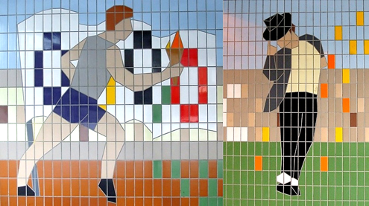 11. Two of the tile mural scenes in the Bobby Moore Bridge subway. (Photos by Philip Grant, 2009)

Wembley Stadium had been made all-seated (following the report on the 1989 Hillsborough tragedy), so that when Euro ’96 was staged in June 1996 it had a capacity of 76,500. England played all three of their group-stage matches there, including a 2-0 victory over Scotland. Wembley also saw the host nation’s quarter and semi-final games, and the final, won 2-1 by the reunited Germany v. the Czech Republic, after beating England on penalties in the semis.
HERE