I am pleased to kick off the New Year with this fascinating article from Philip Grant. Thank you very much Philip for your many valuable contributions to Wembley Matters.


The struggle against apartheid in South Africa is now history, and a talk at Wembley History Society on Friday 18th January will relate how Brent and London played a part in the movement which helped to bring about freedom, equality and democracy in that country. 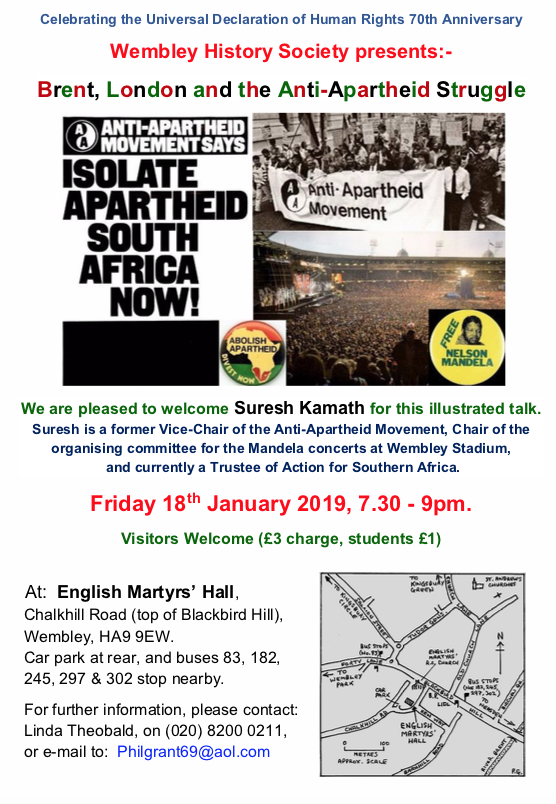 But is the Anti-Apartheid story, and that of Nelson Mandela, the key figure who symbolised the struggle, still relevant today? I would say that the answer is a definite “Yes”. Many abuses of human rights remain in our world, and there are lessons to be learned about why and how they should be challenged, and how they can be overcome.

Visitors are welcome at the history society’s talk, and I hope that many will come, and be inspired by it. By way of encouragement, I will share with you a little “local history” about Nelson Mandela.

The African National Congress, a multi-racial organisation seeking the right to vote for all South Africans, not just those who were white, was in its infancy when Nelson Mandela was born in 1918. He joined the ANC in 1943, while working as a lawyer in Johannesburg. His active involvement in the campaign against apartheid (the racial segregation imposed on his country by a hard-line white-only government) often saw him arrested for alleged sedition, and even prosecuted (unsuccessfully) for treason in 1956.

After the ANC was banned in 1960, Mandela went “underground” to organise resistance against South Africa’s repressive government. Early in 1962, he secretly left the country, visiting a number of African countries and coming to England in April. It was during that visit that he addressed a meeting of the Willesden Trades Council at Anson Hall. I have not been able to find any mention of this event in the “Willesden Chronicle” microfilm records at Brent Archives, so the only item I have to illustrate his visit to the borough that year is a photo of the hall.


On his return to South Africa, Nelson Mandela was arrested in August 1962, and jailed for five years, after being convicted of leaving the country without permission. While serving that term, he was charged, along with other ANC activists, with sabotage (which he admitted) and plotting the violent overthrow of the government. Following a trial in 1964, at which Mandela’s defence speech gained world-wide attention (despite the South African government’s attempts to censor it), he was sentenced to imprisonment for life.


That might have been the end of the story, but Suresh Kamath’s talk will show that it was not. The Anti-Apartheid Movement in this country eventually led to a “Free Nelson Mandela” concert at Wembley Stadium in July 1988, marking his 70th birthday. The growing pressure for change in South Africa, from this and other initiatives, finally saw President F.W. de Klerk lift the ban on the ANC and release Mandela from prison in February 1990.


There is much more evidence of Nelson Mandela’s second visit to Brent, in April 1990, than the one 28 years earlier (with all but a few months of that time as a prisoner). He was invited to address a “Free South Africa” concert organised in his honour, at Wembley Stadium on Easter Monday. He came, and gave a moving speech calling for a continued effort to end apartheid, and bring democracy for all in his country. This aim was finally achieved four years later. 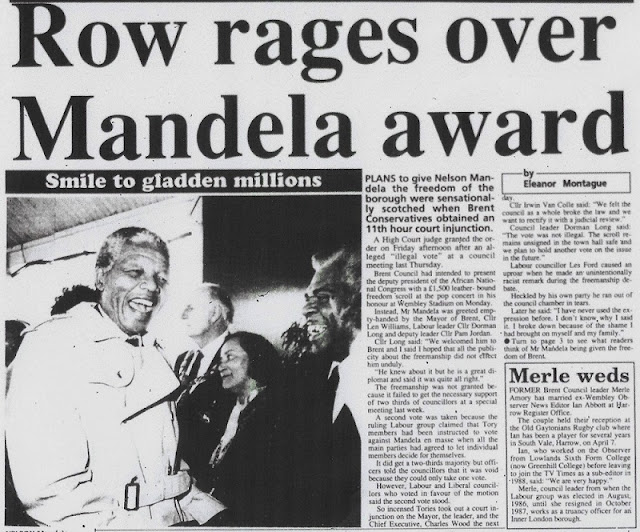 Front page report of Nelson Mandela
at Wembley, from the “Wembley Observer” 19 April 1990.

Unfortunately, although the front page of the “Wembley Observer” showed a smiling Nelson Mandela meeting Brent dignitaries, it was another local story that grabbed the headlines. Brent had planned to mark the occasion by making Mandela a Freeman of the Borough, but the plans went wrong at a Special Meeting of the Council the previous Thursday. Party leaders had agreed that it should be a free vote, but at the last minute Conservative councillors were instructed to vote against awarding the honour, and the resolution did not gain the necessary two-thirds majority. 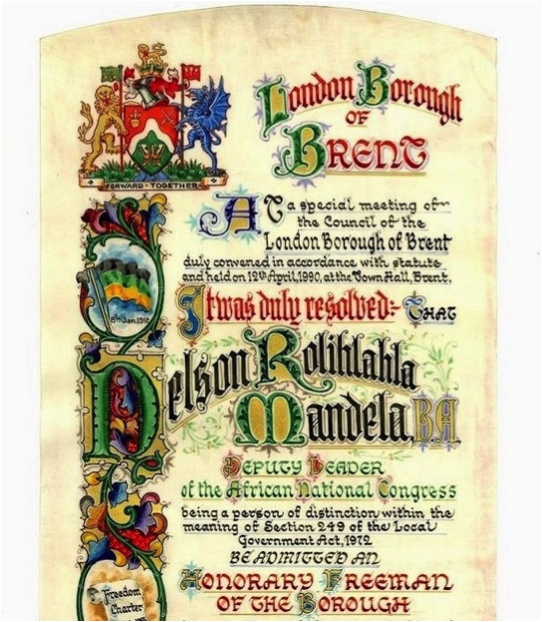 Extract from the scroll which would have been presented to Nelson Mandela in April 1990, making him a Freeman of Brent.

In an attempt to ensure that ‘it was duly resolved’ to award the honour to Nelson Mandela, a second vote was taken, and this time the resolution was passed. However, in order to stop the Mayor and Council Leader (Labour’s Dorman Long) from going ahead with the presentation of the scroll and ceremonial casket (which had already been prepared, at a cost of £1,500), the Conservatives obtained a High Court injunction, on the grounds that the second vote was void.

If anyone who was at that Special Council meeting would like to add a comment below, I would be interested to know what the reasons were for the preventing Brent’s award of the Freedom of the Borough to Nelson Mandela in 1990.

It was not until June 2013, a few months before his death at the age of 95, that our Council unanimously resolved to confer the honour of Freeman of the London Borough of Brent on Nelson Mandela LINK . By that time it was clear to all, from Nelson Mandela’s words, actions and example, that this was a man worthy of the honour. Even though his time in our area was only a brief one, Brent’s links with his name and the anti-apartheid struggle, and the lessons to our community from all that he stood for, are strong.

Last year, on the centenary of Nelson Mandela’s birth, Martin posted a blog calling for some lasting recognition in Wembley for the 70th birthday concert at the Stadium, which ‘did an enormous amount to communicate the struggle against apartheid’. LINK

With the Council gearing-up its plans to celebrate being London Borough of Culture in 2020, it is surely time to push for a permanent memorial to Nelson Mandela’s links with Wembley.