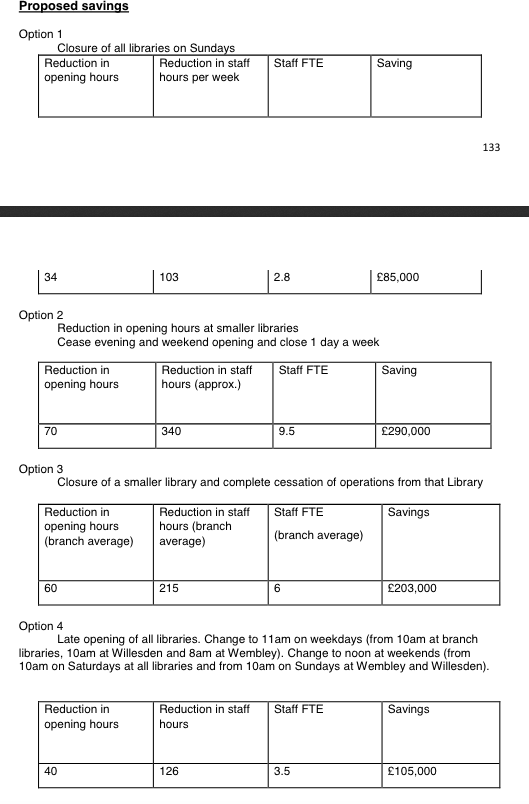 Brent Council may be relying on local people having short memories regarding the above options for cuts to library services but they did promise back in 2011, when Brent libraries were 'transformed' by closing half of them, that opening hours would be increased and there would be enhanced service provision in the remaining libraries. Certainly the promise to extend opening hours was kept.  In addition after the very bad publicity and damage to the council's relationship with the local community, a change of political leadership brought a more sympathetic attitude to local library campaigners and some support for volunteer led libraries.

However the budget proposals for reduced hours or another closure  may well bring back bitter memories and accusations that the 2011 promises have not been kept.

The Budget Scrutiny Panel have come out in opposition to the proposals but suggested an alternative which was abandoned before, of handing over the libraries to a charitable trust. This will also prove controversial as it reduces democratic control and is contrary to Brent Council's recent love to bring arms-length and out-sourced services back in-house. They also recommend increased use of volunteers.


This is what the Panel had to say:

CWB006 proposes to reduce library hours and offers no argument that residents will benefit from a better service if this is implemented. We do not agree with this proposal and believe it should have been place in the “Most Difficult” appendix.

We are pleased that residents in Brent know they have six council-run libraries in the borough that they can go to seven days per week. Scaling back on this universal service would undermine the trust the council has slowly rebuilt with the community following the closure of several libraries before 2014. We also believe there is a real danger that demand will be dampened if people become confused about which libraries they can go to at certain times and which they can go to at others.


There are other options we feel the council could consider before passing this proposal. The first of these is transferring the library service to a charitable trust as other authorities – including Glasgow, Luton and Fife - have done. If our library service were run in this way, the six buildings could become eligible for business rates relief of at least 80 per cent, presenting significant savings without a loss in the service.

We recommend that the council gives serious consideration to this idea.

Secondly, the largest mistake, in our view, that the council made before adopting its proposal of library closures a few years ago, was refusing to give local community and volunteer groups any opportunity to run the service. We recommend that this time every effort should be made to see if volunteers can take over some of the services to prevent closures. We are aware that some libraries require a permanent security presence and that this work cannot be done by volunteers, but this is not the case in every library and so should not prevent a volunteer team from keeping these branches open.

Thirdly, we recommend that Brent explore all options which help to maximise the use of library buildings and extract additional financial value from them. For example, residents in flats above shops often struggle to get hold of council recycling bags for their waste. If they could collect these easily from their local library this would be easier for them and give the library further status as a local hub for council services. Likewise, there is much potential to rent out event space in some of our libraries, like the upstairs floors in Harlesden Library, and we think more work needs to be done to sweat those assets.

This are just some starting ideas, but it is our fundamental belief that any alternative to make savings in the service are considered before we resort to the drastic step of partial closures.

Pros and Cons on Library Trusts can be found HERE
HERE