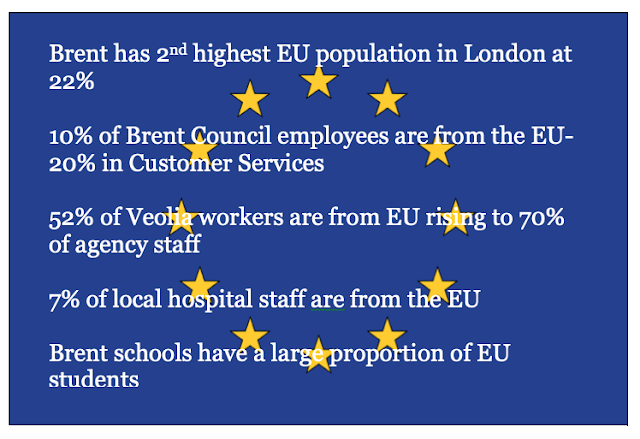 The leader of Brent Council, Cllr Muhammed Butt, the Cabinet Member fort Social Cohesion, Cllr Tom Miller and Brent CEO Carolyn Downs all sought to reassure EU citizens living in Brent that they were valued and welcome members of the Brent community at last night's Time to Talk session on Brexit.

Cllr Miller spoke about the 60/40 referendum vote for Remain in Brent and said that public opinion had since shifted further in favour of Remain.  This was why Brent Council had recently recorded its support for a People's Vote on the deal Theresa May had negotiated.  He condemned the fact the EU citizens had been denied a vote on their own future in the Referendum. EU families had been put in a precarious position, unable to plan for their future in terms of housing, work and their children's education.

He said that the Council intended to voice its concern over Brexit, ensure that Brent remains 'open' during the transition period, work with representative EU citizen organisations in the borough and continue to support a public vote on the final deal.

Carolyn Downs, addressing EU citizens directly said, 'We will stand by you and stamp on any inappropriate behaviour towards EU nationals.'  She added that the concerns of the  40% of Brent voters who had voted to Leave should be explored and addressed by the council.

The Time to Talk session was not as well attended as organiser may have hoped with open a small number of young people and not as many EU nationals as I would have expected.  It was interesting that although there were a number of people present who I know to be supporters of Lexit (a Left Brexit) they did not air their views in the main session, although the format of the meeting may have been against them:

Attendees were tasked with discussing their concerns in  groups and reporting one issue back to the full meeting. These are some of the concerns mentioned:
In the panel discussion a further concerns was raised about the access of people with disability to the settled status application process and more broadly to discrimination against disabled people becoming more prevalent in the post-Brexit atmosphere,

Mandy Brammer, head of the Brent Registration Service gave details of the EU settlement scheme that would give EU nationals access to work, healthcare, schools and public funds.  A 5 year continuous residence will be required and an 85 page document gives details of the process to gain settled status.  It does not apply to Irish citizens.  The cost is £65 for an adult and £32.50 for children. It is free for Looked After Children,

If EU nationals do not apply it will be illegal for them to stay in the UK, they would have no right to work and no access to vital services.  The process starts on the 30th March 2019 through to December 31st 2020.

Regarding contacting affected residents I suggested that the Registration Services speak at Parent Forum meetings in local schools about the settlement process and Mandy Brammer confirmed that they would be able to do this.