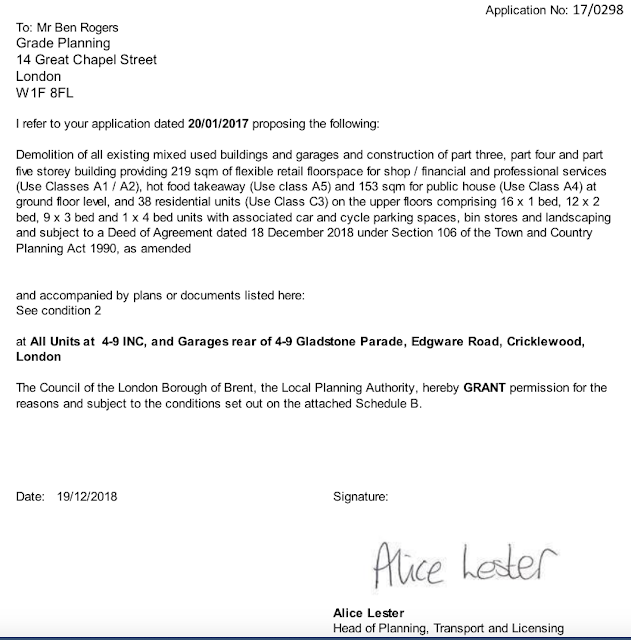 Less than a month after Alice Lester, Brent Council Head of Planning, sent formal permission for the development at  4-9 Gladstone Parade, the developer has come in with a new application to add an additional storey and an additional 16 units to the proposal. LINK

Their knowledge of the local area is a little suspect when they can't spell the name of the road correctly!:

In comparison with the previous scheme, the proposal introduces an additional storey to the Edgeware Road frontage as well as a partial additional storey at both the Dollis Hill Avenue and Gladstone Park frontages. The raising of the height of the building by 712mm is minimal in the context of the overall development and will barely be perceptible in the wider street scene. The proposal is of a similar, albeit smaller, height to the Fellows Square development on the opposite side of Edgeware Road and therefore the increase in height is considered accepting  (sic) in terms of the emerging local context.

The increase in the number of units is based on a viability assessment:


The Development Appraisal, prepared by James R Brown and Company Ltd, assess the financial viability of the proposed scheme and the residential market in London.
Since the viability review of the previous scheme, dated March 2017, the new homes market in London has increasingly and significantly weakened. Residual land values are therefore reducing due to weaker new homes values and increased build costs. Subsequently, the viability of the 38-residential unit scheme is now substantially challenged (due to the weaker market conditions) and therefore in order to improve the viability and efficiency of the site a larger scheme of 54 units its proposed.
The residential content of the new proposed scheme contains a 34.4% affordable housing provision by habitable room, detail in paragraph 9.2 of the viability report. The appraisal demonstrates that the proposed scheme drives a negative residual deficit and falls marginally short of being viable with 16 affordable housing units in comparison to the consented scheme which is significantly unviable with 10 affordable housing units.

The revised proposal is already garnering opposition on social media: 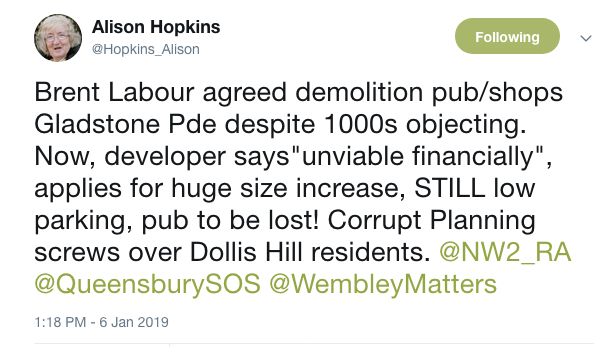 Alison has commented on View from Dolis Hill Facebook: This Gladstone Parade application smells to high heaven. Commitee gave permission for the original plans last year and the shops got evicted in April. Demolition plan went in in June. The final permission was formally given on the 19th December 2018. The NEW application went in on the 17th December, FROM DIFFERENT DEVELOPERS. In the meantime, Brent has signed a legal Section 106 agreement to get money from the original developers on the 18th December. Yet, somehow, the NEW developers had supposedly bought the site. And had meetings with Brent in early AUGUST.

The new application doesn't safeguard the chippy of course, and also seeks to remove the pub.

Combine that with Brent being hell bent on tower blocks here and giving £6 million to Barnet for a road to the new station, if it ever happens............?