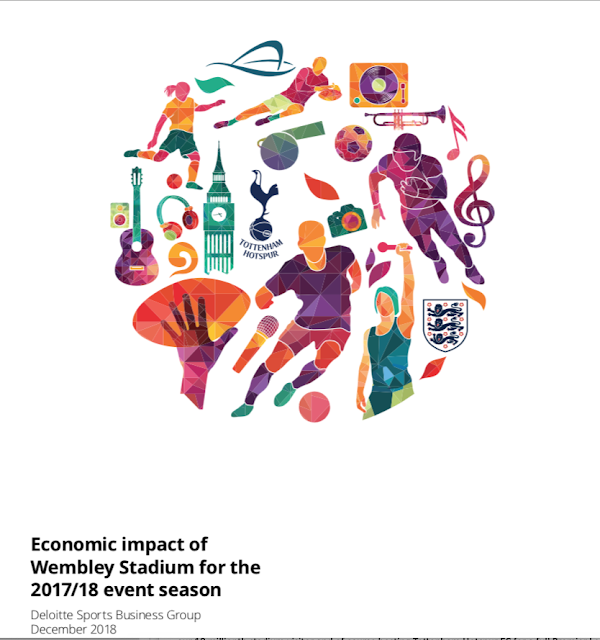 The FA has circulated a report on the economic impact of the Wembley Stadium 2017-18 season. One local resident immediately said, 'Do you belive any of this? I am sceptical.' I leave it to readers to make up their own minds and welcome your comments.

I wanted to share with you the Wembley Stadium economic impact study we commissioned on the back 2017/18 season – a unique season for Wembley Stadium marking the 10 year anniversary of the new stadium, welcoming our 10 millionth stadium visitor and of course hosting Tottenham Hotspur FC for a full Premier League season.

We entrusted Deloitte to analyse the economic impact of the stadium during this period – 58 major events, which, in addition to football, saw boxing, Rugby League, NFL and music concerts come to London.

We are looking forward to building on these successes with some of the biggest events in world entertainment, such as UEFA EURO 2020 and UEFA Women’s EURO 2021, just around the corner.

§  The 2017/18 season at Wembley saw a record 58 events and was the first time a Premier League football team had taken residency at the stadium. This higher number of event days resulted in an unprecedented amount of visitors to Wembley Stadium and the surrounding area.
§  Findings shows that Wembley’s events led to a boost of £150m to the local economy of Brent, £424m to London and £615m to England.
§  The 58 events attracted 3.8 million spectators, including 350,000 visitors from overseas. The project therefore reaffirms Wembley’s status as one of the leading event venues in the world that attracts significant numbers of visitors to England, London and Brent.
§  Deloitte’s analysis shows that the economic impact from the 58 events supports 1,800 FTE jobs in Brent, 4,900 across London and 6,100 across England.
§  Gross Value Added (GVA) is a common way to look at the value added to GDP by the production of goods and services. The GVA contribution of the 2017/18 event season was £83m to Brent, £231m to London and £334m to England as a whole.