In a series of Tweets exchanged with former Brent and Kilburn Times editor Lorraine King, Brent Council leader Muhammed Butt, offered to meet with Raheem Sterling's team over provision at Bridge Park.  This follows an article in the Daily Mail where the Council was painted as less than helpful regarding Sterling's plans for a football academy on the site. LINK 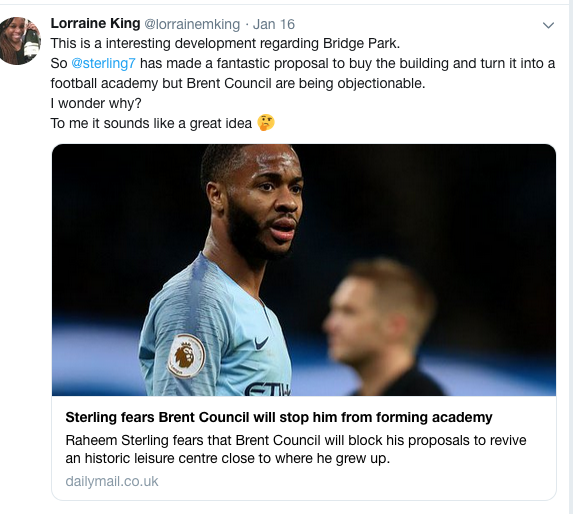 Cllr Butt  returned to Twitter in December and at present only has 236 followers. He has recently had a tetchy exchange with Michael Calderbank of Brent Central Labour Party over the Time to Talk meeting on Brexit. Calderbank felt that that the meeting was constituted in a way that left no space for debate about the case for leaving the EU while Butt said that was not the purpose of the meeting.

Perhaps Raheem should team up with the Jason Roberts Foundation, started by another great local international footballer, which is already doing similar work in Stonebridge.