Vaccines – and a little piece of Sudbury’s history

In recent months, vaccines have been in the news – both the quest for a vaccine to protect against Covid-19, and the threat to the fight against common diseases across the world caused by the pandemic’s disruption of vaccination programmes. The news sometimes reminds me about stories from local history that may not be well known, and this is one of them. Some readers may find parts of this article upsetting, but I hope the information in it will help your understanding of issues around science and health.

Smallpox was an infectious disease of humans, which had existed since prehistoric times. Caused by a virus, it killed up to 30% of people who caught it, and left those who survived badly scarred and often blinded. It is estimated to have killed around 400,000 people across Europe every year in the 18th century. At the time, it was usual for scientists to give discoveries names derived from the Latin language. Vaccine comes from the Latin word Vacca, a cow. 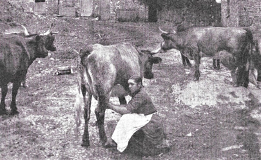 
Edward Jenner was a doctor in Gloucestershire, who realised a rumour, that milkmaids who had caught cowpox did not get smallpox, was not just an “old wives’ tale”. He experimented in 1796, by giving pus from a cowpox blister to an 8-year old boy, then exposing him to smallpox. The boy was immune to the more serious disease. Further tests of this method also proved successful, and vaccination was born. Many were horrified by the practice and opposed it, as this satirical cartoon from 1802 (supposedly published by the Anti-Vaccine Society) illustrates. 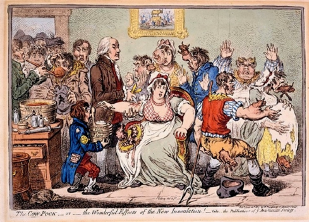 2. A cartoon, lampooning Edward Jenner's inoculations, and their imagined results! (From the internet)

Moving on a century, Sudbury was a small village with a number of farms. Some of these had become dairy farms during Victorian times, but one small farm, Poplars, was to have a different use. The British Institute for Preventive Medicine had been set up as a charity in 1891, and its first laboratory was in Great Russell Street. German medical researchers, the previous year, had found that antibodies to fight human diseases could be made by infecting guinea pigs. To produce these in quantity required larger animals, and by 1894 the Institute had bought Poplars Farm, quite easily reached by train from Euston, to Sudbury and Wembley Station. 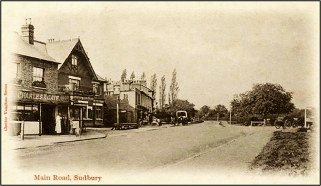 The Institute undertook scientific research into the causes, prevention and treatment of disease (like that set up by Louis Pasteur in Paris, in 1887), and produced vaccines and antitoxins to help prevent or cure diseases. In Sudbury, they kept healthy horses in the fields, which were infected with disease bacteria. As their bodies produced the antibody serum, it was drained from them. The horses were put down when they became unwell from the infection. Tom the pony (pictured below) was used in this way to help produce Britain's first diphtheria anti-toxin.

4. Tom the pony, at Poplars Farm, and a vial of diphtheria anti-toxin, c.1895. (Images from the internet)

Diphtheria was once a common contagious disease, which particularly affected the young, and could be fatal. When Willesden’s Medical Officer reported ‘a most decided improvement in the matter of Infant Mortality’ in 1887 (only 55.2% of total deaths in the district had been infants aged 0-5, compared to 62.5% the previous year!), measles, whooping cough, scarlet fever and diphtheria had been significant causes of death. Alfred Salter was a bacteriologist who worked at Poplars Farm in the 1890s, and wrote a paper for “The Lancet” on the diphtheria antitoxin.

Salter had been a brilliant young medical student at Guy’s Hospital, and had to defend the work that he did for the Institute (renamed the Jenner Institute for Preventive Medicine in 1898). It’s activities at Sudbury brought protests from the National Anti-Vivisection Society, but his response was that thousands of human lives were saved through the use of their anti-toxins, and that the horses were put out of their misery quickly once symptoms developed.
Although this is an “aside” from my main theme, Alfred Salter left the Institute after he got married in 1900. He set up a medical practice in Bermondsey, and worked with his wife to fight against poverty and poor living conditions in that area. He served as a Labour M.P. for West Bermondsey between 1922 and 1945, and his wife, Ada, became the first woman Mayor in London, actively using her role to promote green socialist policies in their borough. The work of the Institute continued in Sudbury, including the production of the first anti-rabies vaccine, but change was coming to the area. The District Railway (now Piccadilly Line) opened in 1903, and the Great Central Railway began building a branch line that would run through the Poplars Farm fields. In 1903, the Institute moved to a different farm, in Elstree, where it was renamed the Lister Institute for Preventive Medicine, after one of its founders, Dr Joseph Lister. The land and its main house, The Poplars, was sold. 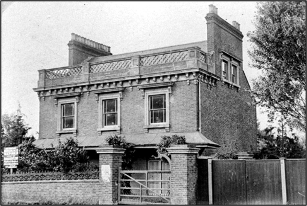 6. The Poplars, with a "For Sale" sign outside it, c.1904. (Brent Archives online image 528)
Now, I have to correct the normally reliable local history book, “A History of Wembley” (written by Wembley History Society members, and published by Brent Libraries in 1979)! It says that the house was ‘once used by Dr Martin, a vivisectionist, and the home of the Epizootic Abortion Committee.’ Dr Charles Martin was appointed Director of the Institute in 1903, so would have been involved in selling Poplars Farm. There were probably reports in the “Harrow Observer” of anti-vivisection protests then (during lockdown, I can’t check that), but there is no evidence that Dr Martin was a vivisectionist. He may have been a member of the Government’s Board of Agriculture committee, which investigated the tick-borne cattle disease of that name!

The Poplars was bought by Edwin Butler, who had a small shop and sub-post office near “The Swan”. He converted the ground floor of the house into “Butler’s Emporium”, and lived on the first floor above it. He served as a Wembley councillor for 40 years, representing Sudbury. In 1920 he campaigned for the Council to buy the last remaining part of the old Sudbury Common for public recreation. When Wembley became a borough in 1937, he served as its first Mayor, and after his death in 1945, the open space he helped to save was named Butler’s Green.

By 1911, new shops had been built on either side of The Poplars, as part of a parade called Canterbury Place. If you compare the photo of The Poplars above with the one below, taken in 2015, you can still identify the upstairs windows and chimneys of the original farmhouse! This is one of many pairs of images from the “Sudbury – Then and Now” project, which you can still see online, to discover more about the local history of this part of Brent. 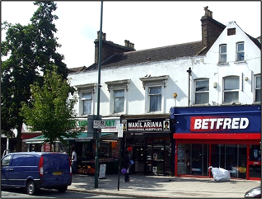 8. What was The Poplars, but by 2015 the Sudbury Supermarket, and a hairdressers, with a flat above.

Although the Institute was producing the diphtheria anti-toxin from the 1890s onwards, medicine would be mainly “private” in this country for another 50 years. When Kingsbury (popn. c.800) U.D.C.’s Medical Officer made his report for the last quarter of 1902, there had only been one infectious disease case. A child, Samuel Noad, had died of diphtheria at “Poplars”, a house that was part of a cluster of buildings at Blackbird Farm. Luckily, as ‘every precaution as regards disinfection of all articles and room was taken, … no further case has occurred.’ 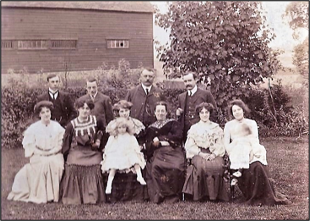 9. The families of Thomas Noad and his brother, in the garden of "Poplars", Blackbird Farm, c.1898.
By chance, a photograph of the Noad family in the late 1890s was shared with me a few years ago. Although I don’t know the names of everyone shown, Thomas Noad, the farmer, is the man standing in the centre, with his wife, and youngest child Gertrude, in front of him. His younger brother, who lived at “Poplars”, is on Thomas’s left. It may be his wife, sitting with their baby (quite possibly Samuel). Every sudden death from disease has its own tragic story.

When Kingsbury merged with Wembley in 1934, the newly combined Council brought in a scheme for immunising people against diphtheria, free of charge to the patient. There was still no immunisation at this time against measles, chicken-pox or whooping cough, which were all prevalent among children at local schools. Then, in 1941, Britain’s wartime government introduced free immunisation against diphtheria for everyone. 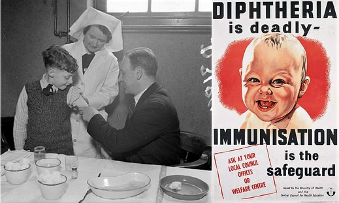 10. A boy being immunised, and a poster for a diphtheria immunisation programme. (From the internet.)

I was a post-war baby, born after the N.H.S. was set up in 1948. The note of my medical history, that my Mum gave me when I first left home, shows that I had injections against diphtheria, whooping cough and smallpox when I was a baby, with boosters for the first two before I started school in 1954. It also shows that I caught measles and chicken-pox in 1952/53 (after my older sister started school) and mumps in 1955! There were no vaccinations against those then.

After global efforts, co-ordinated by the World Health Organisation, smallpox has been eradicated, with the last reported case in 1977. Similar efforts have reduced diphtheria to just 4,500 reported cases worldwide in 2015, although 2,100 of those were fatal, mainly in children. While we wait for a vaccine that can have the same effect against Covid-19, I hope that this look at vaccines and health, through local history, has given you some food for thought.

This is my last “local history in lockdown” story for a while, but a new series, by a friend from Willesden Local History Society, will begin next weekend. Please join her, to find out which area from the south of the borough you can discover more about!

Thank you Philip.  Your lockdown local histories have been very popular and I am sure have led many people to take more of an interest in the area in which they live.  I look forward to publishing many more of your well-researched and informative articles in the future.