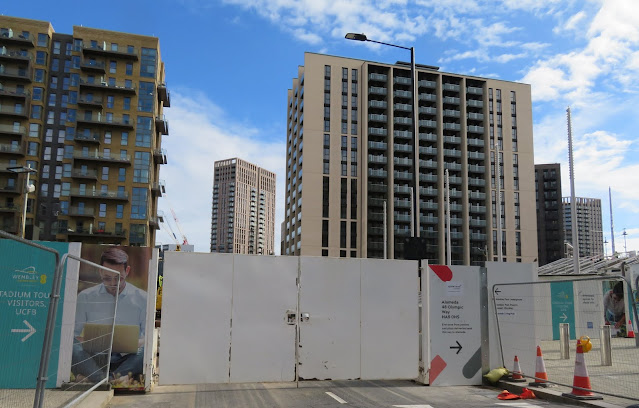 Residents in the new flats that circle Wembley Stadium have become frustrated by the length of the closure of Engineers Way on which Brent Council's Civic Centre is situated.

The closure was necessitated by the controversial removal of the Wembley Pedway and its replacement by steps.

In a series of emails addressing the issue  the Council officer concerned has set out the current situation that envisages closure until April 15th:

As with all big infrastructure projects, there may be times when work is not happening, but that doesn’t mean it’s feasible to lift any restrictions. The closure extension is required to enable Quintain to complete their work safely.

The closure enables us to coordinate work and implement the measures at the same time and is more efficient than implementing a number of phased closures that will inevitable extend the duration of work and disruption to the network.

I apologise for the inconvenience but hope you can understand we are programming the work to be completed at the earliest opportunity.

The current closure of Engineers Way is to be extended to facilitate the removal of the pedway. The original reopening date had been in place to account for the Carabao Cup that was due to be played on 28th February. The closure would have been reintroduced soon after this date to enable the works to continue unhindered and to also allow for Brent Highways to implement Hostile Vehicle Mitigation measures along Engineers Way in the vicinity of the Civic Centre. The closure will now remain in place until 15th April 2021.

Parents with children at Michaela School have been asking how long the closure of North End Road will be in place. At present staff can enter Michaela via a steep temporary staircase  from Bridge Road but pupils have to take a long detour via Olympic Way.

A request for information made to Brent Council has not yet been answered but a visit there earlier this week suggested it is going to be some time. At present the new section appears to be quite steep! 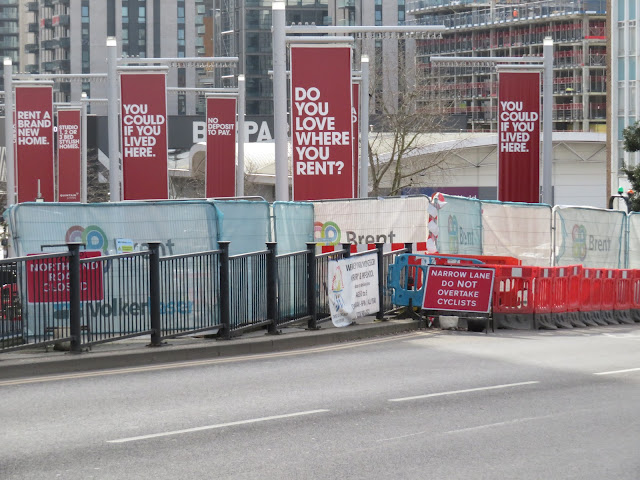 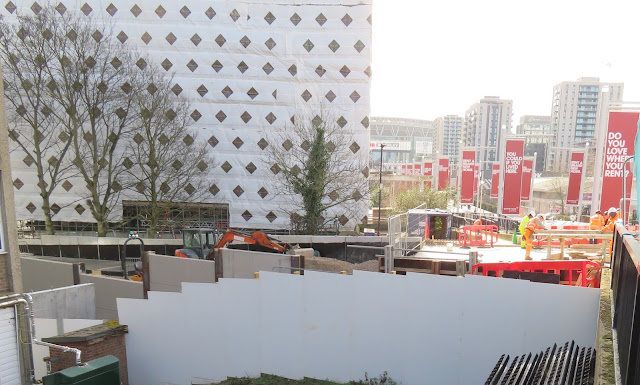 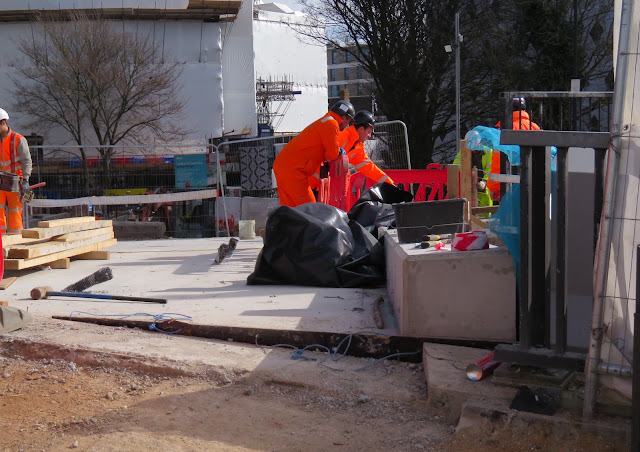 I love the banners! I bet the renters were not told that they would suffer months of inconvenience as a result of the Pedway removal. Labour Councillors gave away over £17 million of public money to the overseas owned developer to replace the privately owned pedway and then washed their hands of the problem they contributed to. Funny how the Labour Leader is not posing for photo ops by the blocked road but no doubt will as soon as a good opportunity arises. With all the massive Tower blocks still planned for the area local residents better prepare for another 10 years of major disruption.

I don't love the banners.

I think that there is a place for banners from the tall lamp posts along either side of Olympic Way on special occasions. After all, Brent's planning policies for Wembley recognise Olympic Way as 'the principal processional route to the Stadium for the vast majority of spectators going to events.'

But huge advertising banners for various Quintain "products" on all of the lamp posts, all of the time? No thank you!

I think they look hideous and dominate the street scene, to the detriment of the area.

Yes Quintain, you can have whatever your desire as you are more important to us than residents.

"The removal of the existing Pedway to release the spaces under the ramp to contribute to Olympic Way, while delivering a fully operational pedestrian access solution to the National Stadium from the north in the short and long term.The reconnection of North End Road to Bridge Road/Wembley Park Drive and through to Fulton Road and First Way to allow improved circulation in and out of the area for existing and future residents and businesses, and to provide an operational east-west route on event days"

We can also go back to our longfelt belief that the Labour Administration is bereft of any ideas for Brent other than copying their Right Wing Bedfellows.