Back in 2014 when Labour won a large majority in the Council election Barry Gardine MP for Brent North recognised the dangers of the almost 'one party' council.

The Kilburn Times quoted him regarding the result of the election:

It is a huge responsibility because a majority this big for any party means that we have to look within ourselves for the sort of scrutiny that we need of the policies that we ourselves are proposing.

We are here to be a critical voice to say where things are wrong and to set policy to change Brent for the better.

Gardiner wanted that scrutiny to come from Labour backbenchers but that has not been successful because critics are harshly dealt with (cf John Duffy, Abdi Abdirazak, Zaffar Van Kalwala) and opposition opponents resented and often insulted. Muhammed Butt does not have the same control over the opposition (although he has managed to co-opt the remeaining three Tories to a large extent) which is why he gets so angry when a young, energetic councillor (as it happens a Lib Dem) makes a splash and gains a huge amount of public support and respect - particularly when that happens as a result of a by-election after particularly grubby behaviour by the Labour candidate.

That is the background to the current spat between Cllr Butt and Cllr Georgiou (see yesterday's article.

I have no love for the Lib Dems or the Tories but in an almost one council state it is right for democracy that their right to have a different view to the administration is respected and that they are not undermined by snide comments and personal insults, and more than a hint of ageism. I am sure if our young and very able Green candidate had won he would have received the same treatment.

Wembley Matters has carried contributions from Labour, Tories, Lib Dems and Greens about local issues as I believe in debate and democracy.

Cllr Anton Georgiou has now written to Brent CEO over the letter he received from Cllr Butt: (click on image for larger view) 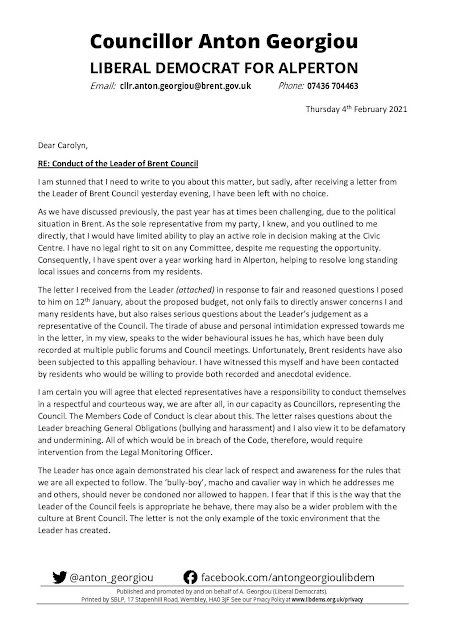 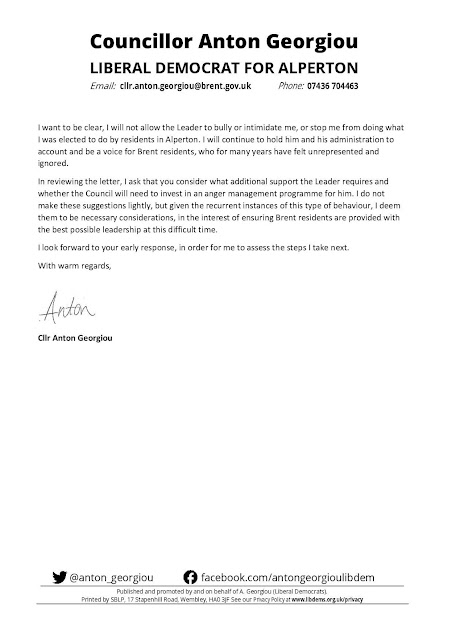 Carolyn Downs should pass this letter to Brent's Monitoring Officer, for independent investigation of Butt's conduct.

I wonder if his publishing this letter was the best idea? It’s one thing to leak political correspondence, it’s another thing altogether to drag a council official into a public spat.

Yet another publicity stunt. Where do his true priorities lie? He seems to spend more time misleading residents than actually getting anything done. What has he concretely achieved beyond his little speeches (of which there have only been 4? in 1 year) and all these letters. I for one can't see any real progress for the benefit of the residents of Alperton.

Dear Anonymous at 09:49, the Chief Executive and Monitoring Officer are the correct respondents for this complaint as surely you know. It is not a public spat, it is the Leader of Brent Council bringing his office and the Labour Group into disrepute. Shame on him.

Nice to see that the 1 Lib Dem Councillor can so rattle the Labour Leader that he needs to get his 'anonymous staffers' to join in their Leader's nasty and snide remarks. The 59 Labour Councillors in Brent collect £1 million in allowances - what have they achieved for the residents of Alperton or anyone else? At least our Liberal Democrat Councillor is prepared to stand up for us and challenge the Labour Council to clean up our streets, repair our roads and pavements and stop all those massive tower blocks blighting our lives. We have seen Cllr Butt at public meetings - he does not like being challenged on his failures and when he is - he loses his cool and is rude to everyone.

For the last year Anton has done more for Alperton that any of the previous and current Labour councillors put together. If you can’t see the effects of his work it is evident that either you do not live there, you are not talking to your neighbours, or you’re simply refusing to acknowledge the truth. (Neither of these is surprising, given the party you clearly belong to).

Anton has been in constant contact with his residents throughout the year he has been in office, he has responded to thousands of cases and has helped many Alperton residents in their council related queries, organised cleaning activities along the canal, defended our viewpoint in many planning committees.

Regardless of political party belonging, if you cannot see the wrongfulness of the situation the has developed, you are either a paid mouthpiece for the “ruling” party in Brent, or just a mindless automaton regurgitating politically biased actions that have been undertaken against Anton since the first day he has been elected as a councillor.

The original letter to Butt was public, so only fair that any reply should also be, similarly any formal complaint.

And as Martin rightly says, the use of ad hominem attacks and prejudice is totally unacceptable. A fair and even strongly worded rebuttal is one thing, but attacks on another councillor for their age and so forth are not. Butt does have history on this kind of tactic and has used it against both other councillors and residents alike. Butt is elected and ought to be accountable.

His short temper and tendency to explode when challenged is not an asset to Brent. That's witnessed by those sibsequent tweets which were childish and unworthy of someone who is supposed to be a "leader".

I am neither Labour nor Lib Dem but I've always noted that Cllr. Butt lacks manners & class in how he speaks & conducts himself in general. In my opinion it's also pointless in complaining to Brent's CEO as she'll no doubt side with Cllr. Butt as she always has done in the past. Brent Council is a 'rotten club' & as a resident of over 49 years in this Borough it saddens me to have to say these things.

This is quite an embarrassing letter. Asking the chief exec to send the leader of the council on anger management training- really?! She is clearly busy at the moment and now has to respond to this childish political stunt.

Butt didn’t mention his age. Those coming to Anton’s defence introduced that concept.

It does seem that they dislike each other enormously. That said, neither of them attacks the other in personal ways. They are both referencing performance and competence albeit in their respectively abrasive ways.

The irony/hypocrisy in people who seem to despise Butt (to an irrational, almost ugly extent - “POS”, Alison?) falsely claiming that Butt’s response was an unfairly personal attack on Anton - it’s absurd.

Brent desperately needs a credible opposition. Looks like we’re going to have to wait a little longer before one presents itself.

Cllr. Georgiou IS the current opposition.
Muhammed Butt has surrounded himself with sycophant yes-people who seem to be incapable of standing up to him.I've witnessed his blustering aggressive outbursts when people do challenge him, and its totally unacceptable for the leader of the council to behave in this way. Cllr Georgiou has clearly 'rattled his cage' and Muhammed Butts response is rude, patronising and should be viewed as attempted bullying.
I, like many other Brent residents are sick of this administration's failure to respond to the wishes of the community, and continuing their policy of building massive tower blocks throughout the Borough with little or no infrastructure to support the rapidly-growing population. Cllr Georgiou seems to be the only person who is prepared to stand up against this policy, and for this he is constantly abused both verbally, and in writing by Muhammed Butt. The Leader of Brent Council has already had to make a public apology for breaking lockdown conditions. He should now issue a second apology as his letter clearly breaks the Councillors Code of Conduct.

Butt has history for attacking Anton for his apparent age. And for other things too. That started, oh, almost a decade ago.

He has history for attacking many others, me included, as well as his "own" councillors. He loathes being challenged or questioned.

I disliked Ann John's policies, but she would never have dreamed of doing that - and she was a pretty robust Leader to say the least. The way she was treated by Butt was a disgrace and a betrayal. Butt also dumped officers who got in his way, most notably Gareth Daniel, who was too decent to survive.

My dislike of Butt is entirely rational and based on his actions both personally specific and broadly general. There's some short and/or selective memories here - Cara Davani, anyone? Or numerous other things which the Teflon coated one has managed to avade the consequences of. So far.

Unlike others, I don't post anoymoously, either here or on Twitter - so yes, I stand entirely by what I've said about Butt.

His face when Anton won Alperton was a picture of fury - and he brought that defeat entirely on himself, through sheer arrogance.

One might ask why someone with a huge majority feels so threatened by one solitary younger councillor, of course.

For anyone who does not know what Alison is referring to when she mentions Cara Davani in her 13:52 comment above:

Many thanks Philip. It's worth rereading.

I can't help seeing a similarity between the former Labour councillor John Duffy
(who wasn't afraid to speak his mind) and the Lib Dem Cllr Anton Georgiou
who is also known for criticizing decisions made by the Labour cabinet.

Time will tell if Cllr Georgiou ends up being ousted as a consequence for being brave enough to lock horns with Cllr Butt.

Hi Trevor. Muhammed Butt ousts members from his own party where he has some control. He has no control over Cllr Georgiou who is answerable to those who elected him in Alperton ward and presumably the local Lib Dem party. As an opposition councillor he has the freedom to criticise the ruling administration and is exercising that freedom. How he does that and the evidence he cites can be debated but his freedom to do so cannot be taken away from him. Cllr Butt's inability to tolerate even one critical voice and his urge to silence it is not good for democracy.

Anton’s prime responsibilities are to his residents.

I can’t think of one instance as a councillor where the local party or group asked me or told me not to do something. The only sanction is if you break the undertaking about , oh, racism say.

It is irresponsible to portray this argument as an attempt to silence a critic. The critic has the right to criticise. The criticised have the right to respond. Both are accountable for the things they say.

Anton declined an invitation to more fully participate in the democratic process. Butt literally invited him to attend and speak his mind - hardly an act of intolerance or an effort to silence.

You do good work on here, Martin. Apart from when it requires objectivity towards Muhammed Butt. You do not appear to like him very much (maybe for good if unstated reasons?) and that seems to cloud your judgment when commenting on matters such as this.

Cabinet meetings are not a democratic process.

How pathetic are the Labour commentators that they could never oust Butt despite how inept he is.

Vested interests. He has full patronage and power.