As I am “staying at home”, and not out and about to notice what is going on, I usually have a quick look at the “Legal and Public Notices” in the online edition of the “Brent & Kilburn Times” each week. One entry in the planning notices last week caught my eye; an application (ref. 21/0379) for ‘Removal of condition 13’ from a planning application (ref. 17/4877) which was approved in February 2018. 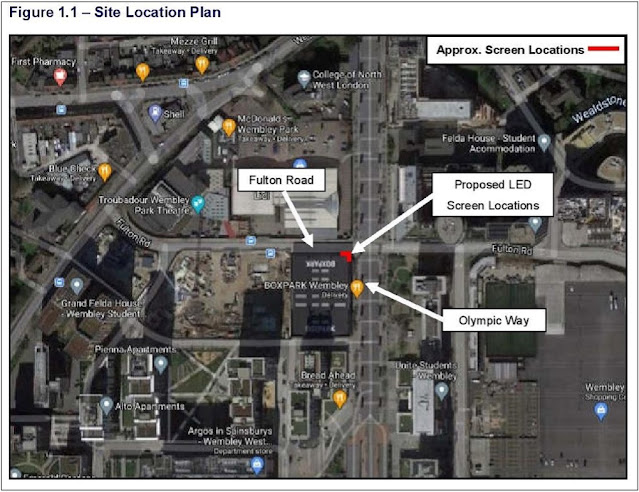 The location turned out to be the Boxpark building, at the junction of Olympic Way and Fulton Road. But what was the planning condition they wanted removed?

‘Condition 13: Moving images shall not be displayed on the Fulton Road façade and the northern section of the Olympic Way façade of the building (within the area marked as ‘Zone A’ on drawing no. A00_MIC_01 P2007903) at times when Fulton Road is open to vehicular traffic, unless otherwise agreed in writing by the Local Planning Authority.’

The applicant, Open Outdoor Media Ltd, wants that condition removed, so that it can display ‘full-motion advertisements’ on the large LED screen mounted on the north-east corner of the Boxpark building all of the time. At the moment, the screen which they installed there in 2019 can only be used to display static advertisements, apart from 90 minutes before and after major Wembley Stadium events, when Fulton Road is closed to vehicular traffic. 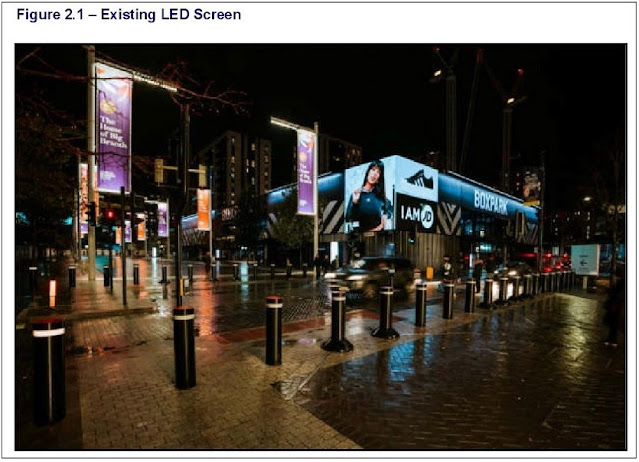 The LED advertising screen (‘I AM JD’) at the corner of the building, from an application document.

Why was that condition there in the first place? The answer is clear from the Report to the February 2018 Planning Committee meeting:

‘Highway safety: The Council’s Transportation Officers have expressed concern about the highway safety implications of displaying moving images readily visible to drivers using adjacent roads. In response to their concerns, a condition is recommended to ensure that moving images are not displayed on the Fulton Road façade and the northern section of the Olympic Way façade of the building at times when Fulton Road is open to vehicular traffic.’

So what is different now? Planning agents on behalf of the applicant have submitted a glossy report by the Manchester-based S-C-P Transport consultancy (‘Driven by the desire to help clients achieve their goals’). This looks at the highway safety aspects of the latest application, both at the Fulton Road crossing, and with case studies of other sites (mainly in the North and Midlands) where full-motion advertising screens have been installed near roads.

Their thorough review includes research, such as this:

‘In order to identify critical locations on the network with a poor accident record, the personal injury accident data has been obtained from the online resource CrashMap for the most recent 5-year period, ending December 2019.’

They found that, during that five-year period, only ‘one accident took place at the Fulton Road / Olympic Way crossing, which resulted in “serious” severity injuries.’ Their conclusion was:

‘Whilst all accidents are regrettable, the evidence … suggests that the area in the vicinity of the site does not have any recurring highway safety problems that could be affected by the development proposals.’

Their report does admit that the LED screen was only installed at the end of June 2019, and then was not displaying any moving adverts while vehicles were using Fulton Road during the six months to December 2019. However, as the serious accident on the crossing took place during the previous 4½ years, they claim it demonstrates that the LED screen advertisements ‘have not led to any material increase in accidents.’ 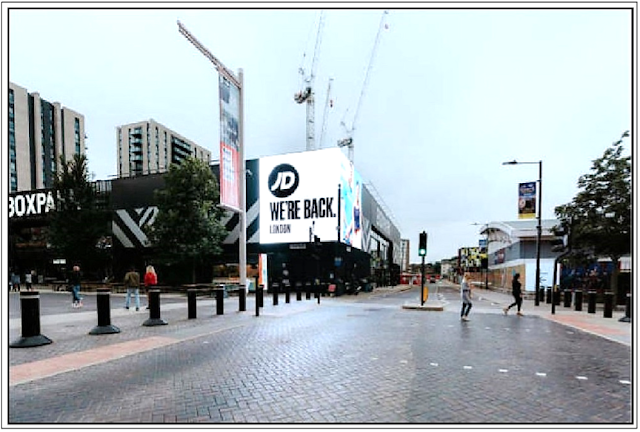 The view along Fulton Road towards the Olympic way crossing, with the bright LED advertising screen (‘JD WE’RE BACK’) on the corner of the Boxpark building, from the S-C-P report.

The case studies (as you might expect) show that putting full-motion advertising screens near busy roads does not tend to increase the number of serious accidents or injuries. But although the amount of vehicle traffic along Fulton Road is not as great as a city centre road in Manchester, Liverpool or Nottingham, the number of pedestrians walking up and down Olympic Way, and crossing Fulton Road, is very large. It is also likely to increase even further as more and more Wembley Park developments are completed.

It would only take one driver of a bus or heavy lorry coming along Fulton Road, or one pedestrian walking up Olympic Way from the station, to be distracted by a moving advert on that screen at the wrong moment, for a serious accident to occur. In my opinion, even one such accident would be one too many.

As advertising is involved, the screens also had to obtain advertisement consent, and the approval of that application (ref: 18/1796) contained an identical condition to “Condition 13” in the Boxpark planning approval. The agent’s covering letter with the latest application acknowledges the reasons given in the Planning Report for that:

‘Concerns were previously raised with regard to distraction of drivers from moving images along the Fulton Road frontage and the northern end of the Olympic Way frontage, with road safety studies undertaken by the Transport Research Laboratory highlighting the significantly greater impairment to driving performance presented by moving images, as compared to static displays.’

Despite this, the letter goes on:

‘The applicant is however of the view that the provision of full motion images on the LED screens would be entirely acceptable in terms of public safety and highway safety and that Condition 13 of 17/4877 should be removed and an amended application for advertisement consent be issued.’

That view is unsurprising, because the application would not have been made unless Open Outdoor Media Ltd thought there was a chance that they might get that condition removed. And if it is removed, they will, of course, be able to generate more profits by selling full motion advertisements, rather than just static ones.

Surely, this latest application will be rejected, on the same public safety grounds that saw the condition imposed in the first place, won’t it? Having looked at Brent’s planning website, I do have some concerns, including that the expected decision level is “Delegated Team Manager”, rather than the borough’s Planning Committee which decided the original application.

A greater concern is the amount of consultation on application 21/0379. The list of those consulted on the application only contains two addresses. The first is Brent Civic Centre (the Council’s Transportation Unit has been asked to comment). The second is 180 Great Portland Street, London W1W 5QZ. Puzzled? That is the registered office address of Quintain Ltd (joint owners, through BPQW Ltd, of Wembley’s Boxpark business).

On the original application, consultee comments on public safety matters had been submitted by the Metropolitan Police and by Brent’s Public Safety Manager. Why were they not consulted this time? And what about consulting Wembley Stadium, the residents’ associations for blocks of flats whose leaseholders use the crossing on a daily basis, or the owners of student accommodation buildings in the area? It’s almost as if Brent’s planners wish to avoid there being any objections to this application – but that can’t be right, can it?

In my opinion, the risk of death or serious injury at this location is too great for this application to be approved, so I have submitted an objection. If you agree with me, you can make your objection on the Council’s planning website for application 21/0379.

NEW DEVELOPMENT ON THIS CASE - FOR INFORMATION

If you try to use the link to planning application 21/0379 above, you will now find that the page has a message:

'Planning Application details not available. This application is no longer available for viewing. It may have been removed or restricted from public viewing.'

The details, including my objection, were there this morning, but I received a message from the planning Case Officer, after she had read my objection comments and taken a closer look at the application:

The planning application, which Brent's planning department received and "validated" (as being properly completed) on 3 February 2021, has now been declared invalid!

I have asked whether the application, if resubmitted (as it almost certainly will be) with the necessary clarification on which screens it is referring to, will be given the same application number (21/0379), or whether I will have to submit a fresh objection.

I have also suggested that when a fresh consultation is started, more people need to be consulted on it!

Further to my "for information" comment yesterday, I have received this further response from the Case Officer, which I am sharing for readers' information:

'The above application is now invalid but I’m anticipating that the applicants will submit amendments so it may be made valid soon. It is likely to keep the existing reference number and I will let you know if it is made valid.

There will be a discussion within the Planning Department regarding the appropriate scope of consultations. We appreciate your comments which will be taken into account.'

It's nice to be appreciated by Brent's Planners - it often does not feel like that!

Is there anything in it for Brent Council or Labour Administration? We will see won't we?