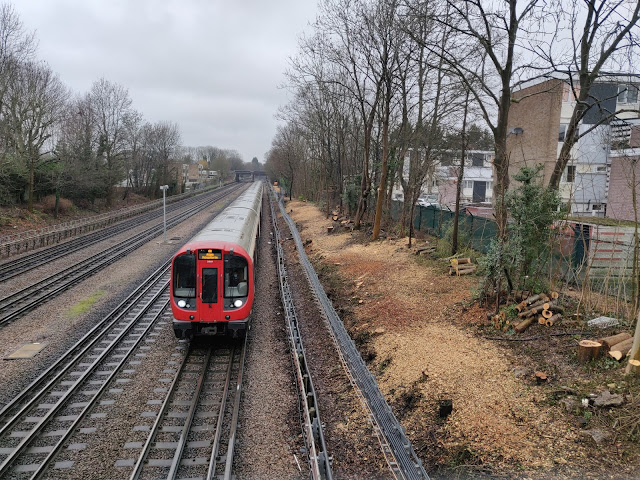 A petition has been launched asking Transport for London to take a more ecologically sensitive approach to trackside maintenance. Safety must be considered but there is no justification for a scorched earth approach. Clearances like the above have already been seen along our stretches of the Metropolitan, Jubilee and Chiltern lines.

Introduction to the petition

TFL contractors have been repeatedly reported removing miles of trees and vegetation running along London’s Underground tracks, most recently along the Metropolitan and Chiltern Lines. These acts of environmental vandalism mean rich, green corridors are severely reduced, impacting residents’ health and mental well-being, as well as removing biodiverse habitat for local wildlife.

With 55% of the London Underground track network recorded above ground, we recognise a need for trackside vegetation maintenance, but the actions of TFL contractors are often excessive and unnecessary.

They are treating these rich, green corridors as more of a liability than an ecological asset in which to invest.

London Underground’s existing green infrastructure amounts to 10% of all green spaces in the city and is an obvious way for the Mayor of London, Sadiq Khan to meet his commitment to improving London’s “biodiversity and ecological resilience” and become the first National Park City. We are in a climate and biodiversity emergency and both the Transport for London and Sadiq Khan must do everything they can to protect the habitat and wildlife we have remaining in London.

To: Mayor of London, Sadiq Khan


We call on TFL and the Mayor of London to commit to the following:

2. Ensure that TFL carries out biodiversity surveys before trackside work begins and that these are made easily accessible to the public.

3. Ensure that local residents are informed in good time before trackside work begins and given time to feedback questions and concerns to TFL.

4. Ensure that TFL contractors are trained in effective vegetation management and biodiversity preservation.