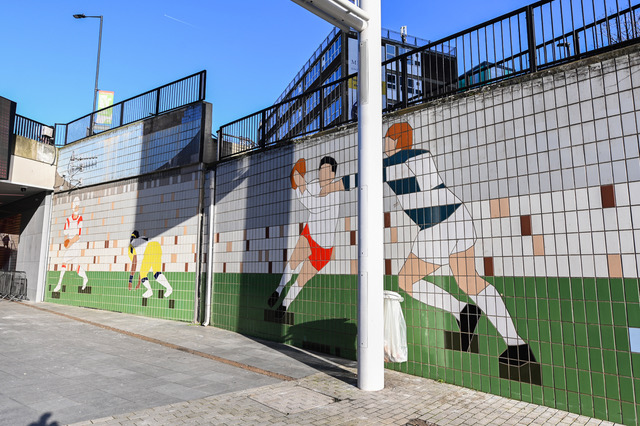 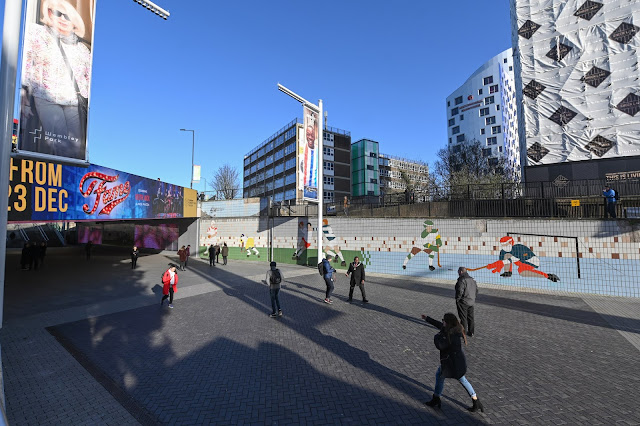 Just two weeks ago Philip Grant wrote about the 'dodgy deal' behind the covering over of the famous sporting and musical tile murals at Bobby Moore Bridge at the Olympic Way pedestrian route to Wembley Stadium,

Now Brent Council has published a press release advertising that the mural will be partially uncovered for just three weeks. It is good that Brent Council is now recognising that these are 'heritage' but that makes their covering up  action even more inexplicable.

Extra areas of the heritage tile murals outside Wembley Park station will be revealed from the 10th to 28th March, as part of an annual display.

The colourful ceramic tiles, which show scenes from famous sports and entertainment events at Wembley Stadium and the SSE Arena, Wembley, date back to 1993 when they were originally dedicated to the legendary England football captain and 1966 World Cup Winner Bobby Moore.

Mayor of Brent, Cllr Ernest Ezeajughi, said: "I'm delighted that residents living close to Wembley Park and our amazing keyworkers who are still travelling into work will be able to enjoy these wonderful murals during the month of March. We may not be London's Borough of Culture this year, but we remain the borough of cultures, including the major events we host in Wembley. It's great to showcase that and pay tribute to some of the icons of our recent past especially as we start to look forward to the Euro football finals coming to the stadium this summer."

The first scene outside the subway shows American Football players.  Many people think that the sport at Wembley Stadium started with the first NFL game there in 1983, with matches played annually at the new stadium since 2007. However, its history goes back a further 40 years, to the Second World War when two U.S. Forces teams played.

The middle scene shows a tackle involving two rugby league players. The Rugby League Challenge Cup Final was first played at the Stadium in 1929. It proved very popular, as a great day out for supporters. The final was played annually at Wembley (apart from during the Second World War) until the old stadium closed in 2000, and it has been a fixture at the new stadium since 2007.

The Empire Pool (now Arena) was built in 1934, as a year-round venue, for swimming in the summer and ice hockey and public skating in winter. It got its name because the first event held there was the swimming competition for the 1934 British Empire Games. From the autumn of that year, it was home to two ice hockey teams, the "Wembley Lions" (who played there until 1968 and were national champions four times) and the "Wembley Monarchs".

It's good to see the information about the three tile mural scenes which will be on display for three weeks.

Although not acknowledged, this is what I wrote for Brent's Communications Team before they were "revealed" for five weeks at the start of Brent's year as London Borough of Culture in January 2020.

I hope that a short video about these murals, which I am working on with Brent Museum and Archives, will be available soon - I will ask Martin to share it with "Wembley Matters" readers as soon as it is ready.

We should all be very grateful to Philip Grant for fighting for this. From recollection the Bobby Moore Bridge and the upgrading of Wembley Park Station is a legacy of Paul Daisley who became Leader of Brent Council as part of the partnership with the Liberal Democrats when I was the Lib Dem leader in mid 1990s.

It would be the decent thing for Brent Council to acknowledge their mistake in entering into a secret deal with Quintain which allows for these Sporting Murals to be covered up for most of the time.

Perhaps the current Leadership of Brent Council should be reminded of the good work of some of their predecessors - and do the right thing.