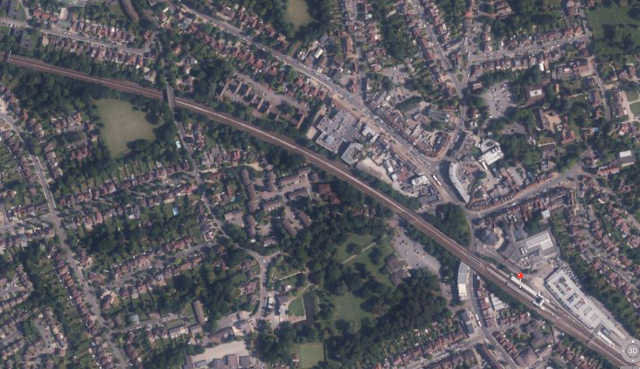 Just over a week since its launch, the petition calling on Sadiq Khan and the TFL to ‘Stop the Removal of Green Habitat’ has garnered over 500 signatures LINK .

This response shows that the wholesale destruction of habitat along our London Underground embankments is strongly opposed by many people from across London and the rest of the country.   We have heard numerous similar stories to the one most recently reported on along the Metropolitan line near Pinner LINK, from Wimbledon Park on the District Line LINK , to Hackney Downs and stations along the Overground Line LINK  and along the West and North of the Central and Piccadilly Lines.  These reports reveal a similar lack of public consultation with local residents and the resulting distress caused by the destruction and removal of sound and visual barriers that had been provided by the lineside foliage.  There has also been an absence of ecological surveys carried out by TFL before work commences, with contractors obliterating everything in their paths and showing little awareness of the biodiversity or wildlife they are displacing, including nesting birds or badger sets.

Network Rail has also been accused of devastating much of its lineside embankment greenery over recent years, carrying out a “secretive nationwide felling operation”, as reported in The Guardian 2018 LINK .

This has caused much upset with both residents and train passengers, who have repeatedly decried the raising to the ground of the once verdant banks running along the hundreds of miles of our national train network.  The destruction along Lincolnshire railways in 2019 even led Tory MP, Sir John Hayes to state that the trackside vegetation removal looked like “a scene from Hiroshima” and to call for an urgent meeting with the then Environmental Secretary, Michael Gove LINK.

In response to public pressure, Network Rail published a new environmental sustainability strategy in December 2020, including a ‘Biodiversity Action Plan’ LINK .  This plan contains a bold vision to improve the biodiversity of plants and wildlife lineside, committing “to the key goal of no net loss in biodiversity on our lineside estate by 2024, moving to biodiversity net gain by 2035”.  This culture change within Network Rail, viewing lineside vegetation as an asset, not a liability, must urgently be adopted by TFL and the Mayor of London when managing London Underground lineside vegetation. The last London Underground Biodiversity Action Plan (LU’s BAP) was published in 2010 LINK  and consequently urgently needs to be addressed and updated.  TFL must use the recent Network Rail example to rethink its biodiversity management policies to meet their commitment to protecting and enhancing London’s wildlife and green spaces.

Darren Johnson, Green Party Assembly Member 2000 and 2016 and Deputy Chair of the Environment Committee, overseeing the 2012 ‘On the Right Lines?’ report  LINK , has backed our campaign, commenting on the petition: “Very happy to support this. Something I worked on when I was a London Assembly Member. Of course, vegetation removal is vital for rail safety, but the scorched earth approach is not the way.”  We have been overwhelmed by the support for the petition and many comments left, revealing how strongly people feel about this issue and their desire for TFL to change their policy on excessive vegetation embankment clearing and the need to replace it with a more nuanced and sustainably managed policy, which recognises and values these precious green corridors.

See below a selection of people’s comment on the petition:

·      “The opportunities for ecological enhancement and support of biodiversity along rail lines are huge and cannot be overlooked! Partner with those who know, care and have the energy and resources to support projects.” Lisa Shell

·      “We’re in the midst of a climate and environmental emergency and losing wildlife and biodiversity at an alarming rate. This type of habitat loss in totally unacceptable and must be stopped.”  Jean Gerrard

·      “Dreadful situation! I live right next to the train lines. The noise is really bad now and I can see all the passengers on the train from my kitchen window.  Such a sad loss of greenery. The birds have been going crazy too. What is TFL doing about rectifying this? I'm heart broken.” Pauline D’Jemil

·      “Please stop this unnecessary assault on what is left of our green spaces.” Ann Wilson

·      “Stop making the world into a concrete jungle!” Asha Osman

·      “So depressing to see. Is there any one in authority who cares about our environment?” Jean Pannell

·      “Please try and think more creatively. Safety is a priority but there are surely alternatives that could be adopted. Shrubs and under planting wild grasses and low growing flowers etc.” Julie Curtis

·      “This has to stop; the railways are a natural wildlife corridor and should be protected from excessive and unnecessary cutbacks.”  Paula Hermes

·      “Vital for so many reasons. We all know what they are. Please stop cutting down the beautiful vegetation. It’s always such a joy to see.” Sarah Holford

·      “Stop destroying everything. Everywhere I look I see deforestation, destruction, the silent absence of life. Rail verges are one of nature’s last remaining lifelines. It costs nothing just to let it live. For our children and for the climate, please just stop this mindless destruction.” Anna Scrivenger

·      “We need these green corridors to cut pollution, keep noise down and a respite for nature.” Linda Quin

·      “Why on earth?? Railway embankments are some of the few untampered wildflower habitats left - leave them alone!!” Kate Hopkins

·      “I should like to see evidence of 'problem' trees and certainly do not want ANY vegetation removed in future without a previously approved assessment.” Keith Gissing

·      “We are losing trees and green spaces at an ever-increasing rate. Please don’t make things even worse.” Linda McKeller

·      “Yes, stop cutting our trees down HS2 is doing enough damage to our nature.” Erica Locke

·      “We are currently seeing an unprecedented number of wildlife habitats decimated. Clearing TfL railway corridors of trees and hedges just adds to that and our climate crisis. Please consider planting more vegetation and maintaining what you have.” Elaine Persell

·      “I realise that trackside trees shouldn’t be a safety’ threat, but recently the decimation of lineside vegetation has been completely over the top.” Terry Hooper

·      “This is criminal. I know safety is paramount, but this is more than that. Losing pollution soaking trees, habitats, shade, aesthetic enhancement is wrong.”  Polly Mortimer

·      “We need every INCH of green in this supposed green and pleasant land, especially in London which would choke on its own effluent if not for the green spaces as yet untouched by speculators. In a world where homeowners are ripping up their gardens to put down gravel, we need green that produces fresh air more than ever.”  John Mangan

·      We desperately need more biodiversity in our cities! Please use your brains and think of what you'll be leaving for future generations.” Julie Barber

·      “It's very important that Sadiq Khan shows us that he will stop the degradation of our precious environment, otherwise he'll not be voted for again!” Miranda James

·      “Every tree possible is needed for reducing pollution and climate change and for wildlife habitat. Please stop cutting them down.” Lisa Penney

Thank you to everyone who has signed the petition so far.  Please sign if you haven’t yet already done so. Thank you, Emma Wallace