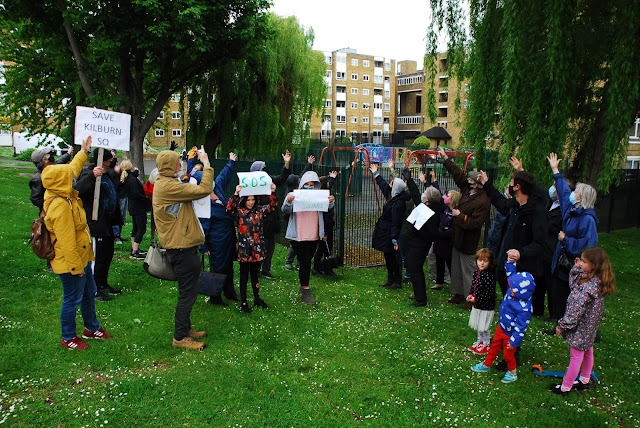 An article in last Wednesday's Guardian LINK on growing opposition to London council's plans to meet housing quota by building on green space and playgrounds rang a bell with campaigners opposing plans to increase the amount of housing on the Kilburn Square Co-op council estate by over 80% with the potential loss of  much valued green space.

Keith Anderson, Chair of Kilburn Village Residents' Association, was moved to write to the Guardian on how such proposals affected this corner of Brent close to the traffic laden polluted Kilburn High Road.

This is the letter that is awaiting publication:

Last October, Brent announced to some residents a Plan for an extra 180 Council flats in an “Infill” development. Infill may be accepted jargon to housing insiders; but it’s a laughable euphemism in this case. Together with a new block completed last year, this Plan would increase the number of flats by over 80% compared with the original estate.

A 17-storey tower (right by the highly-polluted A5 Kilburn High Road), plus four further medium-rise blocks – removing green space and a number of mature trees, encroaching on a playground – does that sound familiar…?.

Our Association has been arguing that this would be serious over-development; the draft Local Plan had a suggestion, with limited elaboration, of a project on less than half this scale. This Plan would transform the Estate’s character and there’s no clear evidence that it would respect norms of amenity space per resident. We have so far been denied sight of any of the surveys and analyses on which the Plan is supposedly based. An extract from a pre-Covid parking survey showed it had wrongly assumed Brent residents can park in neighbouring Camden!

As elsewhere in London, Brent cites housing need and its ownership of this land – but how does that justify ignoring the wellbeing of all the current residents?

The project team’s attempts at pre-consultation on the estate have been ineffective: poor uptake for “Resident Panels” and a low response rate to a questionnaire; and questions merely about design details, with the overall scale a taboo subject.

Unlike the Southwark project, this one is not yet at formal Planning Application stage.  So is there a ray of hope? Brent’s Cabinet Housing Lead has assured a local paper that “no decisions have yet been made” and the Director of Housing told a recent Scrutiny Committee meeting that Brent “would not want to force homes on anyone”; but there’s no sign of a resident ballot. Consultation with the wider community has been postponed while the Project team “review the designs”. That hardly sounds like a major rethink on the project scale…

For full information about the Kilburn Square proposal see  https://save-our-square.org/