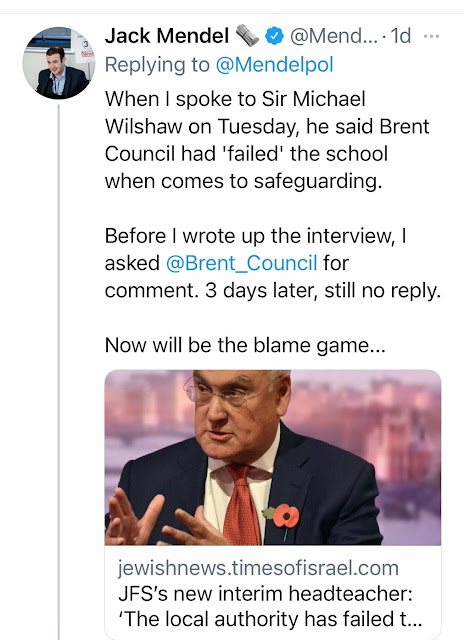 Last Saturday LINK I reported the news that Sir Michael Wilshaw had taken over as Interim Executive Headteacher at JFS secondary school, a Jewish orthodox religious school in Brent but with a much wider catchment.  JFS’s foundation body is the United Synagogue and its religious authority is the Chief Rabbi of the United Hebrew Congregations of the Commonwealth. The headteacher had resigned and it appeared that the safeguarding of pupils was an issue.

On Tuesday of this week in an interview with Jewish News LINK, Wilshaw claimed to have already improved the school but blamed Brent Council for not intervening earlier:

When they knew there were issues around safeguarding and mental health issues, they should have been in here monitoring the situation – well before Ofsted. The local council has failed this school, there is no question about that in my mind.

This was followed on Wednesday by publication of  unattributed responses from Brent Council published in Jewish News LINK.

But it is understood that senior figures within Brent Council have reacted with “outrage” at the interim headteacher’s claims.

Sources within the local authority point to the 2016 Ofsted report into JFS, that was published during Wilshaw’s stint as chief executive with the official education inspectors.

They pointed to the fact that the 2016 report described safeguarding at JFS as “effective” and added that pupils “knew where to seek help” if needed.

They same sources also insisted it has been Brent who had intervened “very recently” to ask Ofsted to look at the school over safeguarding concerns.

One source added: “It is laughable to read Michael Wilshaw suggesting he has managed to turn a school around in a matter of weeks.

“Senior figures at Brent are meeting to decided how to respond to his comments, but the feeling is there are far bigger issues at stake here that Mr Wilshaw.”

On Thursday  Jewish News in an 'Exclusive' LINK published extracts from the Ofsted report on JFS which deemed the school 'Inadequate'. The report has not yet been published on the Ofsted website so please treat their summary with caution:

A spokesperson for the United Synagogue told Jewish News:

This is a very distressing Ofsted report and one which we know will make very troubling reading for parents, students and staff. Notwithstanding the positive findings about the school’s education and sixth form, the serious failings found by Ofsted demand urgent attention. We acknowledge the governors recognise this and have already taken steps to improve safeguarding in particular. We will be working with the school to ensure the programme of improvements continues at pace.

In my view there appears to be some singling out of Brent Council for blame in the media when responsibility should be much more widely shared. The 'blame game' should not divert the partners involved from the main priority of safeguarding pupils and putting measures in place for addressing the mental health of those pupils who have suffered from sexual harassment in the past.

No support for a school by Gail Tolley and Brent.