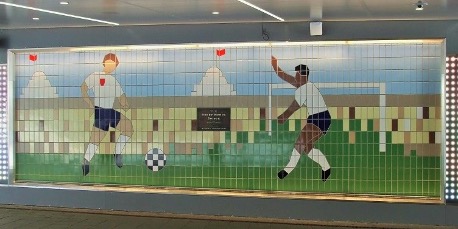 It  turned out that  Debra Norman's letter to Philip Grant LINK  cutting off any further correspondence about the campaign to keep the football mural on permanent public view  was not quite the last word. Following Philip's persistent correspondence and forensic analysis of Brent Council planning documentation. along with emails of support from residents, Brent Council Chief Executive, Carolyn Downs, has written to Philip.
Although the email still claims to uphold the Council's view over advertisement consent, Ms Downs has now asked for, and received, Quintain's promise that they will not cover the "footballers" mural with adverts for the rest of their lease (up to August 2024).

Dear Mr Grant,
I have spoken to both the Leader of the Council and Councillor Nerva before responding to you, as you requested.
The Council has taken your representations on this matter very seriously. It is not just Brent’s lawyers but also external legal advice which aligns with that of the council regarding Quintain’s right to advertise over the football mural.
Because the Council values the mural very much and because we have requested of Quintain that it remain on view, and because they too value it, it has now been on display for a considerable period of time and has not been covered by advertising. Furthermore Quintain have confirmed to me in writing that they do not intend covering the mural for the remaining period of the lease.
I concur with Ms Norman that we have spent enough time corresponding with you on this matter particularly given that the mural will remain on view and that is what you have sought to achieve.
Yours sincerely,
Carolyn Downs
Chief Executive

Philip is a Hero of Brent without doubt

Why on earth do these Brent officers have to be so begrudging when it is obvious what is the right thing to do - do they get it off the Leader we wonder? At least Quintain aren't as mean.

To Martin, for his support throughout this campaign, and always being willing to publish "yet another blog", so that I could keep people fully informed about what was happening.

To Nathalie and Adam, for the coverage in the Kilburn Times and Harrow Times, which helped to raise public awareness of the murals, and the risk of the footballers mural being covered up.

Thanks especially to those of you in the Brent Community who have given me your support and encouragement. Knowing that I wasn't fighting a lone battle helped me to carry on, and when that battle reached its "final showdown" this week, many of you sent emails to Brent's Chief Executive and Leader, which helped to swing the balance our way.

I am still composing my letter of thanks to Carolyn Downs, but will put a copy of it in a comment below once I've sent it to her.

This is the full text of the email I have sent to Brent's Chief Executive this evening, in response to her email shown in the blog above:-

Thank you for your email, and for ensuring that the “footballers” mural in the Bobby Moore Bridge subway will remain on permanent public display until at least August 2024 (and, hopefully, forever!).

I agree that this correspondence has gone on long enough, and can confirm that this will be my final email to you on this particular matter. I would simply ask that you read this email, please, and send me a brief message to confirm that you have done so.

I welcome your assurance that the Council and Quintain value this tile mural. More than three years ago, Wembley History Society called on you both to put all of the Bobby Moore Bridge heritage tile murals back on permanent public display. I hope that both Brent Council and Quintain will support the opportunities which will arise over the next three years to do that.

As you are Brent’s Head of Paid Service, I must respect your public support for the Council’s lawyers over the advertisement consent dispute.

I hope that, privately, they have thanked you for “saving face” on their behalf, and apologised for the inaccurate advice which they gave you.

If you had not found a satisfactory way to ensure that the “footballers” tile mural remained permanently uncovered, I would have felt obliged to make a formal complaint. That would, almost certainly, have ended up in the hands of the Local Government Ombudsman, to investigate Brent Council’s (alleged) maladministration over this matter.

You may not be aware of your legal department’s handling of a Freedom of Information Act request I made in April. As the key issue in this matter has now been resolved, your Legal Director should be grateful that I will not be appealing to the Information Commissioner in response to the Internal Review she sent me on 7 June.

That she had added “vexacious” as a reason for refusing my request was an abuse of the Council’s powers under that Act. Section 14(1) states: ‘Section 1(1) does not oblige a public authority to comply with a request for information if the request is vexatious.’

There was no way in which my FoI request could be considered to be ‘vexacious’, even if Ms Norman believed any of my other actions in pursuing our dispute had merited that description (a view which I strongly refute). It was simply a request for information!

That information would help me to decide whether I had failed to take into account any facts or evidence that would enable me to agree with the Council’s view. Alternatively, if the Council had failed to provide all of the relevant facts and evidence when seeking external legal advice, it might undermine the validity of that advice.

As your legal officers have refused to provide the information requested, I will never know; but based on the evidence I brought to your attention in my email of 7 June, I suspect it was the latter!

On a final point, arising from the way which some of your officers have dealt with this matter over the past few months, I think there is a lesson for the Council to learn from the mistakes which have been made. There are times when I have been told, though not in these words, to “shut up and go away”.

When residents of our borough persist in trying to make Council officers understand, they have a reason for doing so, even though it may feel as if they are “a nuisance”. I know that I’m far from alone in experiencing this attempted “brush-off” treatment, from officers in a variety of your departments. I am relatively resilient, and articulate enough to stand up for myself, but there are others less fortunate who do suffer because of this type of attitude and practice.

If Brent is to become the Council it aspires to be, in the service of its community, it does need to improve in that area. I will leave you to consider how best that can be achieved. Thank you. Best wishes,